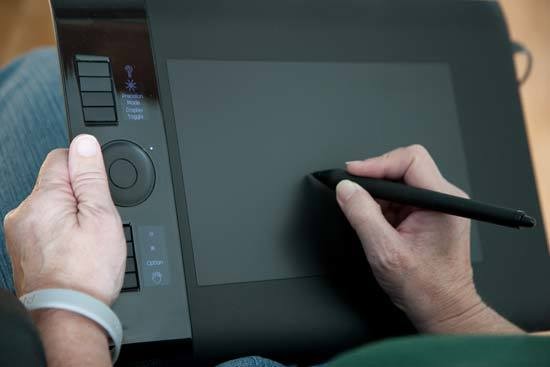 Graphics tablets are popular options for digital image editing and other graphics work where a mouse just doesn't give you the degree of control that you'd like, or need. Wacom is arguably the most popular brand of tablet available with a wide following among serious photographers and artists. They have several different lines of tablets, from the enthusiast level Bamboo series, up to the active display Cintiq line that lets you draw right on the monitor. The most popular line though are the Intuos series of tablets, and that's where Wacom has dominated the market for the serious graphic artist and digital photographer.

While the Intuos3 line of tablets has been a very popular and well-regarded device, Wacom hasn't stopped enhancing their products. The newest release, the Intuos 4 brings a number of well designed upgrades and improvements in the ease of use. The Intuos4 is available in several different sizes suitable for a variety of uses – small, medium, large, x-large. The sizes correspond to the previous tablets though, but should be a little easier to decide on which one to use. For graphic artists, and those that do a lot of painting, a large or x-large tablet is a good choice. For photography, I find that the medium tablet, with an active area of about 6"x9" is ideal and a good compromise between size and comfort.

If you've used the Intuos 3, the first thing you'll notice is the Touch Strip and ExpressKey buttons on each side of the tablet that have been replaced by a single row of buttons and a Touch Ring (Figure 2).  There's an advantage to this new layout. You'll no longer find yourself accidentally hitting the Touch Strip (which I did frequently). While this might seem like a drawback for left handed users, Wacom has addressed this by making the tablet reversible. There are two USB ports on the tablet, one for right hand, the other for left hand orientation. To use the tablet for the opposite hand, simply turn it 180 degrees and set the control panel to left or right to match the orientation.

The eight buttons have been pre-programmed with common functions – Help, Display Toggle (For users with multiple displays), Shift, Command/Control, Option/Alt, and the Hand tool (space bar). The Touch Ring scrolls windows in most applications, and in Photoshop defaults to zooming the display. At the center of the Touch Ring is a toggle button to change the wheel to one of the four available functions. All of the buttons have an OLED next to them that shows the currently selected function for that button. When the tablet is flipped over for the other hand, the text is rotated as well, so it's always in the correct orientation for the user. 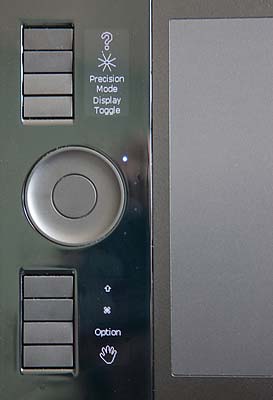 Along with the changes to the tablet controls, Wacom has doubled the sensitivity of the pen from 1024 levels to 2048.  A brand new pen is supplied with the tabletThe new tip sensor requires only one gram of pressure to start working, making extremely fine points or lines possible. The end result is that the pen has a more natural feel. Wacom includes replacement tips, or nibs, for the pen in standard, felt, stroke, and flex responses for a wide range of uses. In a nice touch, the pen holder (Figure 3) is now the container for the nibs, making them much less likely to be lost (which I have always been very good at doing). 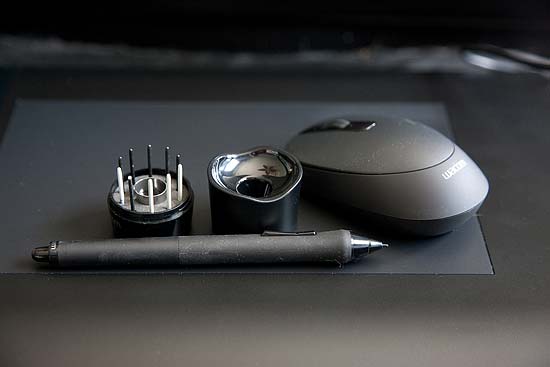