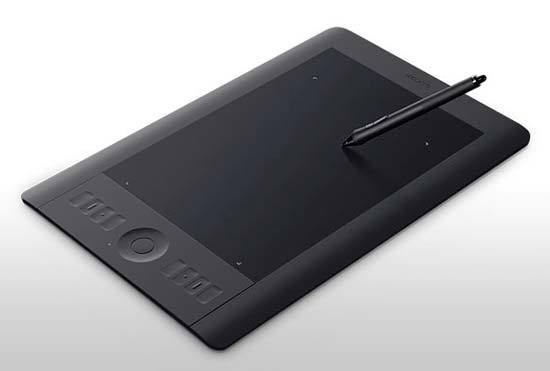 The Wacom Intuos5 comes with a pen that can be used to draw with one end or erase with the other. On the barrel of the pen are two buttons that works the same as mouse buttons for left or right clicks. The included pen stand doubles as a holder for 10 extra nibs that come with the pen, simulating different types of pens, from hard tip to soft felt type pens for various types of drawing. Given that the pen has 2048 sensitivity levels, it makes sense that a different type of nib would make a difference in how the pen responds to your touch.

The major new feature in the Intuos5 is touch support (Figure 4). The less expensive Bamboo Touch tablets have a limited set of touch functionality in them, but the Intuos5 brings the entire compliment of gesture support to the tablet. I tested with a Mac running Lion, and every OS level gesture, including Mission Control, Desktop swipe, zoom, Luanchpad, etc are supported. I checked with Doug Little at Wacom and confirmed that all gestures on Windows, including the upcoming Windows 8, are fully supported as well. 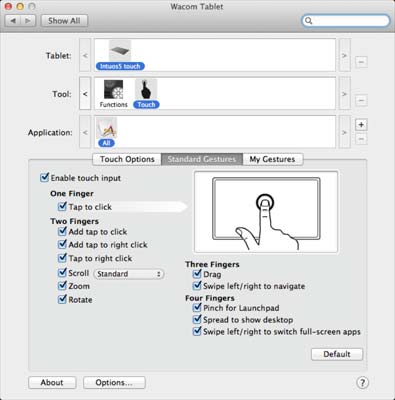 In addition to the standard gestures included with the OS, you can create your own gestures, making this a complete replacement for a trackpad on your system (Figure 5) 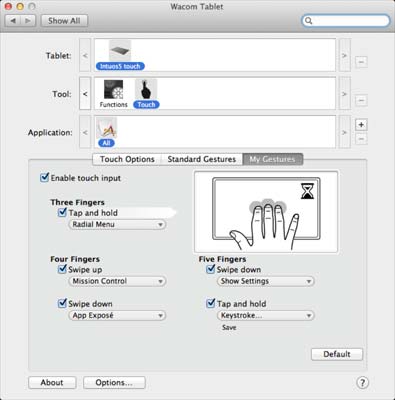 Not everyone is a gesture sort of person though, and Wacom recognizes this, letting you turn touch off with a button press if you like.

As I get older, I find that my memory isn't as good as it used to be (ask my wife!). So, I really appreciate the option to have onscreen help pop up with the touch of a button when needed. This help appears as overlays on the screen wherever I am, so I don't need to leave my current application or task (Figure 6). I can also see just the settings for the current ExpressKeys (Figure 7). 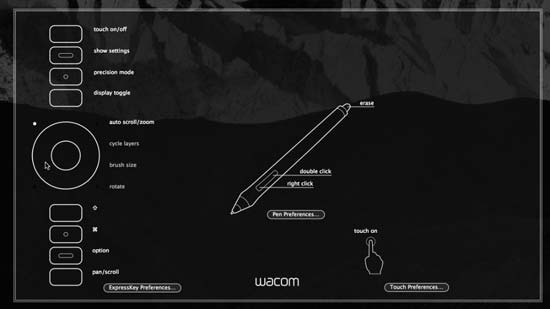 The other change in the Intuos5 is the removal of Bluetooth support in favor of a wireless USB option. This $39 add on plugs into ports on the side of the tablet with a rechargeable battery (about 9 hours on the medium tablet according to the Wacom website), and a small dongle on your computer. I'd prefer the Bluetooth option as it's one less thing to carry around and doesn't use up a valuable USB port on my laptop, but if you need wireless, this is your only option now.

The Wacom Intuos5 line is available in several sizes, from small, with an active area of 6.2”x3.9” up to large with a 12.8”x8” active area. For photography, I find the medium to be the ideal size to work with. This gives me an 8.8”x5.5” active area. Bundled with the Intuos5 are links to download Photoshop Elements 10, Anime Studio Debut, SketchBook Express, Nik Color Efex Pro 4 Select Edition, and a 90 day trial of Corel Painter 12. At $349, the medium Intuos5 is a considerable investment, but they last forever, and you'll find yourself getting more done in less time than you ever thought possible. With the addition of touch functionality, the Wacom Intuos5 tablets are even better value than before, useful at any time you're in front of the computer - not just in graphic editing.