Do you know that sick feeling in the pit of the stomach, that moment when the penny drops and you realise that a once in a lifetime photographic opportunity has been missed? The Decisive Moment has long gone and you missed it. It's a gut wrenching experience; a lifetime of remorse and recrimination is bound to follow because possibly the Best Picture Ever is now just a tantalising memory of what may have been. Why did you miss it? Were you simply not prepared, or was it sheer incompetence? In truth every single one of us is haunted by the memory of the shot that got away. Most often the cause of the loss is down to just not managing to be in the right place at the right time, or maybe simply not responding quickly enough. And then there's the times when we've simply cocked up; wrong lens, wrong exposure, wrong photographer. But being professional means being in the right place at the right time, preparing for all possibilities, responding quickly and never screwing up; the seasoned pro always returns with the goods, right? Well, that may be so, but the reason that veteran is so dependable now is usually because along the road he or she has made every mistake in the book. Get a bunch of pros together over a long liquid lunch and just wait for the stories to emerge. Many such group confessionals have reassured me; I now know I'm not alone in having dropped some truly embarrassing clangers over the course of my career.

It was 26 years ago, but I've only just about managed to get over the trauma of shooting a whole set of bridal portraits with the multiple exposure lever on a borrowed Bronica 645 inadvertently enabled. 16 exposures of the happy couple superimposed on just one frame of colour negative didn't exactly impress the groom and ensured my career as a wedding photographer was brief. The lesson; never shoot with unfamiliar equipment when the chips are down. 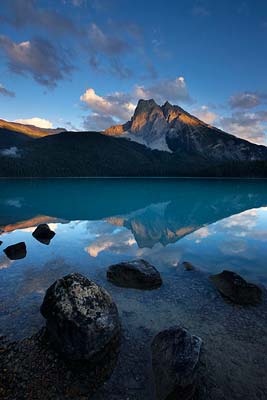 As a photography student in 1984 I managed to wangle access to the private chambers in the House of Commons of Sir David Steel, the then leader of the Liberal Party. It was an incredibly evocative location with light filtering in through the window. I'd taken along a college Hassleblad 500CM loaded with Tri X and took my time metering for the light on his face; I only had a few minutes but didn't want to cock up through haste. Trouble was I did; the best shots were all exposed on the backing paper of the 120 roll film. I'd loaded the film but not wound it on until the dots on the back and body were aligned. The lesson; meticulous preparation always pays off. Check and check again.

A job photographing the lighting in the underground foyer of a London department store seemed straight forward enough. I went along armed with daylight and tungsten balanced film and an impressive selection of colour correction filters. I thought the lights were tungsten; they were in fact fluorescent. Green transparencies meant a red face and reshoot. The lesson; beware of assumptions.

A model was hired to parade up and down Milsom Street in Bath for me as I shot her looking perfect for a commercial property client. I'd hired a 150mm lens for the Hassleblad and was happily shooting away; it all seemed to be coming together nicely. The 120 Fujichrome went off to the E6 and I tapped out the invoice contentedly, until the bike delivered the trannies back from the lab. Mounting horror engulfed me as I slapped each sheet of black unexposed transparencies on the lightbox. Those Hassleblads were the workhorse of many pros of the era, but they were quirky cameras. I'd not worked before with that particular Distagon lens. In this case the lens' flash synchronisation selector was set so the leaf shutter in the lens wasn't being tripped by the release on the camera; handy. Of course the camera wasn't at fault; I was. The lesson; unfamiliar gear had tripped me up again. I should have checked it all over and done a test before the shoot. Preparation prevents piss poor performance. 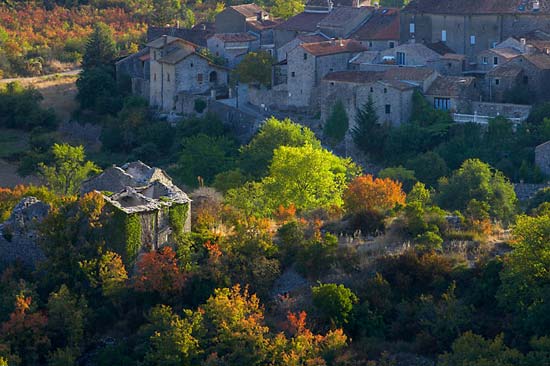 The village of Vissec in the Gorge de la Vis, the Cevennes, Languedoc, France. It's always crucial to return the camera settings to default after every shoot and check again before the next. Canon 1Ds mkIII, 70-200mm lens @ 200mm, 1/4 sec @ f16, ISO 100, polariser

I used to rewind my exposed 35mm film in the camera just until the tail was still sticking out. It was a practise that was a hangover from my student days; the protruding tail made it so much easier to load the film on the developing spirals in the dark. On a job shooting at a language school in Bath I had an assistant along to help with all the lighting and gear. I was getting through the film at quite a rate; I'd rewind in camera, leave the tail hanging out and pass the exposed film to him in return for a fresh roll. There was a cock up of communication and one roll of film ended up going through the camera twice. The lesson; have a fail-safe system for dealing with unexposed and exposed images. It all sounds blindingly obvious, but in the heat of the moment things can and do go quickly wrong.

I could go on, or spill the beans about some of my colleagues cock ups, but no, my fellow pro who drove over his own camera bag shall remain nameless. There have been many more simple cock ups; forgetting to account for a polarising filter when mentally calculating exposures, wrongly positioned filters, recurrent flash synchronisation hassles, flare; there's just so much to go wrong. In my defence I must point out that I only ever made these mistakes once. I'm also happy to say that when compiling this shameful list most of the cock ups date from a long time ago; I duly learnt from my mistakes and evolved a painstaking and meticulous way of working. I had to; using large cumbersome film cameras required a slow thoughtful approach. Generally the larger the format the more there was to go wrong. Focus and depth of field had to be manually calculated, as did the exposure taking into account filtration and bellows extension. The shutter had to be manually cocked, the filters carefully positioned and the film loaded. I took pride in accurately calculating exposures using a separate spot meter, but inevitably if the light was rapidly changing as clouds scudded across the sky there was much wasteful exposure bracketing. It was a world away from the ease and convenience of a modern DSLR.