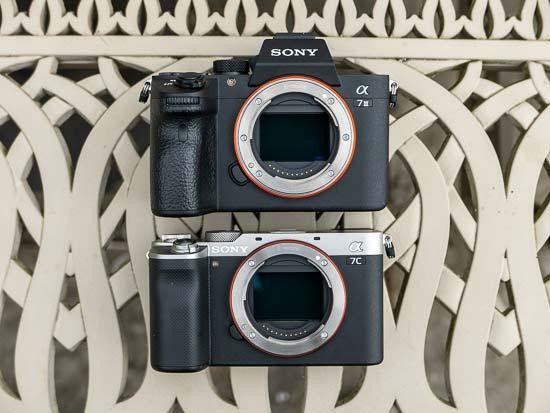 Sony have dominated the world of full-frame mirrorless cameras in recent years, but with Canon, Nikon and Panasonic all somewhat belatedly moving into the market, the competition has never been more fierce, especially as all three of Sony's main rivals have released entry-level models.

Outwardly the Alpha 7C looks a lot like the popular Sony A6000-series of APS-C sensor cameras, and inwardly it seems to share all the core specifications of the A7III full-frame model.

With the street price of the 3-year old Sony A7 III actually being lower than the A7C at launch, why would you choose to buy the new kid on the block? We're bringing you this in-depth Sony A7C vs A7 III comparison to help you choose between the two.

The A7C and the A7 III have exactly the same image sensor.

24 megapixels has become the sweet-spot for most recent entry-level and mid-range mirrorless cameras, with much higher megapixel counts reserved for premium flagship models.

Backside Illuminated (BSI) is a special manufacturing process that should result in better image quality in low-light situations than cameras that have a non-BSI sensor with the same number of megapixels.

It's no surprise to see the Alpha 7C using the same proven sensor from the A7III, and is an excellent foundation for this new model.

There's nothing to choose between the two models here, with both offering native ISO ranges of 100-51,200.

Both cameras can be pushed two stops further to ISO 204,800, and both can drop down to ISO 50 if required.

The A7C and A7 III offer 4K UHD video recording in the XAVC-S format, up to 30fps at 4:2:0 color depth in 8-bit to the inserted memory card or 4:2:2 in 8-bit over HDMI to compatible third party recorders.

It supports the HLG, S-Log3 and S-Log2 profiles.

They can both record Full 1080 HD at up to 120fps, with the dedicated Slow and Quick motion mode offering frame rates ranging from 1fps to 120fps.

Note that when shooting in 4K at 24 and 25p, the camera utilises the full width of the image sensor to oversample from 6K's worth of data, but at 30p, a mild crop is still applied.

The Alpha 7C does have a few new features that set it apart from the A7III.

These include the AF Speed settings from the recently released A7S III, no recording time limits at all, a new blue peaking colour, the ability to shoot vertical videos, live streaming support, and dual NTSC and PAL recording on the same memory card without having to reformat it.

In addition, the one-touch movie button has been relocated from its rather awkward position on the rear-shoulder of the A7III to the top-panel of A7C.

The Sony A7C also supports the new Digital Audio Interface (via MiShoe) to enable use of the new ECM-B1M digital shotgun microphone.

The new Alpha 7C has exactly the same autofocus system with eye and animal detection as the A7 III.

The Sony A7C has one improvement - it uses a new focusing algorithm that's the same as the one used by the recently released A7S III, which is claimed to make the already excellent AF tracking system even more reliable.

Sony mirrorless cameras are well-known for their incredible AF systems, and the new A7C is certainly no exception.

Once again the two models are evenly matched when it comes to continuous shooting speeds.

They both offer 10fps burst shooting with Full AF/AE tracking.

There are a couple of key differences between them though.

Firstly, the Alpha 7C has a slightly larger buffer than the A7III, especially when shooting Raw files, being able to shoot at 10fps for up to 223 JPEGs or 115 compressed RAW images in one high-speed burst.

Secondly, the fastest rate is available with either the mechanical shutter or a completely silent electronic shutter - the A7 III cannot shoot silently at 10fps - which could be the difference between capturing that candid moment or distracting your subject and missing the shot.

Size, weight and styling are the biggest key differences between the A7C and the A7 III.

Whereas the A7III looks like a traditional DSLR with a raised viewfinder in the centre, the new A7C is essentially based on a rangefinder-style A6000-series camera, just slightly bigger and incredibly with a full-frame sensor at its heart rather than a smaller APS-C one.

The EVF on the A7C is positioned in the left-hand corner and it has a more simplified interface with fewer controls.

This does mean that the handling is markedly different to the A7 III, and not in a particularly good way.

The Alpha 7C has a rear control dial, but no front control dial positioned at the top of the hand grip near to the shutter release as on the A7 III, which would enable simultaneous thumb and forefinger adjustment of the exposure settings.

The A7C also only has one Custom button, versus four on the A7 III, which makes it more difficult to set the camera up to your way of working.

There's also no room for an auto-exposure lock (AEL) button, a rather annoying omission, as is the lack of an AF joystick, with the camera instead relying mainly its touchscreen interface for setting the AF point.

Overall, we much prefer the body and handling of the A7 III.

The A7C has a similar 2.36million-dot XGA OLED electronic viewfinder to the one used by both the A6600 and A7 III.

This a fairly good EVF, but certainly not class-leading, that doesn't quite match up to the A6600 and A7 III viewfinders or those of its recent main rivals.

The Alpha 7C has exactly the same 3-inch, 3:2 ratio widescreen LCD monitor as the A6600 and A7 III, which rather disappointingly retains the same 921k resolution.

We'd have expected to see a larger, higher resolution screen, perhaps even 16:9 rather than 3:2, on a new camera released in 2020.

There is one major change, though, that's very welcome.

The A7C's screen has a fully articulating vari-angle design that's been inherited directly from recently released A7S III, which is a big improvement on the A6600's 180-degree flip-up design.

It's simply a much more versatile screen for vlogging, movie shooting and photography in general.

The new Sony A7C only has a single SD UHS-II memory card slot, hidden behind a lockable door on the left-hand side of the camera

The Sony A7 III was clearly ahead of its time by being one of the first mirrorless cameras to have two card slots, although only one of them takes advantage of the faster UHS-II standard.

So the A7III has the edge here by having a second, albeit slower, UHS-I slot.

On the plus side, Sony have at last moved the memory card slot from the battery compartment of all the other A6000-series cameras to its own, more easily accessible lockable compartment on the side of the A7C.

The Sony A7C uses exactly the same large capacity NP-FZ100 battery as the A7 III and the A6600 models.

The kit lens that ships with each camera is one of the biggest differentiators between them.

The Alpha 7C's new kit lens is 10mm shorter, though, and it also has a slightly slower maximum aperture at 28mm.

Perhaps the most controversial aspect of the new Sony A7C is its launch price.

Whilst the A7III has been on the market for a few years and has naturally declined in price, we still think that Sony is being very over-ambitious with the Alpha 7C.

Choosing between the new Sony A7C and the A7 III largely comes down to size and handling, rather than image quality, performance, key specifications or even the price.

The Alpha 7C is undeniably smaller and lighter than the A7III - it's only slightly larger in size than the APS-C sensor A6600 - but it comes at the cost of much less intuitive handling.

Which of those factors is more important to you will ultimately help you to decide between them - do you prefer a smaller, less complex camera or a larger, more customisable one?