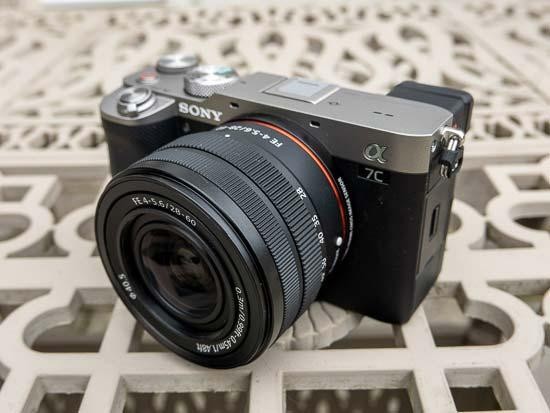 The Sony FE 28-60mm F4-5.6 features a button-free retractable design that is extended simply by rotating the zoom ring.

Optically the lens employs 3 aspherical elements, and it has 7 rounded diaphragm blades.

A linera AF motor provides quick, reliable and quiet auto-focus, and it has a minimum focus distance of 30cm (at 28mm).

Tipping the scales at exactly 167g / 5.9oz, the FE 28-60mm F4-5.6 is the lightest 35mm full-frame zoom lens that Sony produces, and also one of the lightest lenses for the Alpha series of mirrorless cameras.

Coupled with the brand new Sony A7C camera, as seen in the photos below, the lens feels very well-balanced when set to its fully retracted position.

The build quality of the Sony FE 28-60mm F4-5.6 is acceptable rather than great.

The lens feels solid enough in your hand, even though the outer barrel and the 40.5mm filter thread are all made of plastic.

Thankfully the lens mount is made of metal rather than plastic.

On the plus side it boasts a dust and moisture resistant design.

The zoom ring is just about wide enough, ridged and rubberised, whilst the focusing ring is slightly narrower again.

The FE 28-60mm F4-5.6 is the first full-frame retractable lens from Sony, which makes it easier to store and carry than standard lenses.

When unlocked and set to the 28mm position, the lens measures about 7cms.

The internal barrel extends when zoomed out to 28mm, before retracting to its shortest position at 40mm, then extending again when zoomed to 60mm.

If the lens is locked when you turn on the camera, a message is displayed - "Please extend the lens by rotating the zoom ring to take photos or video." (on the A7C camera that we tested the lens with).

The front of the lens does not rotate on focus, which is good news for those who use polarisers or ND grads on a regular basis.

In use, we found the focusing to be very quiet and also very quick when mounted on a Sony A7C body.

With the Sony FE 28-60mm F4-5.6 lens set to its maximum aperture of F4 at 28mm, there is obvious light fall-off in the corners, requiring you to stop down by at least 2 f-stops to prevent it.

There's some barrel distortion evident at 28mm in the RAW files. The Sony A7C automatically and successfully applies corrections to the JPG files. At 60mm there's some pin-cushioning in the RAW files, which is again corrected when shooting JPGs.

The Sony FE 28-60mm F4-5.6 isn't claimed to be a macro lens, offering a minimum focusing distance of 30cm at 28mm and 45cm at 60mm. The following examples demonstrate how close you can get to your subject.

In the FE 28-60mm F4-5.6 lens, Sony have employed an iris diaphragm with seven circular blades, which has resulted in quite appealing bokeh in our view.

We do realise, however, that bokeh evaluation is subjective, so we've included several examples for your perusal.