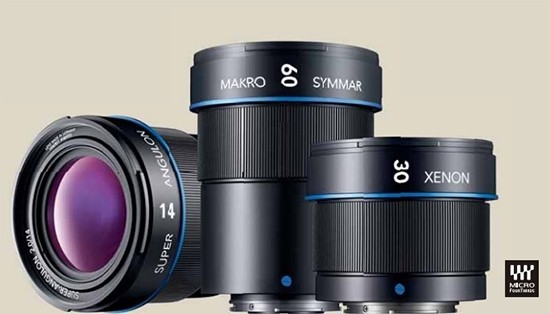 We have collected the most interesting lenses announced at (or just before) Photokina 2012. They are not necessarily the “best” lenses out there—making comparisons across multiple platforms would be quite pointless anyway—but they are all intriguing in one way or another.

Lens manufacturers like Carl Zeiss and Schneider Kreuznach are very active at this year’s Photokina, with both announcing several new lenses for compact system cameras (as well as SLRs). Our top picks also include an interesting compact shift lens, a stabilised telephoto prime for medium-format cameras, a fast ultra-wide lens for digital SLRs with APS-C sensors, and more.

While shift (and tilt) adapters have been around for some time, the €999 B.I.G. 15mm f/4.5 is the first-ever dedicated shift lens for Micro Four Thirds. Weighing in at 200 grams the B.I.G. 15mm f/4.5 lens comprises 8 lens elements in 6 groups and comes with a built-in hood. With a maximum shift of 5.3mm, the lens enables users to avoid keystoning in architectural shots. It does not provide tilt functionality, though.

At this year’s Photokina, Carl Zeiss introduced a new family of autofocus lenses for compact system cameras (CSCs). Initially comprising a 12mm f/2.8, a 32mm f/1.8 and a 50mm f/2.8 macro lens - equivalent to 18mm, 48mm and 75mm respectively -, this new range of Zeiss AF lenses will be available for Sony NEX and Fujifilm X-mount cameras. This is an important development as the X system is still very new and the NEX system, while somewhat more established, is still a bit thin on fast primes. Exact pricing for the Carl Zeiss CSC lenses has yet to be communicated but the company says they will be “around the €1,000 mark” each.
Announcement | Hands-on photos

At the show, Olympus is showing off a prototype M.Zuiko Digital ED 17mm f/1.8 lens. This is an interesting moderate wide-angle lens that features both a distance scale and DoF marks, making it suitable for zone focusing, much like the existing (but considerably wider) 12mm f/2 lens.
Announcement | Hands-on photos

The Samyang 10mm f/2.8 ED AS UMC CS is a rectilinear ultra wide-angle prime lens designed for use with cameras that have APS-C / DX sensors. Giving an equivalent focal length of 15mm (or 16mm in the case of Canon EOS), the Samyang 10mm f/2.8 is a manual-focus lens scheduled to be available by the end of this year.
Announcement | Hands-on photos

Schneider Kreuznach - a German company best known for its large-format lenses - has introduced its first-ever lenses designed for the Micro Four Thirds system. The first lens in the series, the 28mm equivalent Super-Angulon 14mm f/2 wide-angle lens, will be available by the third quarter of 2013. In the fourth quarter, it will be followed by the Xenon 30mm f/1.4 “universal” prime and the Makro-Symmar 60mm f/2.4 macro lens. The company is very active at this year’s Photokina - in addition to the Micro Four Thirds lenses, it introduced a whole new line of interchangeable video optics, an ultra-wide angle lens for Phase One medium-format bodies and four new lenses for SLR cameras.
Announcement | Hands-on photos