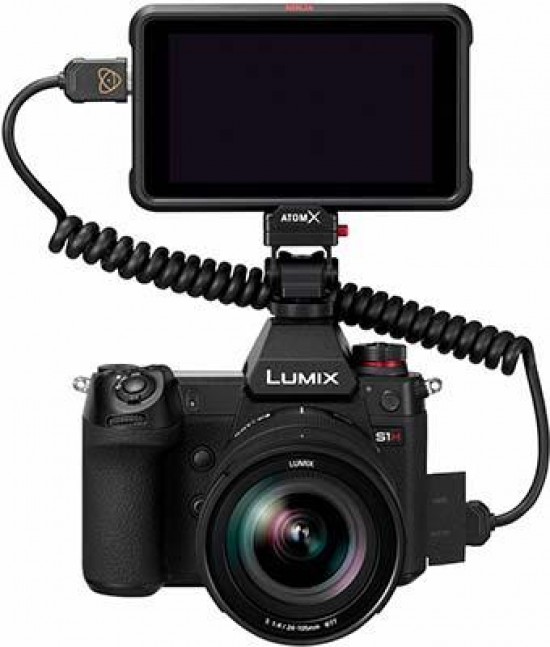 Panasonic and Atomos have collaborated to enable RAW transfer over HDMI from the new LUMIX S1H camera to the Atomos Ninja V Monitor Recorder.

The new Lumix S1H will be shown working with the Atomos Ninja V at the upcoming IBC2019 show in Amsterdam from September 13th.

• Continuation of successful corporation with Atomos

• Live-Preview at IBC2019 in Amsterdam

29th September 2019 – Panasonic proudly announces the continuation of the successful development corporation with Atomos Limited. Together, the companies will realize RAW-data transfer over HDMI from the LUMIX S1H to the Atomos Ninja V Monitor Recorder.

As the world’s first full-frame mirrorless camera capable of 6K internal video*1, the LUMIX S1H combines the quality of professional cinema-grade video cameras with the high portability of mirrorless system cameras. In order to expand the camera’s functions and creating an optimal workflow for filmmakers, Panasonic wants to offer RAW-data output for utmost quality also when recording externally and for this seeks full compatibility to the Atomos Ninja V 4K/60p HDR Monitor Recorder.

“Atomos and Panasonic have a good relationship and we have been providing 4:2:2 10bit 4K HDMI output recording for the LUMIX GH-series. We are now developing RAW output via HDMI with Atomos for the S1H.”

“We are very proud of continuing to develop new ground-breaking technology with a company of the calibre of Panasonic. We are both highly committed to the democratization of filmmaking for creators, and the ability to transmit RAW over HDMI from the S1H to a Ninja V is a major leap forward in this endeavour.”

The new Lumix S1H will be shown working with the Atomos Ninja V at the upcoming IBC2019 show in Amsterdam from September 13th.

More information on the combination will be available during the show.

Panasonic has announced the development of a firmware program for the LUMIX S1H full-frame mirrorless camera which enables the output of maximum 5.9K/29.97p RAW video data to the Atomos Ninja V 4K HDR monitor-recorder over HDMI. The program is scheduled to be launched in early 2020.

Panasonic has established a good partnership with Atomos, a global company that creates video equipment for professional film creators, through the development of digital cameras such as the achievement of 4:2:2 10-bit 4K video output over HDMI in the LUMIX GH Series of cameras.

Working together with Atomos, a new firmware program that enables maximum 5.9K/29.97p as well as C4K*3/59.94p RAW video data over HDMI has been developed. With this firmware program, the Apple ProRes RAW can be recorded on Atomos Ninja V, which is one of Panasonic’s commitments to provide innovative solutions for professional film creation.

The LUMIX S1H prototype installing this firmware program will be exhibited along with the Atomos Ninja V in the Panasonic booth (Booth No. C45, Hall 11) at the IBC2019 (International Broadcasting Convention) to be held in Amsterdam, the Netherlands, through 13-17 September, 2019.

*1 As a full-frame digital interchangeable lens system camera, as of August 27, 2019. Panasonic research.