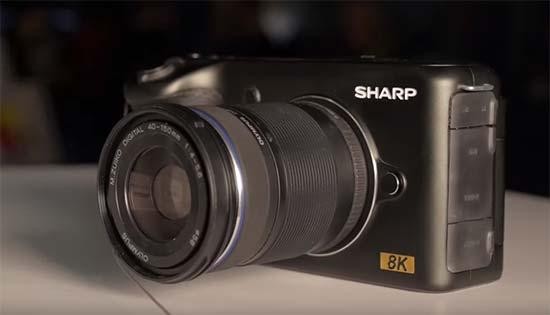 YouTube channel Kinotika spotted the Micro Four Thirds camera on the Sharp stand, which is being displayed as a working prototype at the show.

There aren't too many concrete details available yet, but the upcoming Sharp 8K Video Camera will offer 8K recording at 30p using the H.265 codec from its Micro Four Thirds sensor, have a 5-inch vari-angle LCD screen that's hinged at the side (great for vlogging), and offer in-camera image stabilisation for the wide range of Micro Four Thirds lenses on the market.

The Sharp 8K Video Camera is due to be more officially unveiled at the NAB 2019 show in April, but that hasn't stopped Sharp from announcing a price - under $5000, to be inexact - so expect it to retail for $4999...

The nearest rival for the Sharp 8K Video Camera is the Blackmagic Pocket Cinema Camera 4K, which costs a lot less than $5K, but as the name suggests "only" offers 4K video recording.