The Olympus µ[mju:]-III Wide 100 is an advanced compact camera with a wide 28mm-100mm zoom lens, autofocus system with 11 autofocus-points, 3-way Auto Exposure (AE) system for accurate exposure of images and six different flash modes. With a retail price of £169.99, the Olympus µ[mju:]-III Wide 100 is positioned at the more expensive end of the compact camera market. Do all those features justify that cost? Read on to find out.

The Olympus µ[mju:]-III Wide 100 has a recommended retail price of £169.99. The best UK price that I could find was £149.99 at Foto First Direct. The RRP of £169.99 positions this camera at a point in the marketplace where compact cameras end and the cheapest 35mm SLRs start. 2-megapixel digital compact cameras can also be found in this price-range, so the µ[mju:]-III Wide 100 has quite a lot of competition.

The main selling point of the Olympus µ[mju:]-III Wide 100 is its wide 28mm lens. The 28 -100mm 3.6x wide angle zoom lens is a lot wider than the usual 35mm+ lens that are found on most compact cameras. All of the other Olympus compact cameras with zoom lenses, for example, are 38mm at the wide end of the range. The largest available aperture is f4.6 when the lens is set to 28mm and f11.9 when set to 100mm - respectable enough at the short end, but very slow at the long end.

The Olympus µ[mju:]-III Wide 100 has a Multi-Wide AF system with 11 autofocus-points for precise autofocusing, and a 3-way Auto Exposure (AE) system for accurate exposure of images. As with most compact cameras, these settings are automatic - you can't select a particular focus point, for example. You can, however, choose Spot mode instead of the AE mode, which is useful for tricky lighting conditions, providing you know how to use it correctly.

Film loading, advance and rewind are all automatically handled by the camera, although you can choose to rewind the film before all the frames have been exposed.

The built-in flash unit, which pops up whenever the camera turns on, offers 6 selectable modes - Auto, Red-eye Reduction, Off, Fill-in, Night Scene and Red-eye Reduction Night Scene. The flash takes between 0.5 and 5.5 seconds to recycle before it can be used again, and coverage when using ISO 400 film is up to 9.2m at the wide-angle lens setting and up to 3.6m at the telephoto setting.

Olympus claims that the Olympus µ[mju:]-III Wide 100 has an all-weather construction for care-free use on rainy days. In my view the camera has a plastic construction and I would quickly store it away in a coat pocket if it began to rain.

As with most compact cameras, the Olympus µ[mju:]-III Wide 100 is pretty straight-forward to use, partly because there aren't that many controls on the camera. You slide the lens cover across (a feature used on most Olympus compacts) and the lens zooms out to its widest setting. The bulit-in flash unit also pops-up, even when the flash setting is off, which I personally found a bit annoying. I'd prefer it if the flash unit only appeared when I wanted it to. It also has a rather flimsy feel to its construction, feeling as though it would easily snap off if you caught it on something.

The lens zooms out quite a long way when it is set to the longest focal length of 100mm (see the photographs above in the Design section). The operation of the lens when zooming is pretty noisy, and I definitely wouldn't try any close-range candid street photography with this camera. It takes about 2 seconds to zoom from the widest to longest settings, and the switch used to operate the zoom feels responsive enough. The Olympus designers have positioned this switch next to the shutter button, which meant that I found it difficult to quickly zoom the lens and take a picture, as I used my index finger to either use the zoom or press the shutter. This is fine for photographs of static subjects, but not for those situations where you want to frame the subject by zooming and be ready to capture that fleeting moment.

There is a small LCD panel on the back of the camera which displays the current settings and the battery life. Underneath are three very small buttons that control the flash, self-timer/remote control (an optional accessory) and the exposure mode (spot or AE). There is also a small button which rewinds the film midroll - this is recessed and requires a sharp point like a pencil tip to operate it, which isn't very user friendly on the rare occasions that you will want to use this feature.

Olympus have fitted the µ[mju:]-III Wide 100 with a tripod socket, but unfortunately they've placed it so near to the right-hand side of the camera that it's practically useless. I'm not sure how many of these cameras will ever be mounted on a tripod anyway, so I'd question its inclusion anyway. The final feature of note is the dioptre adjustment knob, an essential feature for spectacle wearers, which is positioned just to the left of the viewfinder. Unfortunately it protrudes further than the viewfinder and you can feel it sometimes against the inside of the bridge of your nose when looking through your right eye.

I used Kodak Royal Supra ISO 200 print film during the Review and had the film processed at The Strand, London branch of Jessops.

As this is a review of the Olympus µ[mju:]-III Wide 100 camera, rather then Kodak Royal Supra film, I'll concentrate on the aspects of image quality that are directly attributable to the camera.

The µ[mju:]-III Wide 100 had a tendency to under-expose slightly, resulting in photographs that looked saturated but which lacked some shadow detail. 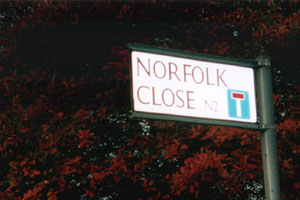 On a few occasions the camera got the exposure absolutely wrong, as shown in Sample 3 on the left. In this image the µ[mju:]-III Wide 100 seems to have exposed for the white sign, resulting in a very bright street sign with a very under-exposed background. The Auto Exposure (AE) system is way off the mark in this example. Furthermore, I can see on the print that there is an unwanted purple haloing effect around the edges of the sign, making it glow - it definitely wasn't glowing when I took the photograph! 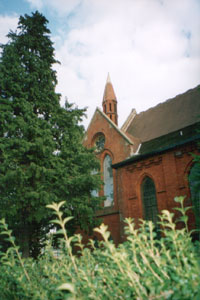 So overall the µ[mju:]-III Wide 100 produced exposures that were a bit hit and miss in the bright, sunny outdoor conditions in which this Review was conducted. It wasn't as consistent as the Olympus IS-500 film camera that I reviewed last week; some exposures were actually more pleasing, but some were disastrous. The lens delivered fairly sharp images with some noticeable barrel or pin-cushion distortion at either end of the 28-120mm zoom range, but nothing too serious. Overall I was just about satisfied with the images that the combination of the IS-500 camera and µ[mju:]-III Wide 100 film delivered, but I'd be worried about trusting the camera's exposure system in the future.

I scanned all of the prints on my Black Widow 4830 Pro flatbed scanner at 72 dpi using the default settings. This initially created a problem - all of the scans were far too dark. To give you a better idea of what the prints actually look like, I used the Levels tool in Photoshop to set the midtones of each print to a setting of 1.50, so that the Input Levels was set to 0 ; 1.50 ; 255. I then cropped them, resized them to 300x200 pixels and saved them for the Web as JPEGs with a Quality setting of 60.

With it's champagne finish, sliding lens cover and extensive specification, the µ[mju:]-III Wide 100 certainly aims to impress. It does feel well-built, which is important for a camera that will spend most of its life in a pocket or slung in a bag. It's certainly not the smallest compact camera in the world, but that is actually a plus point for me, as it sits comfortably in your hand and is quite a tactile, easy-to use camera.

The 28mm lens is definitely the highlight of this camera, allowing you to cram more of the scene into your photographs. Unfortunately it seems to have come at a cost - £169.99 of cost to be exact. The µ[mju:]-III Wide 100 is faced by exactly the same competition as the Olympus IS-500 that I reviewed last week; cheap 35mm SLRs which offer all the benefits of the most popular photographic format, and cheap digicams which offer the thrill of being able to see your photos instantly. I enjoyed using the µ[mju:]-III Wide 100, but I didn't enjoy using it so much that I would pay the high price tag that comes with it. And even that 28mm lens isn't enough to convince me otherwise...