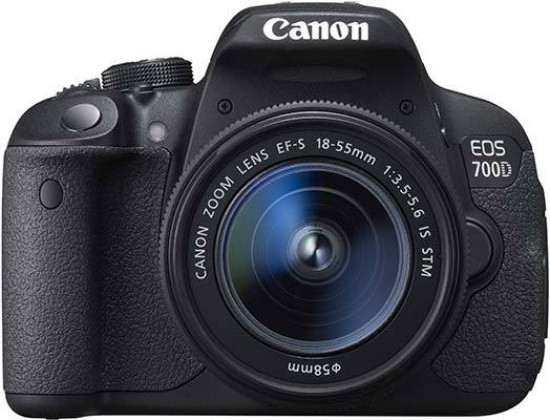 Reviews of the Canon EOS 700D from around the web.

The Canon EOS 700D / Rebel T5i is the company's latest addition to its novice-oriented 'Rebel' series. With more than two decades of continuous success in its film and digital incarnations, these little SLRs have been improved and refined to the point that Canon's biggest challenge seems to be finding new ways to distinguish its updated models. Place the new EOS 700D / Rebel T5i alongside its predecessor the EOS 650D and the differences are so minimal to be of little real importance.
Read the full review »

The Canon EOS 700D maintains the same 18MP resolution we've seen in a number of EOS bodies in recent years, as opposed to rivals such as the Nikon D5200 and Sony Alpha 65 which have opted for 20MP+ sensors. This latest generation chip features a Hybrid AF system that we first saw on the EOS 650D, with the central pixels used for phase detection AF, so when combined with the Canon EOS 700D's contrast detect AF system, is designed to improve focusing performance in both Live View and video modes.
Read the full review »

Canon’s triple-digit DSLR range has long been one of the most popular series of affordable DSLRs. The Canon EOS 700D arrives as a replacement to the EOS 650D, hitting a £650 price tag at launch. It’s also the large, better-featured alternative to the Canon EOS 100D – Canon’s new ‘smallest DSLR in the world’ rival to Compact System Cameras (CSCs). Although it appears that little has changed, the range’s popularity is such that the 700D is sure to gain admirers.
Read the full review »