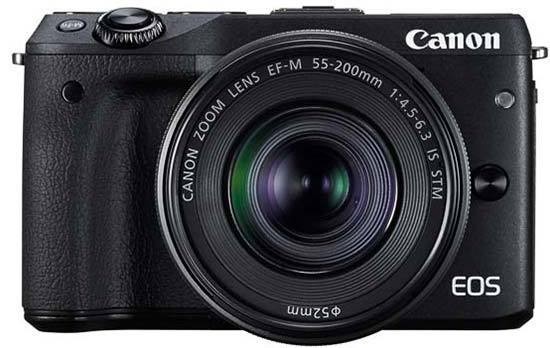 Initial impressions of the new Canon EOS M3 are mostly favourable. Despite being one of the smaller compact system cameras currently on the block, the camera feels reassuringly solid and weighty when held in the palm (measuring 110.9 x 68.0 x 44.4 mm and weighing 366g), particularly so when the metal construction 18-55mm kit zoom is screwed into place via the EF-M mount. For a suggested total spend of a reasonable £599.99 / €799.99 for body and optic (much cheaper than the original EOS M on launch), this lens offers the 35mm equivalent focal range of 28-88mm.

Unlike a DSLR and most CSCs, we did manage to squeeze the EOS M3 with zoom attached into a jacket pocket, despite it not being particularly comfortable to do so. Our black version also had a slightly roughened non-slip feel to its surface subconsciously recalling a pro-grade DSLR. Canon have seen fit to add a proper handgrip to the EOS M3, something that was sorely missing from the original version, making it feel much more like a "proper" camera for enthusiasts.

Of course it’s what’s inside that counts and here the ‘jewel’ is an enthusiast pleasing APS-C sized sensor pumping out 24.2 megapixel images, with the choice of shooting in 14-bit Raw as well as JPEG, or both in combination. Choose any Raw option though and you miss out on the ability to automatically apply digital filter effects in camera - those options are simply de-selected on the EOS M3’s on-screen tool bar. Rival APS-C sensor incorporating CSCs include offerings from Sony, Samsung and Fujifilm.

The LCD on the back of the Canon now tilts, up 180 degrees and down 45 degrees, although it cannot be swiveled to the side. The LCD is three inches in size and boasts a high 1040K dot resolution. Furthermore it’s a touch screen, though you wouldn’t automatically know it from looks alone, as we also get the basic physical controls ranged alongside it. Otherwise the EOS M3 layout is pretty much business as normal for a consumer level compact camera.

The other obvious thing this Canon has going for it is that it is an ‘EOS’. This means in theory that users can utilize any of its manufacturer’s 70+ EF lenses and accessories, the former screwed into place with the aid of an adapter ring, albeit with a resultant ‘front heavy’ appearance. There’s also the fact that said adapter costs an additional £160. Also shared with EOS DSLRs in the Digic 6 processor that makes up the guts of the EOS M3, and the fact that sensor cleaning takes automatically place upon powering down the camera; not something typically witnessed with competing CSCs.

There is now a pop-up flash built into the EOS M3’s body, rather than the 90EX Speedlite that shipped in some EOS M kits. The EOS M3's flash is more convenient, but only has a weak guide number of 5, along with a recycle time of 3 seconds.

From the front then, the EOS M3 more closely resembles a PowerShot camera than an EOS DSLR, rounded corners stopping it looking completely boxy and in fact going one further and imbuing it with a smidgeon of style. The form factor is compact enough that the EF-M lens mount swallows up roughly half of the faceplate, with tiny left and right stereo microphones on either side, a porthole for a self-timer/AF assist lamp located top right, and beneath that a springy and obvious lens release button.

Left of the lens is located the new chunky handgrip. Comfortably, the shutter release button, which is encircled by a control dial, is positioned both forward of the top plate and on a section that dips down and slopes slightly forward. When holding the camera in the right hand your forefinger therefore automatically slips onto these ergonomic controls. So, once the camera is powered up, your fingers are suitably positioned to immediately fire off the first shot. Alongside is the new M-Fn button, which can be usefully assigned to one of 15 different functions.

Canon have greatly expanded the options on the top-mounted shooting mode dial with 11 settings in total, no longer hiding the main PASM options away. ‘Scene Intelligent Auto’ is still the camera’s default setting which, as it sounds, is pretty much point-and-shoot all the way, the EOS M3 recognizing common scenes and subjects – which it does consistently and reliably – and optimizing the results for you. Hybrid Auto, Creative Assist, Scene modes, and a range of creative Effects round off the options for beginners.

The program, shutter priority, aperture priority and manual options are also now featured on the shooting mode dial, another nod to the EOS M3's attempt to appeal to more experienced photographers. There's even a new Custom option so that you can save and quickly recall your favourite camera settings. The EOS M3 also now has a new dial on top for adjusting exposure, the options running +/- 3EV.

A press of the actual ‘Q.Set’ button on the backplate, or the small ‘Q icon top right of screen in the above modes, and we’re also presented with a range of ‘Picture Style’ settings familiar from Canon DSLRs, for in-camera adjustment of shots pre-capture. The ‘Picture Style’ selection comprises Auto, Standard, Portrait, Landscape, Neutral, Faithful, Monochrome, plus three further user definable settings. Sharpness, contrast, saturation and colour tone can be individually adjusted for each. White balance and metering modes can further be manually selected if the user has chosen one of the P,A,S,M modes. Metering options comprise evaluative metering, partial metering, spot metering, and centre weighted average.

As one might expect, there are several video quality selections to choose from, running the gamut from the Full HD 1920x1080 pixels at a maximum 30 frames per second, stepping down to the industry standard 25fps and 24fps as our next options, and then on to 1280x720 pixels at a cinematic 50fps as a further choice. The lowest resolution video option is a bog-standard 640x480 pixels, though again at 25fps.

A press of the top plate on/off button, which is recessed level with the bodywork, powers the camera up for action in around two seconds. Squeeze the shutter release button and the EOS M3 now focuses in under 1/2 second, much quicker than the original EOS M. Whether you’re shooting a highest resolution JPEG or JPEG and Raw in combination, there’s barely a noticeable difference in the time it takes to commit either to removable media – here an SD card of every description, sharing a compartment with the rechargeable lithium ion battery at the base.

With the vacant flash hotshoe and embedded mono speaker rounding off the top plate features, the rest of the controls on the backplate of the EOS M3 likewise look familiar – or will do so to anyone used to a digital snapshot camera of any description.

A subtly curved thumb pad sits top right of the rear panel, whilst small video record and playback buttons rest to the right of it. The action of these is commendably stiff, so avoiding inadvertent recording or playback when you’re merely in the process of attempting to establish a firm hold of the EOS M3.

Directly beneath are AEL and Focus Area buttons, both very welcome additions that once again are designed to appeal to more experienced users. Sitting beneath we have the multi-directional control dial and surrounding scroll wheel we’ve already touched upon. Ranged around this are ISO speed, Flash, Delete and Manual Focus options. At the very centre is the ‘Q.Set’ button for implementing the various changes applied throughout the course of handling the camera, and exploring the options offered within, again as previously described above.

The EOS M3's wi-fi capabilities allow you to share images during playback via the Up button on the navigation pad. Simply enter a nickname for the camera and five more icons then appear, connecting the EOS M3 to another camera, a smartphone, a computer, a printer and the Internet respectively. Setup is relatively straight-forward for each scenario, although you'll need a basic understanding of the protocols involved. Note that you need to install the dedicated and free Canon CameraWindow app to connect the EOS M3 to an iOS or Android device.

The EOS M3's wi-fi functionality is employed to tag your images with GPS data recorded by your smartphone ( latitude, longitude, altitude and shooting time) via the Canon CameraWindow app, which effectively replaces a more conventional built-in GPS system. We actually prefer having GPS built-in to the camera rather than having to sync it with an additional device, so in this regard the EOS M3 doesn't compare well with rivals that offer this feature, although it does side-step the issue of negatively affecting battery life. The EOS M3 also features NFC (Near Field Communication) technology (the same technology that's used for mobile payments), which allows you to connect it to a compatible Internet enabled device or another NFC-enabled camera by simply tapping them together.

The Info button toggles through the various display modes on the LCD screen, including a useful control panel that, as the camera is touch-sensitive, makes it easy to quickly change the key settings. The Menu button calls up the sort of screen selection and near enough the exact same layout that, unsurprisingly, one would nowadays see on a consumer level DSLR such as the 750/760D, with a series of folders covering both basic camera operation and set up; a lot of the camera options obviously doubling up on the on-screen icons and options presented when in the various shooting modes, as we’ve previously described.

With lugs for attaching a camera strap provided either side of the EOS M3, on the left hand flank – if viewing the camera from the back as the user will be doing when engaged in operation – we find not only the expected AV/USB output, but also one for supplementary microphone. Joining them is a new switch for popping-up the built-in flash, and a logo denoting the camera's NF connectivity. On the right flank is the HDMI port.

The base of the camera meanwhile features a screw thread located directly behind the lens mount for the attachment of a tripod, and, over to one edge we naturally get the compartment for media card and battery. Unlike an increasing number of compact system cameras, we do actually get a standalone mains charger with the EOS M3, so the battery can be removed and charged independently of the body. Which means that if you do sensibly invest in a spare, the camera isn’t tied up each time you need to re-charge.