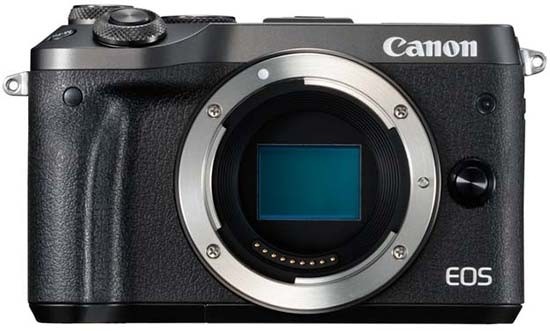 Canon continues to develop its EOS M range of compact system cameras (CSC) through the EOS M6, a diminutive camera packed with the sort of features one would expect from a Canon DSLR.

Aimed at enthusiast photographers, the EOS M6 replaces the two-year-old EOS M3 and is similar to the EOS M5, save for the exclusion of a built-in electronic viewfinder (EVF). Without a built-in EVF, the EOS M6 is significantly cheaper than the EOS M5 (and smaller), though there is an optional EVF available.

New camera systems take time to mature - we’ve seen it again and again that a camera might take several versions before realising its potential. Relatively speaking, the Canon EOS M range is the new kid on the compact system camera block (coming a good 5 years after Olympus), but the range has been present for 5 years now, which should have provided enough time to come into its own.

In the hand, first impressions are good. The Canon EOS M6 is compact yet solid and reassuringly weighty, while the faux-leather finish feels more luxurious than the smooth plastic body of its predecessor.

The physical distance required between the APS-C sensor and lens mount (known as flange depth) in turn makes for a relatively deep camera when compared to Micro Four Thirds cameras, but in every other dimension the EOS M6 is truly dinky.

A further note on size - usually one would expect disproportionately large and heavy lenses with a compact system camera that features an APS-C sensor, like the EOS M6. Yet Canon’s EF-M lenses are comparable to micro four thirds lenses (M4T), which are part of a significantly smaller image sensor format. Impressive stuff.

All three EF-M lenses used during this test are well balanced with the camera, even the 18-150mm f/3.5-6.3 lens. The 22mm f/2 lens is particular tiny, which definitely brought a nod of approval from me when first attaching it to the camera.

For a compact system camera such as the Canon EOS M6, it makes perfect sense to exclude a viewfinder yet offer an optional external unit. That way, the camera body design is more compact (without the optional viewfinder attached) and it takes up less space in a bag too.

Those that want the optional EVF unit have a choice between the EVF-DC1 or DC2. When the cost of a viewfinder is factored in, the price of the EOS M6 is comparable to the EOS M5, which is a tad on the expensive side.

I did not have the viewfinder for this test so instead relied upon the rear LCD screen, which is a touch-sensitive, 3in, 1.04-million-dot unit. Given the diminutive size of the Canon EOS M6, it surprised me to naturally desire a viewfinder when using the camera, but that is not to suggest the LCD touchscreen is lacking.

For a significant part of the test I was shooting in bright sunshine. In such conditions, the default setting of the LCD touchscreen is not quite bright enough to see clearly, but once the brightness was manually cranked up to its brightest setting, visibility is fine.

The touchscreen tilts which is of course useful for viewing from low and high angles. Combine that with the touch focus and touch shutter functionality, the screen becomes a truly integral part of operating the camera. For selfie-shooters the screen flips 180° and is viewed above the camera. I took one or two pictures in this mode, for the sake of the test and nothing else, honestly!

Those likely to use both an optional external flash and viewfinder will have to choose between one of the two, because both require the same hotshoe port.

Focusing wise, the autofocus of the Canon EOS M6 is snappy without quite matching the best cameras at this price point. Adjust focus between a subject in the foreground and the background and one can see the focus transition - so it’s not lightning fast. There is a bit of hunting in particularly low contrast light, which is to be expected.

For more static subjects, the autofocus on the EOS M6 works well, but those interested in fast moving subjects may find a few missed shots. Autofocusing for video is on the whole very smooth.

I was particularly keen to use the 22mm f/2 (35mm effective) lens because I like to take a lot of street and reportage photos and that is my go to focal length. With the lens attached, the EOS M6 looks like it could accommodate street photographers, but does its handling cut it as a serious alternative to cameras such as the Fuji-X100 series?

Well, start up time is not quite as immediate as I would like and unfortunately there is no option for a silent electronic shutter. Shutter noise is rather obvious, so it’s hard to shoot quietly. For me that is not a problem because I like to interact with subjects, but it may be a sticking point for others.

I found the touchscreen to be helpful for street photography. Not only does touch focus and touch shutter improve your chances of getting a sharp shot, but the tilt function of the screen enables a modern recreation of the waist-level finder, shooting from the hip method, which can be less intrusive to a passersby. So all in all, the camera isn’t quite geared for street photos, but is definitely workable!

Canon has truly been able to squeeze a lot of controls onto the small body, which includes two top control dials and a dedicated exposure compensation dial, which is stacked onto the rear top dial located near your thumb when holding the camera. Easy access to exposure compensation pleased me and will be sure to for other enthusiast photographers.

If like me you like to shoot in aperture or shutter speed priority mode, then the rear top dial is by default set to control ISO. It takes but a small knock to move the dial, from auto ISO to ISO 25,600, which is quite frustrating - I had several overexposed shots taken in bright daylight at ISO 25,600. Ultimately, the rear top dial is too easily rotated.

To avoid the rear top dial ISO problem, the default can be disabled through the custom settings menu. Canon might consider upping the resistance of the rear dial or disabling the possibility of skipping from the lower to upper ends of the ISO range.

That said, having exposure control, exposure compensation and ISO control all immediately to hand is brilliant. There is also exposure lock (AEL) and focus point navigator buttons. Furthermore, on the rear control wheel, there is a manual focus (MF) button, so its really easy to flick between auto and manual focus.

For easy manual focusing, the Canon EOS M6 offers magnification and focus peaking. Focus peaking colours the edges of the areas that are in focus. I found it useful to manually select the M-Fn button on the top of the camera to disable/ activate focus peaking. However, I could not find a way of displaying a focusing distance scale, which is disappointing.

In playback, it is possible to display the focus areas selected for a picture, as well as highlighting overexposure areas - both are helpful for quick image reviews.

I cannot test a compact system camera without commenting on the battery life, because this is typically a weak area for this type of camera. The LP-E17 battery (as used in the EOS M3, 750D and 760D) actually has a respectable 295-shot life. However, in Eco mode the battery shot life is quoted at 425-shots and I found limited affect on operation using this mode. Depending on the day’s shooting, it is still worth taking a second battery. The battery/memory card door is a bit sticky and I’d speculate how durable it is.

As for the Wi-Fi function, it works well when used with an iOS phone - pairing is quick and providing you’re in range then the shooting response is good too. I had the camera with me for a trip away where these was no computer access and found transferring images to my phone for quick editing and sharing really useful.

With both auto and manual shooting modes, plus a plethora of camera controls, I can really see the EOS M6 satisfying a wide range of users.

If an enthusiast photographer takes the time to explore what is possible with the camera controls (yes read the manual!), manually setting up for one’s own shooting styles, then the Canon EOS M6 is truly a delight to use. While not perfect, the EOS M6 delivers where it really counts.