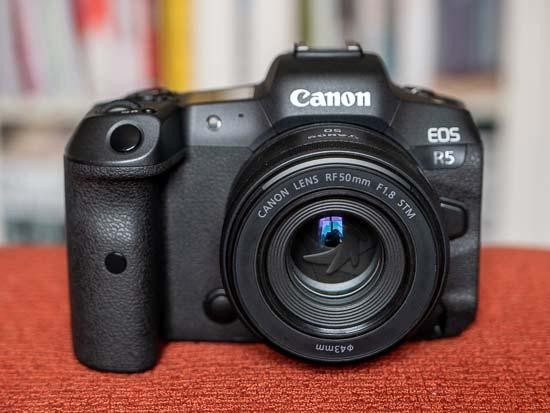 It features a fixed focal length of 50mm, bright f/1.8 maximum aperture, a Super Spectra coating on the lens elements to minimize ghosting and flare, and a rounded seven-blade aperture.

Canon's proprietary STM stepping motor provides smooth, precise and quiet continuous AF while capturing both stills and video, and it has a short minimum focusing distance of 0.30m and a maximum magnification of 0.25x.

As with all other RF-mount lenses, the RF 50mm has a configurable Lens Control Ring on its barrel which can be used to change certain key camera settings.

In fact, it's identical in size and weight to the EF-mount DSLR version that we reviewed five years ago.

It feels well-balanced on a full-frame camera like the EOS R5 that we tested it with, providing what is considered by most photographers to be a "normal" field of view.

As you would expect from such an inexpensive lens, build quality is good rather than outstanding.

The Canon RF 50mm F1.8 STM feels solid enough in your hand, though, despite the all-plastic construction, with the metal mount adding to the solidity.

The focusing ring is very narrow but at least has a knurled, rubberised grip band that assists with the finger-tip operation.

The only other control on the lens barrel is the shared Focus / Control switch.

Setting this switch to Focus allows you to rather clunkily switch between AF/MF focusing via the camera's main menu.

This lens does offer full-time manual focusing, but it's a somewhat convoluted affair.

You have to enable electronic manual focusing (with or without magnification) for the Lens Electronic MF setting in the camera menu, set the camera to One Shot drive mode, and then half-press the shutter release button whilst turning the manual focus ring for it to be active.

Setting the switch to Control allows the manual focusing ring to be used to control certain key camera settings such as aperture, ISO, and exposure compensation.

It effectively turning it into the Lens Control Ring that has featured on previous RF lenses as a third, dedicated control.

Manual focusing is of the electronically-driven, 'focus-by-wire' type, which is typically found on mirrorless camera lenses.

There are no hard stops at either ends of the range, making it more difficult to set focus at infinity.

Polariser users should be pleased that the 43mm filter thread doesn't rotate on focus.

When it comes to auto-focusing, the Canon RF 50mm F1.8 STM zoom is a fairly quick performer.

It takes about 0.2 seconds to lock onto the subject when mounted on the Canon EOS R5 that we tested it with.

We didn't experience too much "hunting" though, either in good or bad light, with the lens accurately focusing almost all of the time.

It's also a quiet performer during auto-focusing, thanks to the built-in STM (Stepping Motor), which makes this lens well-suited to video recording - it's actually quieter for video than when taking stills.

Manual focusing is a different matter, with the lens emitting an audible whine that gets louder the faster that you move the focusing ring.

The lens doesn't ship with either a lens hood or a protective bag. It accepts 43mm screw-on filters.

The 50mm focal length provides an angle of view of 40°.

Chromatic aberrations, typically seen as purple or blue fringes along contrasty edges, are apparent in high-contrast images but is generally well controlled with this lens - the examples below show the worst-case scenario.

As we’d expect from a lens with a wide f/1.8 aperture, there is some noticeable vignetting when you shoot a subject like a white wall wide-open.

That said, it's not particularly extreme and is far less noticeable when photographing “normal” subjects. The effect is lessened when shooting at f/4 and has all but vanished by f/5.6.

With a standard length of 50mm, we wouldn’t expect this lens to have too many problems with distortion.

Our sample images indicate that to be the case, with very little noticeable barrel or pincushion distortion visible.

The Canon RF 50mm F1.8 STM is capable of producing quite nice sunstars when stopped-down to f/22.

The lens is very susceptible to flare when shooting directly into the sun, though, which is exacerbated by there being no lens hood supplied in the box.

The Canon RF 50mm F1.8 STM is not really a macro lens, but the close-focus point is a useful 30cm from the film/sensor plane, and Canon quotes a maximum reproduction ratio of 0.25x for the lens, both of which are slightly better than the EF version.

One of the reasons to buy a fast lens is to be able to isolate the subject from the background, and the Canon RF 50mm F1.8 STM has an iris diaphragm with 7 rounded blades for a pleasing rendering of the out-of-focus highlights.

Below you'll find some examples, but you are also encouraged to check out our sample images.

In order to show you how sharp the Canon RF 50mm F1.8 STM lens is, we are providing 100% crops on the following page.