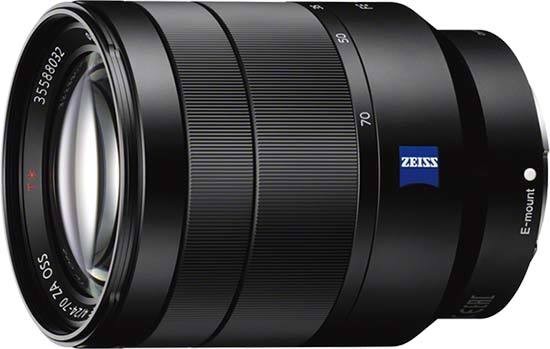 The Carl Zeiss Vario Tessar T* FE 24-70mm F4 ZA OSS is a good premium standard zoom lens for Sony A7/A7/A7S owners, but it's not quite the stellar performer that we expected given its high price-tag, large size and f/4 maximum aperture.

Mounted on the Sony A7, the Carl Zeiss Vario Tessar T* FE 24-70mm F4 ZA OSS is actually taller and heavier than the actual camera, although in use it doesn't feel too unwieldy. Build quality is up to Zeiss's usual impeccable standards, with the weather-proofing and built-in image stabilisation going some way to justifying the cost. It also offers fairly fast and reliable auto-focusing on the A7 camera that we tested it with, along with intuitive "by-wire" manual focusing.

Image quality is excellent at the 35mm and 50mm focal lengths, but you need to stop down to f/8 at 24mm and 70mm to get acceptable edge sharpness. The full-frame sensor makes it easy to throw the background out of focus despite the slow-ish f/4 maximum aperture, although the bokeh effects aren't as smooth as we would have liked from such a premium lens. Vignetting, chromatic aberrations and distortion are all well-controlled.

In summery, while the Carl Zeiss Vario Tessar T* FE 24-70mm F4 ZA OSS is a definite step-up from the Sony FE 28-70mm F3.5-5.6 OSS lens, it isn't quite the quantum leap that we expected. If you really want a standard zoom for your A7/A7/A7S camera, this is still the one to go for, but the combination of the 35mm and 55mm primes lenses is a better option from both an image quality and price point of view, if you can live with the reduced focal range.