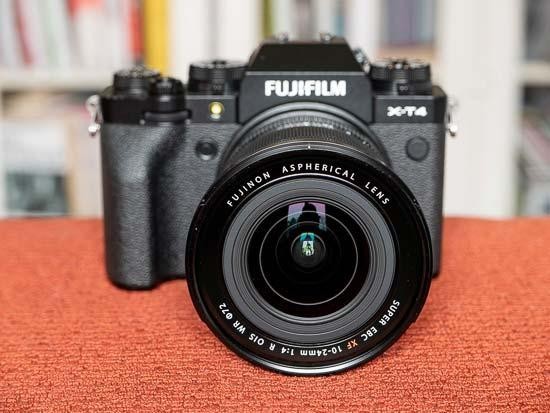 The 2021 version effectively replaces the original Fujifilm XF 10-24mm F4 R OIS lens that we reviewed back in 2014.

Fuji have made several key improvements to this new update, including an enhanced gyro sensor that provides more effective optical image stabilisation (OIS), which has been improved by a full f-stop from 2.5 stops to 3.5 stops when mounted on an un-stabilized X-series camera body.

In addition, it provides up to a whopping 6.5 stops of compensation when used with a camera that also has in-body stabilization, like the Fuji X-T4 that we tested the lens with.

Other new features on the Fujifilm XF 10-24mm F4 R OIS WR include slimmer zoom and focus rings, resulting in an overall weight saving of 25g, a revised aperture dial complete with markings, a more positive action and a lock button, and as the extra WR acronym on the end of its name suggests, Weather Resistance.

While the first version didn't have any level of weather-sealing, which for some owners was quite a serious drawback for a lens that would spend a lot of its life being used outside, the new WR edition is weather-resistant from both dust and moisture and will operate fully in temperatures as low as -10 degrees Celsius / 14°F.

The optical formula is exactly the same as the original 2014 lens, being comprised of 14 lens elements arranged in 10 groups, including 4 aspherical and 4 extra-low-dispersion elements.

The Fujifilm XF 10-24mm F4 R OIS WR is a relatively compact ultra-wide zoom, especially when compared to the other similar lens in the X-series line-up, the XF 8-16mm F2.8 R LM WR.

As you can see in the product pictures, it complements the latest Fujifilm X-T4 flagship camera very well. It doesn't feel at all front-heavy and more than matches the body in terms of its build quality.

The 2021 version of the XF 10-24mm lens has a new weather-resistant structure, denoted by the addition of the WR acronym to the end of the product name.

It is resistant to both dust and moisture and can be used in freezing temperatures as low as -10 degrees Celsius (14°F), greatly enhancing its versatility for landscape and cityscape photographers.

Despite the addition of this weather-sealing, the XF 10-24mm F4 R OIS WR still manages to weigh 25g less than its predecessor.

This is because the focus ring is a little narrower than on the original version by 3mm, smooth in action without being too loose, and has a ridged, rubberised grip band.

There are still no “hard stops” at either end of the 24cm-infinity focus range, though, making it more difficult to set focus at those two extremes.

The zoom ring is also slightly slimmer than on the previous version, by 2mm, again contributing to the 25g weight saving.

The Fuji 10-24mm WR lens has a traditional aperture ring on the lens barrel, which allows you to set the aperture in 1/3 steps.

Fujifilm obviously paid attention to one of of our main criticisms of the original 10-24mm zoom, which rather unintuitively didn't have the actual aperture markings on the lens barrel, instead only showing the selected aperture value in the viewfinder or on the LCD screen.

While the latter way of seeing the aperture is still valid, for the new XF 10-24mm F4 R OIS WR version, Fuji have made the much more sensible decision to also add the actual aperture markings to the lens barrel, bringing it in line with most of the other X-series lenses that have a physical aperture ring.

The aperture ring is nicely damped and makes a distinctive click as you change the setting, and it's no longer quite so easily moved when stored in a pocket or bag, which was another one of our dislikes of the outgoing version.

New to the XF 10-24mm F4 R OIS WR is a lock button for the auto aperture setting, found on the underside of the lens barrel, which prevents the aperture dial from being inadvertently changed from the A setting, if you happen to prefer using the camera body to set the aperture rather than the physical ring.

So the addition of the aperture markings, a slightly more resistant action, and the new lock button all combine to make the aperture ring a lot easier to use than on the original XF 10-24mm lens.

Fujifilm have implemented a brand new, more sophisticated gyro sensor in this lens, which increases the effectiveness of the image stabilisation system by one stop from 2.5 to 3.5 stops on Fujifilm cameras that don't have in-body stabilization (which is most of them).

If you pair the XF 10-24mm F4 R OIS WR with one of the few Fuji cameras that does have in-body IS, like the X-T4 that we tested the lens with, then the amount of stabilization available almost doubles to 6.5 stops of 5-axis image stabilisation.

Whilst most owners of this lens will probably still mount it on a tripod for ultimate stability most of the time, being able to hand-hold the X-T4 and this new lens and get up to 6.5 stops of stabilization makes it possible to still get sharp results in dimly-lit indoor environments without having to crank up the ISO speed.

The Fujifilm XF 10-24mm F4 R OIS WR lens has an internal focusing (IF) system with a very quiet stepping motor. In practice, we found the auto-focus to be fast and accurate on the latest X-T4 camera.

In terms of accessories, the lens ships with a plastic petal shaped hood and a soft cloth wrap.

The hood twists into place through 45 degrees, although the one on our review sample seemed a little imprecise and loose when in the locked position.

We wish Fujifilm had improved the existing hood by adding an actual lock button, but they've decided to continue using the previous version.

Chromatic aberrations, typically seen as purple or blue fringes along contrasty edges, are not a problem with the Fujifilm XF 10-24mm F4 R OIS WR lens.

With the lens set to its maximum aperture of f/4, there is some obvious light fall-off in the corners, requiring you to stop down by at least 3 f-stops to completely prevent it.

The Fujifilm XF 10-24mm F4 R OIS WR is capable of producing quite nice sunstars when stopped-down to f/16.

The lens is slightly susceptible to flare when shooting directly into the sun, though, even with the supplied lens hood fitted, but it's mostly well-controlled.

The Fujifilm XF 10-24mm F4 R OIS WR is not a macro lens, but you can at least focus quite closely, which helps to include some foreground interest. The close-focus point is at 24cm from the sensor plane and the maximum magnification is 0.16x when the lens is set to 24mm.

The Fujifilm XF 10-24mm F4 R OIS WR has an iris diaphragm with 7 rounded blades, which has resulted in fairly appealing bokeh for what is after all an ultra-wide-angle lens.