The Fujifilm XF 16mm F1.4 R WR is a fast wide-angle prime lens in Fujifilm's XF line-up. The weather-proof 16mm F1.4 lens boasts an angle-of-view similar to that of a 24mm lens in a 35mm system, making it suitable for street photography, landscapes and reportage. Other highlights include an iris diaphragm with nine rounded blades, an optical formula that comprises 13 lens elements in 11 groups, including two ED and two aspherical elements, a built-in high-torque DC coreless motor which delivers ultra-fast AF performance, HT-EBC and Nano GI coatings to reduce reflections, a camera-to-subject distance indicator and a depth-of-field scale on the lens barrel, a minimum working distance of 15cm, and aperture and focusing rings. The Fujifilm XF 16mm F1.4 R WR lens is available in black for £729.99 / $999.95 in the UK and the US, respectively. A premium-quality metal lens hood (LH-X16, optional) will be released in September.

The Fujifilm XF 16mm F1.4 R WR is a relatively compact prime lens, at least when compared to its DSLR equivalents, but it's still quite a bit bigger than a comparable Micro Four Thirds lens, weighing 375g and measuring 73mm in length. As you can see in the pictures below, it complements the top-of-the-range Fujifilm X-T1 very well, not feeling at all front-heavy and more than matching the body in terms of its build quality. 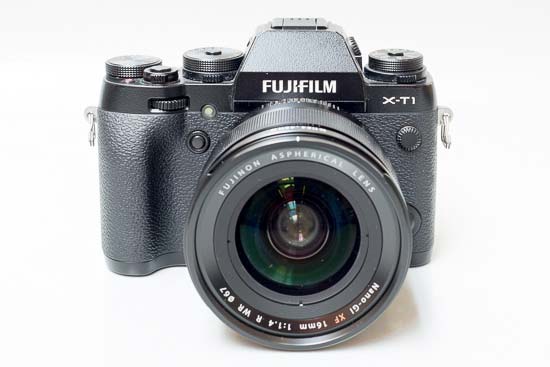 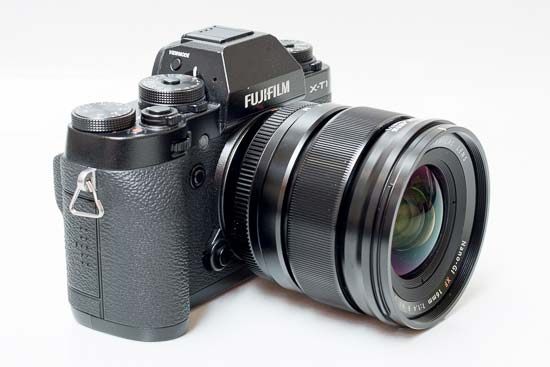 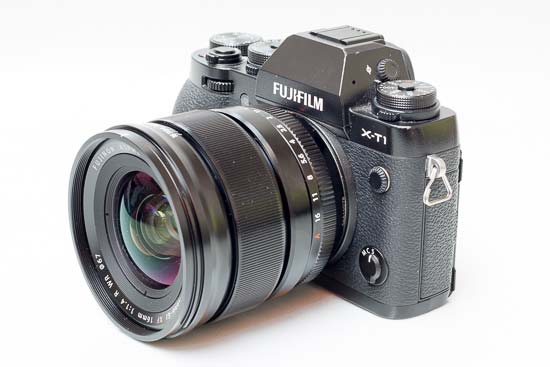 The Fujifilm XF 16mm F1.4 R WR lens boasts a metal mount, high-grade plastic barrel and non-rotating 67mm filter thread. The focus ring is generously wide, smooth in action without being loose, and has a ridged, rubberised grip band. There are “hard stops” at either end of the 15cm-infinity focus range. 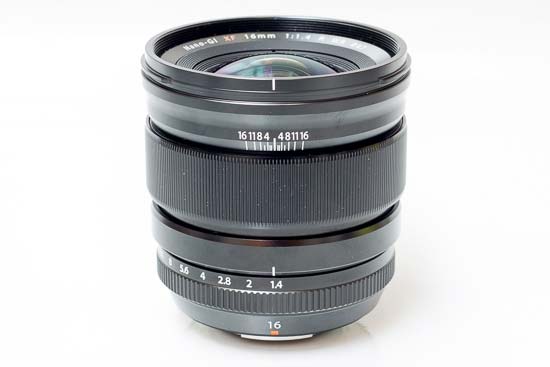 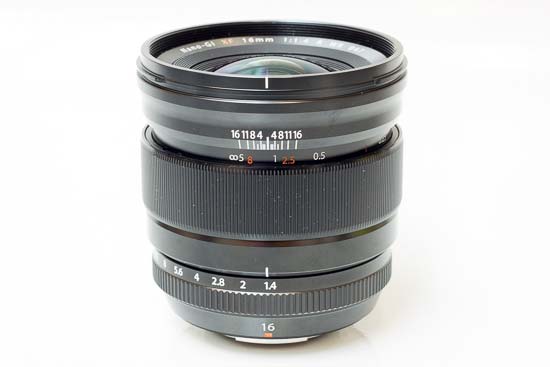 The Fujifilm XF 16mm F1.4 R WR is the fourth weatherproof XF lens to be released so far (the first weatherproof prime), featuring a dust-proof and waterproof structure with weather resistant sealing applied via 9 seals in 8 areas of the lens, making it a perfect partner for the weatherproof X-T1 camera. 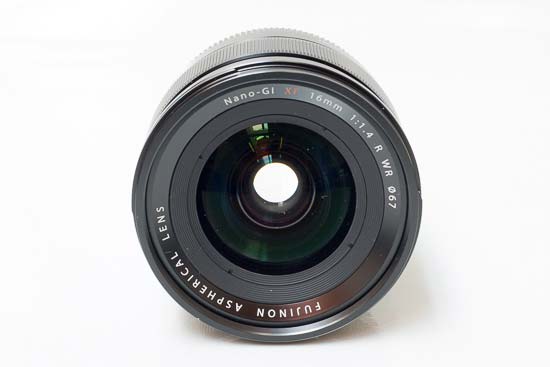 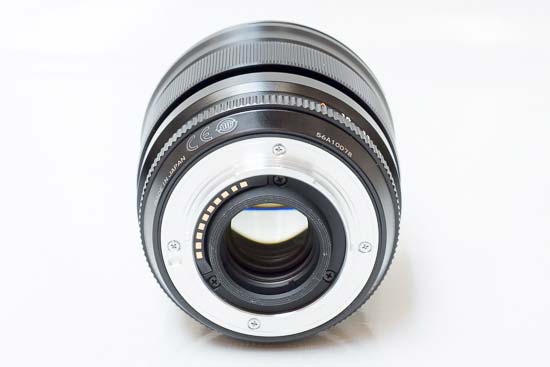 The Fujifilm XF 16mm F1.4 R WR lens features both distance and depth of field scales on the barrel, making it suitable for manually pre-focusing if you find that the autofocus system is slowing you down. The Fujifilm XF 16mm F1.4 R WR has a manual focus collar. When the focusing ring is pushed forward, the lens is locked into autofocus mode. When the focusing ring is pulled back, the focusing distance scale with depth-of-field markings is revealed and you can manually focus with the lens - very neat. 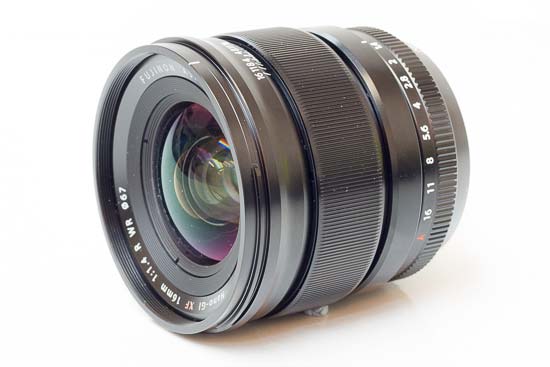 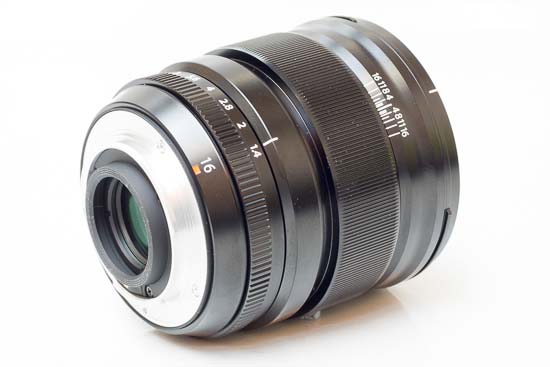 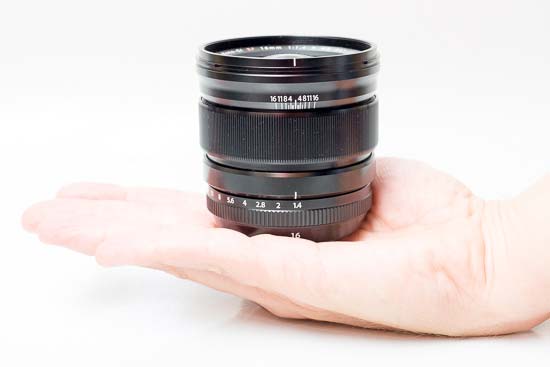 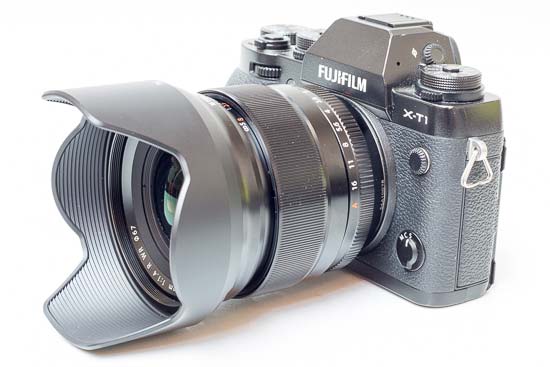 In terms of accessories, the lens ships with a large plastic petal shaped hood and the usual Fujifilm soft lens bag. 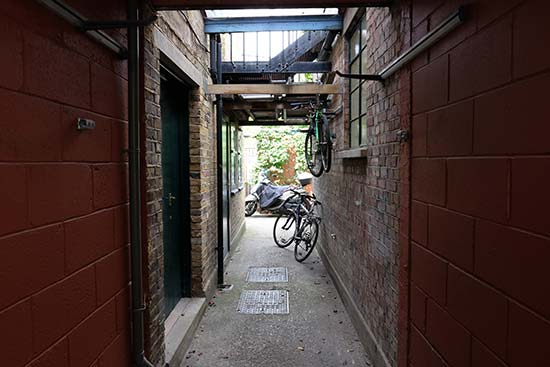 The Fujifilm XF 16mm F1.4 exhibits slight barrel distortion, as you can see in the photo below, and vignetting is very well-controlled even wide-open at f/1.4. 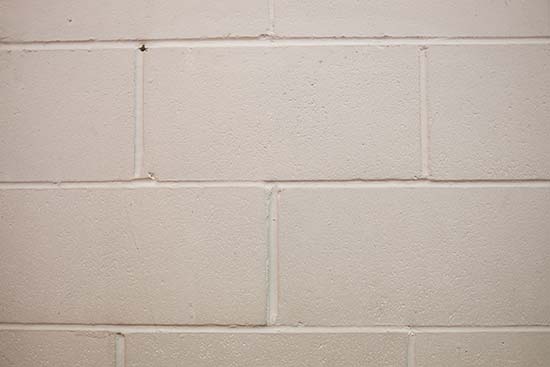 The Fujifilm XF 16mm F1.4 lens has an internal focusing (IF) system with quite an audible high-torque coreless DC motor. In practice, we found the auto-focus to be fast and accurate on the X-T1 camera. Thanks to the IF mechanism the front of the lens does not rotate on focus, which is very good news for anyone looking to use the lens in conjunction with a polariser or graduated neutral density filter.

The Fujifilm XF 16mm F1.4 is not a macro lens, with the close-focus point at 21cm from the sensor plane and a maximum magnification of 0.15x. The following example illustrates how close you can get to the subject, in this case a CompactFlash card. 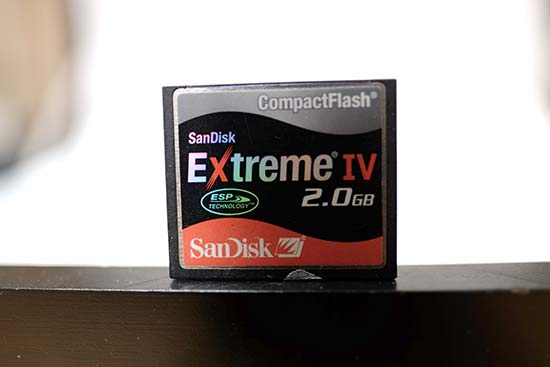 Bokeh is a word used for the out-of-focus areas of a photograph, and is usually described in qualitative terms, such as smooth / creamy / harsh etc. Fujifilm have paid attention to this aspect of lens use, employing a 9-segment diaphragm with rounded blades for pleasing bokeh. In our view, their efforts have been successful for a wide-angle lens - see the examples below.