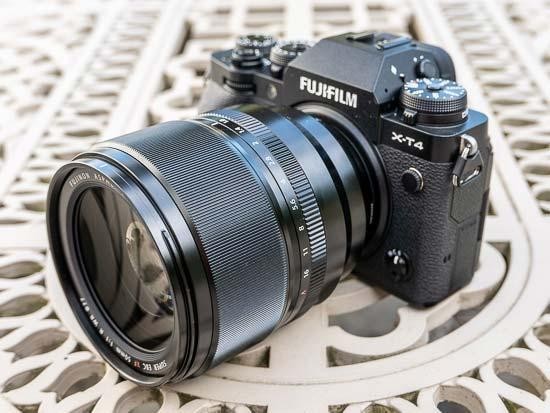 The weather-sealed Fujifilm 50mm F1 lens offers an angle-of-view similar to that of a 76mm lens in a 35mm system, which makes it very well-suited to portraiture.

It has a very bright f/1 maximum aperture for both low-light shooting and throwing the background completely out-of-focus.

Other highlights include an iris diaphragm with nine rounded blades, DC autofocus motor, an aperture ring on the metal lens barrel and a Super EBC coating for improved optical performance.

The optical formula is comprised of 12 elements in 9 groups, including 1 aspherical and 2 extra low dispersion elements.

The Fujifilm XF 50mm F1.0 R WR is one of the biggest prime lenses in the X-system line-up, weighing 845g and measuring just over 10cms in length, perhaps understandable given the amount of glass used in its construction.

It is more than twice the weight of the similar XF 56mm F1.2 lens (405g) and measures an additional 3cm in length, so if portability is a concern, it's perhaps worth sacrificing a little speed and opting for the already excellent XF 56mm.

As you can see in the product photos, somewhat surprisingly it still complements the top-of-the-range Fujifilm X-T4 very well, not feeling too front-heavy and more than matching the body in terms of its build quality.

The manual focus ring is generously wide, smooth and beautifully damped in action without being loose, and it has a ridged, rubberised grip band.

It provides 120 degrees of rotation to allow for precise, enhanced control and quick travel through the focus range to infinity.

There are no “hard stops” at either end of the 70cm-infinity focus range though, making it harder to set the focus point to infinity.

The Fujifilm XF 50mm F1.0 R WR lens has a traditional aperture ring on the lens barrel, which allows you to set the aperture in 1/3 steps, complete with full aperture markings.

The aperture is also shown in the camera's viewfinder or on the LCD screen as you turn the ring.

The aperture ring is nicely damped and makes a distinctive click as you change the setting, although it's a little too easily moved when stored in a pocket or bag.

In practice, we found the auto-focus to be a little hesitant on both the X-T4 and X-Pro3 bodies that we tested it with - it's certainly not up there with the fastest X-series lenses in this regard.

Still, this is intended to be a portrait lens first and foremost, rather than designed for faster moving subjects.

The face and eye detection did work very well to improve the focus accuracy, though, even when shooting wide-open at f/1.0, something that is quite difficult to achieve when focusing manually.

Note that this lens does have quite an audible auto-focusing noise, making it less suitable for video use, again something that has been addressed on other, quieter XF lenses.

The Fujifilm XF 50mm F1.0 R WR is weather and dust resistant with seals in 11 different places, and works down to -10 degrees.

The front of the lens does not rotate on focus, which is good news for anyone looking to use the lens in conjunction with a polariser or neutral density filter, something that is almost compulsory if you want to use the faster apertures outside in bright sunlight.

In terms of accessories, the lens ships with a good quality plastic round-shaped lens hood and a lens wrapping cloth, rather than a case.

Chromatic aberrations, typically seen as purple, blue or green fringes along contrasty edges, are exhibited by the Fujifilm XF 50mm F1.0 R WR lens only in very high-contrast situations, as shown in the example below.

Vignetting is well-controlled even when shooting wide-open at f/1. Stopping down to f/4 completely removes it.

The Fujifilm XF 50mm F1.0 R WR doesn't exhibit any pin-cushion distortion, as you can see in the photo below.

The Fujifilm XF 50mm F1.0 R WR is capable of producing quite nice sunstars when stopped-down to f/16, as shown below, although flare does occur when shooting directly into the sun.

The Fujifilm XF 50mm F1.0 R WR is not a macro lens, with the close-focus point at 70cm from the sensor plane and a maximum magnification of 0.08x. This is almost identical to the XF 56mm F1.2 lens.

Fujifilm have paid attention to this aspect of lens use, employing a 9-segment diaphragm with rounded blades for more pleasing bokeh.

Coupled with the maximum F1.0 aperture, this lens definitely offers the best bokeh of any XF optic.

At F1.0, the spherical aberration is intentionally left to soften the bokeh. At F1.2, the resolution is equivalent to the XF 56mm F1.2. At F2, vignetting is reduced like the XF 90mm F2.

In order to show you how sharp the Fujifilm XF 50mm F1.0 R WR lens is, we are providing 100% crops on the following page.