Fujifilm announced details of its 50mm f/2 Fujinon lens in January 2017. The Fujifilm XF 50mm f/2 R WR lens fits into Fuji’s “XF” range, which denotes it’s a higher quality than the more budget “XC” lenses. The WR in its full name also indicates that it is weather resistant, making it ideal for use with weather resistant Fuji bodies - there are sealing at ten points around the lens barrel. Mounted on a Fujifilm X series body, with the APS-C crop applied, the equivalent focal length of the 50mm lens is 76mm. This puts it just below, in terms of focal length at least, the 56mm f/1.2 lens, which has an equivalent focal length of 85mm. The design of the new lens features 9 elements, to include one aspherical ED lens, in 7 groups. The internal focusing system is powered by a fast and quiet stepper motor. The lens has a coating which is designed to reduce ghosting and flare. As well as being dust and weather resistant, the lens can be used in temperatures as low as -10 degrees. It is available in two colours, black and silver. The Fujifilm XF 50mm f/2 R WR lens is available for £449 / $499 in the UK and the US, respectively.

In comparison to Fujifilm’s other similar focal length lens, the 56mm f/1.2, the 50mm f/2 is much smaller and more compact - making it ideal as a travel lens or just to stick in your bag as a “just in case” option. Weighing in at just 200g also means that you’re barely likely to notice the addition to your kit bag by carrying it around. 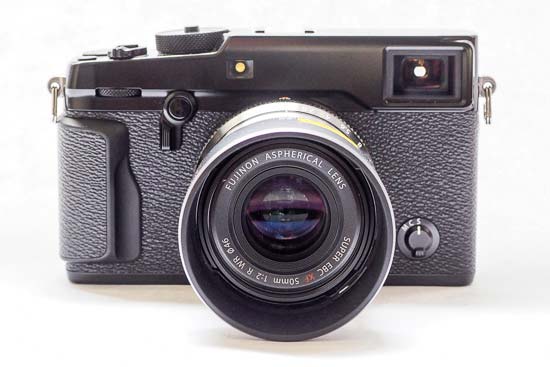 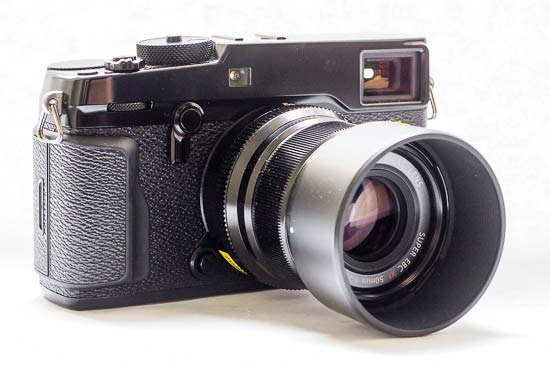 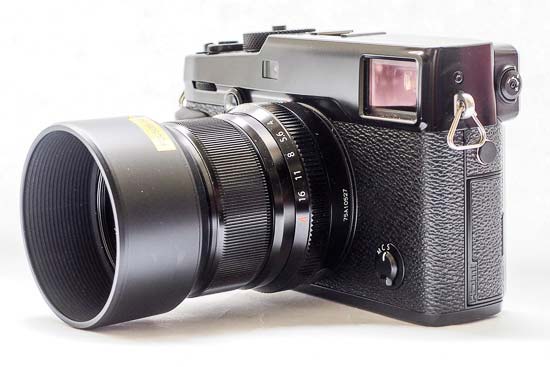 Just because it’s small doesn’t mean that it’s not well constructed. The all metal design of the body gives it a classy look, while it seems most at home on the flatter body of the X-Pro2 - it will of course still work very well on the X-T2 or X-T1.

The only exception to the all-metal design is the plastic lens hood, which is supplied in the box. It’s a shame not to see metal here as well, but the overall look is not too diminished by the plastic addition. The lens hood protrudes quite far from the lens, so it’s worth removing it and turning it around when in storage to save on space. 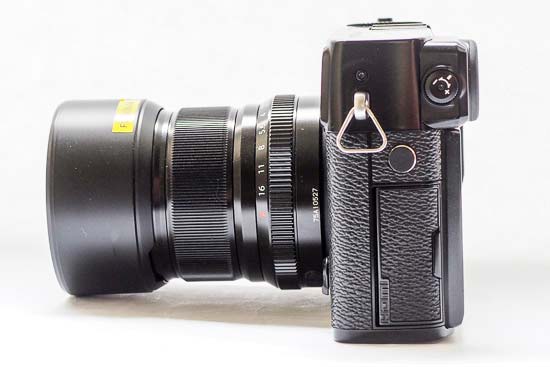 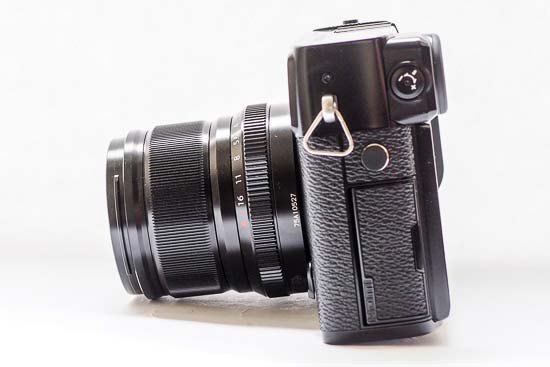 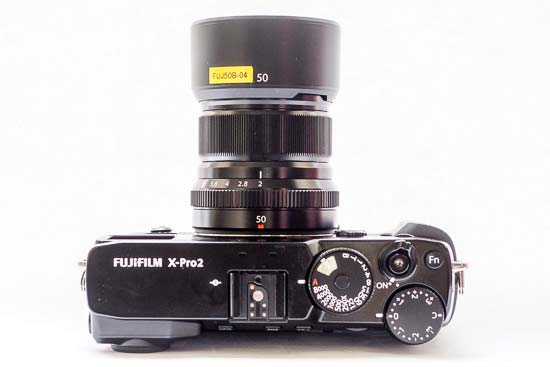 At the base of the Fujifilm XF 50mm f/2 R WR lens you’ll see the focal length (50) marked, just above a red dot. You can use this dot to line up the lens with the dot on whichever camera mount you’re using for quickly mounting the lens.

As with most Fujifilm lenses, the 50mm f/2 WR features an aperture ring. This is marked in full stops ranging from f/2 up to f/16. There’s also an “A” marking, which means the camera will select the aperture for you. You can select 1/3rd stops in between, but these aren’t marked in any way. The ring has a satisfying amount of resistance when you twist it, and there is also an audible clicking sound. Videographers may be disappointed to note that there’s no way to disable the clicking sound from the aperture ring. 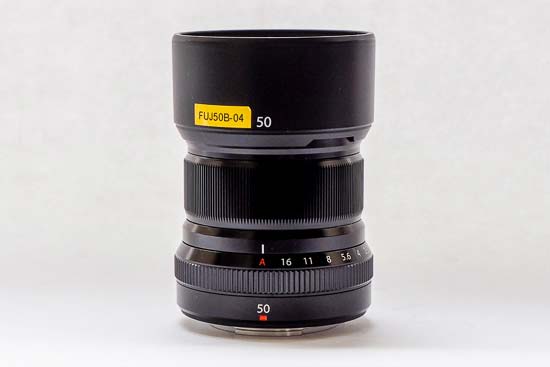 Just in front of the aperture ring, there’s another thicker ring which is used for manual focusing. This ring, like the aperture ring, is ridged and has a satisfying amount of resistance. There aren’t hard stops at either end of the ring, so setting the focusing to infinity isn’t as quick as it could be.

Focusing is internal, so the front element of the lens doesn’t move - which is good news for filter users. Less good news for filter users is that the thread size is 46mm - which is different from the thread size for the other lenses in this range (the 23mm and 35mm lenses both use a 43mm thread). Therefore you’ll either need an adapter or an extra set of filters if you want to use filters between the different lenses. 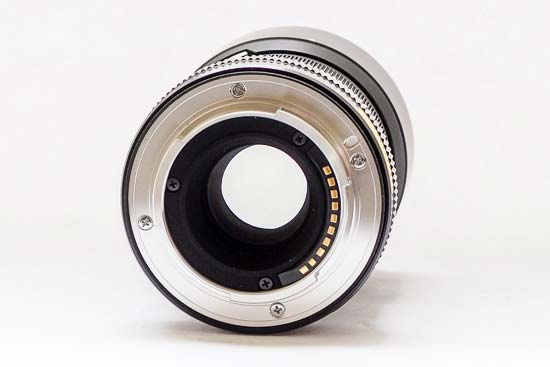 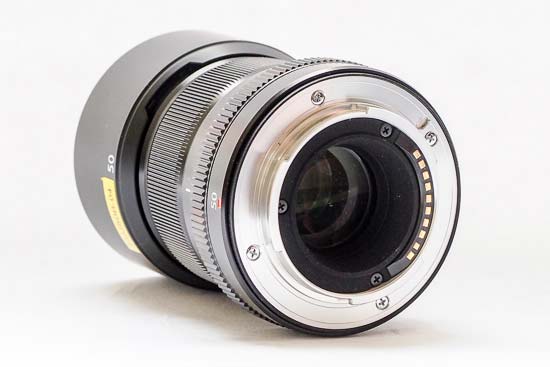 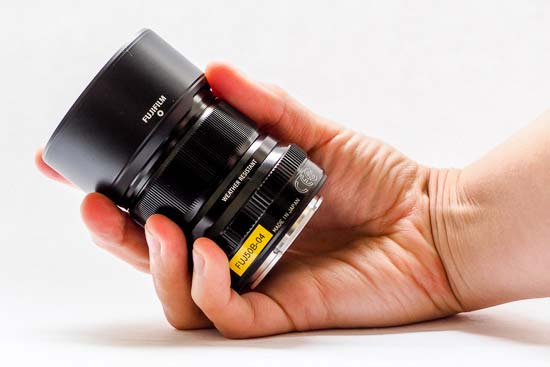 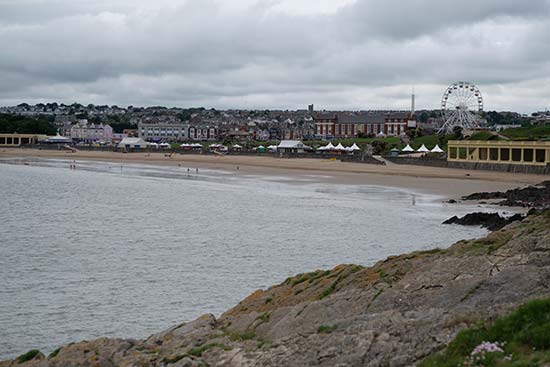 Autofocusing is extremely fast and quiet, locking onto subjects in good light with almost imperceptible speed. If you are shooting in dimmer conditions, you’re likely to notice the lens hunting a little before locking on - but it’s pretty rare for a false confirmation of focus to be displayed. It’s only in the darkest of conditions that the lens focuses to lock onto the subject at all.

The Fujifilm XF 50mm f/2 R WR Lens performs extremely well when it comes to chromatic aberrations - in fact I was unable to find any examples of it in sample images, even in high contrast situations.

When shooting at the widest aperture of f/2, there is some slight light drop-off in the corners of the image. This is particularly obvious when shooting a white wall, but is likely to be fairly unnoticeable with more usual subjects. By f/2.8, the drop off is even less, while it’s completely gone by f/4. There’s virtually no distortion visible in either the RAW of the JPEG files. 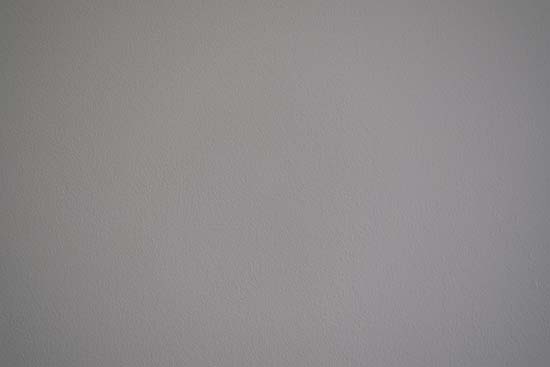 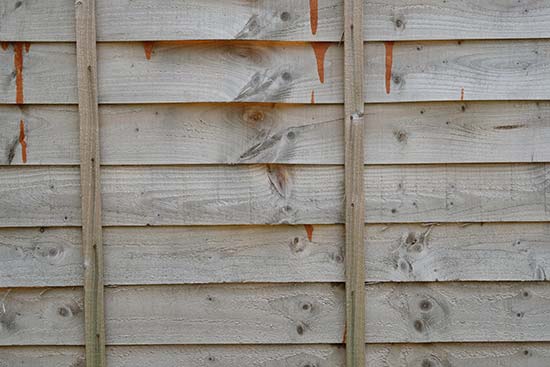 The Fujifilm XF 50mm f/2 R WR Lens has a minimum focusing distance of 0.39 metres, while the maximum magnification is 0.15x. While it is not a true macro lens, it is well suited to typical macro type subjects, such as flowers. 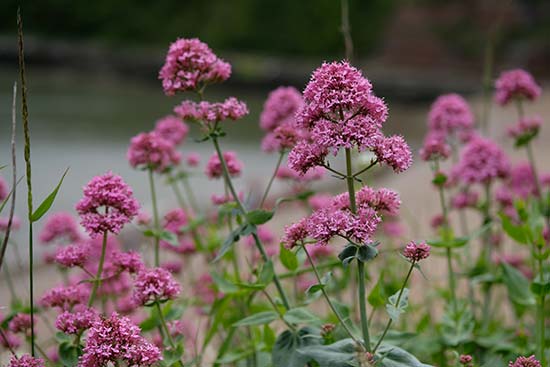 Bokeh is the word used to describe out of focus areas in an image. There are various ways to describe it, such as smooth, creamy or beautiful. The Fujifilm XF 50mm f/2 R WR Lens design features 9 rounded aperture blades, which results in a round, natural and pleasing looking bokeh. We recognise however that bokeh evaluation can be extremely subjective, so we have included some examples so you can judge for yourself.