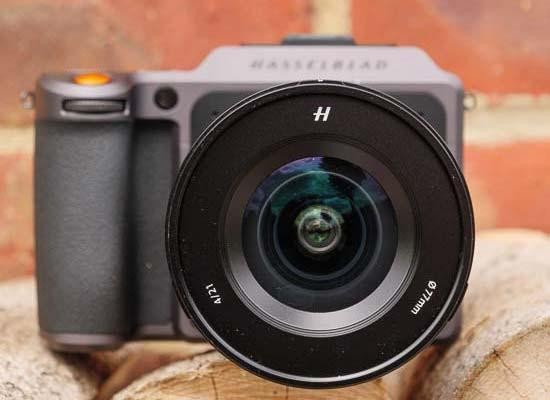 The Hasselblad XCD 21mm F4 is an ultra-wide-angle prime lens, offering the widest focal length available from any of Hasselblad's X-mount lenses, or indeed any other 'digital' medium format lens.

A lens like this is a natural choice for landscape and architecture photography and is designed for the company's X-system digital 'medium-format' (44x33mm sensor size) cameras. The most up to date camera is the Hasselblad X1D II 50C, which we have used for this test.

To be precise, the 21.8mm lens offers an approximate equivalent 17mm focal length (to the full frame 36x24mm sensor format) - that's a 0.79x magnification. On the same basis, that maximum f/4 aperture provides an equivalent depth of field to around f/3.2.

Like all of Hasselblad's XCD lenses, the 21mm f/4 contains a 'leaf' shutter, rather than the shutter being in the camera. A leaf shutter is quiet and minimises vibration - which is particularly handy when shooting at such high resolutions where camera shake can have an adverse effect on images sharpness.

Another benefit to a leaf shutter is that flash sync is possible at any of the available shutter speeds - perhaps less relevant in this lens to, say, a moderate telephoto portrait lens.

Being found in such an expensive pro-level camera system, it's no surprise that the XCD 21mm f/4 lens is a solid bit of kit.

You've got an all-metal barrel and lens mount. Solid doesn't mean unwieldy, though. Quite the opposite - the 21mm lens is a relatively lightweight 600g. It also compact, measuring 106mm in length and it sits really well attached onto the X1D II 50 C camera.

The lens and camera match is spot on - a compact and lightweight pairing, especially considering the sizeable sensor format.

Handling wise, there's not a huge amount to say about any of Hasselblad's XCD lenses. You get automatic and manual focus, with the only physical control on the lens itself being the ridged manual focus ring.

Yes, it's a simple exterior design with a resulting minimalist all-black look. There's no optical stabilisation - not that we'd expect it in any ultra-wide angle lenses. Neither will you find a MF/ AF switch, or focus distance markings which would prove a handy visual aid for manual focusing.

For manual focusing, the most intuitive method is by employing focus magnification over your selected area of the frame - selected by touch focus using the touchscreen of the camera. At 100% magnification, you can enjoy a clear magnified view of your chosen focus area via the large 3.6in touchscreen or EVF of the X1D II 50C.

Focus peaking is less helpful on this lens, where a lot of areas can appear to be in focus when in fact they are not completely sharp.

For a lens like this primarily designed for landscape photography, we'd like to see features such as focus distance markings displayed in-camera or physically on the lens itself.

If we're totally honest, the focus ring feels OK, but not great. There is a stubborn resistance to it that has a slightly awkward suction feel.

Focusing is internal, meaning the lens does not extend through the various focus distances. You'll enjoy the positive benefit of minimal focus breathing, although it's there.

Autofocus in the X1D II is ponderous. However, of all the lenses we have used with the camera, the Hasselblad XCD 21mm F4 lens is on the quicker side. Given our experience, we think that it's partly down to the relatively lightweight lens elements, because focusing in heavier lenses such as the 80mm f/1.9 is slower.

In addition to a quicker focusing speed, autofocus is also quieter in this lens when compared to the heavier lenses.

While we are talking about quiet operation, special mention goes to the leaf shutter. Built into the lens itself, the shutter is quiet and creates very little vibration. Given the camera and lens combination is designed primarily for large reproduction landscape and architecture photography where crisp detail is vital, minimal vibrations are much appreciated.

We tried the lens for night photography in a scenic town centre using long exposure times and really enjoyed how easily the camera and lens pairing handled in this scenario.

That 1/2000 sec minimum shutter speed is on the modest side. However, it is largely irrelevant with this lens, given the maximum f/4 aperture. That's because even in bright light you won't need a ND filter to reduce light transmission for an accurate exposure value. Ultimately, those ultra-quick shutter speeds are less relevant in this lens.

All in all, compared to competing medium format camera and lens combinations, the handling of the XCD 21mm f/4 lens does not fare so well. However, within the context of the XCD range of lenses, it is one of the most useable and a perfect pairing with the X1D II 50C camera for its obvious use.

The 21mm focal length gives an equivalent (36x24mm full-frame) focal length of 17mm and a (horizontal) angle of view of 92° on the medium format sensor (44x33mm). This is the widest angle lens of its type.

Overall lens distortions are very well controlled, especially chromatic aberrations (colour fringing). We've used the lens in all of its aperture settings in a variety of scenarios that would demonstrate CA, and we have found no obvious aberrations, even in the uncorrected raw images exported using Hasselblad's Phocus raw editor. This is great news for landscape photographers in particular. Bravo, Hasselblad.

With the wide focal length and modest f/4 maximum aperture, there is less concern about LOCA (chromatic aberrations in out-of-focus areas).

Light fall-off, which the difference in brightness between the centre and the edges of the frame and is also know as vignetting, is reasonably well controlled by the Hasselblad XCD 21mm F4 lens.

At f/4, light fall of can be seen in un-corrected raw images although it is not severe. Light fall off remains longer than normal as you close down the aperture settings - it is seen a fraction at most aperture settings. However, it's always soft and never really a big issue.

There is some barrel distortion in unedited raw images. This is corrected automatically in Hasselblad's Phocus editing software without any discernible compromise on final image quality. The software is free.

The Hasselblad XCD 21mm F4 lens has a firm control over lens flare and ghosting, both of which can cause unwanted reduction in contrast when not controlled well. Furthermore, sunstars are reasonably lengthy, although there is at times a 'doubling' effect in some of those individual sunlight rays.

Truth is, bokeh is not the first thing you look for in an ultra-wide angle lens designed for landscape and architecture photography. It's actually a challenge to get much bokeh in real world images.

However, we tried of course, with one scenario using the close focusing distance on a nearby tree with backlit leaves and branches out-of-focus in the background. Bokeh is OK, with no nasty surprises.

In order to show you how sharp the Hasselblad XCD 21mm F4 lens is, we are providing 100% crops on the following page.