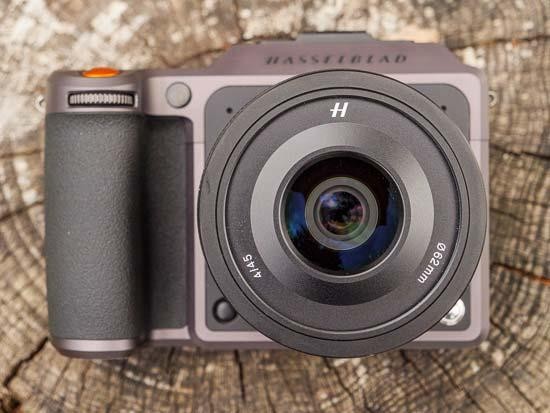 In the shape of the Hasselblad XCD 45mm f/4 P, we have the smallest and lightest digital medium format autofocus lens on the market, complementing the already portable Hasselblad X1D cameras that it is designed for.

We'll stake a guess that the P stands for portability (we're not quite in pancake territory here), with a minuscule 47mm length and positively lightweight 320g. Paired with the X1D II 50C that we have used for this test, the combination is a fraction over 1,000g and sits in the hand perfectly. It's all very impressive for such a sizeable sensor format.

There is already an XCD 45mm f/3.5 lens available, but this more recent lens has some extra tricks up its sleeve besides is portable physical size. An improved design results in a quieter operation - the built-in leaf shutter and AF motor are audibly quieter.

And here's another carrot - being available for around £1,000, the XCD 45mm F4 P is a fraction of the cost compared to other lenses in the range and less than half the price of the other 45mm lens.

Hasselblad's digital 'medium-format' features a 44x33mm camera sensor size, with a 0.79x magnification. That means the 45mm F4 P lens has a 35mm focal length (full-frame equivalence), with the maximum f/4 aperture offering an equivalent depth of field to around f/3.2.

When it comes to ease of use, we'll say straight off the bat that the XCD 45mm F4 P lens is the best that we have used in Hasselblad's X-series of lenses.

Firstly, we've got to mention again its diminutive size and weight. Considering we're talking about digital medium format, this is a tiny lens. Its pairing with an X1D II 50C camera is a dream. On appearances alone, this 35mm equivalent lens appears ideal for street photography.

And although it's a fraction of the price of other XCD lenses, the Hasselblad XCD 45mm f/4 P is still well made, again with an all-metal barrel and lens mount. It's also got the rubber seal in the mount providing a firm seal between lens and camera body. It's not officially classed as weather-sealed, but you can be confident that nasties from the elements will stay out.

The only physical control on the lens itself is the ridged manual focus ring. Compared to some other XCD lenses, its rotation feels pleasant in the hand and the barrel does not extend as you shift between focus distances.

Like all XCD lenses, critical manual focusing is best achieved by using focus magnification. And the X1D II 50C camera provides clear 100% magnified viewing for this purpose, via its large 3.6in touchscreen or EVF.

We find focus peaking a little less helpful with the X1D and XCD lens combination because it can often appear cluttered and hard to discern what is and isn't in focus. We've said it before, but focus distance markings are not on the lens or indicated in-camera either, which is a shame.

Of all the XCD lenses we have tested, autofocus is quickest in the XCD 45mm F4 P lens. However, we should say that autofocus in the Hasselblad X-system is slow by today's standards. It might be possible to use this lens for street photography or moderate action, but really the autofocus system is more suited to static subjects.

As well as focusing quicker than heavier XCD lenses, the Hasselblad XCD 45mm f/4 P lens has the quietest focus of them all. The lens construction is simpler (and lighter) than others, made up of 9 elements in 7 groups with two aspherical lenses, and the resulting discreet operation of the lens impresses.

Quiet focusing is backed up by the lens's built-in leaf shutter. Unlike most other camera systems, Hasselblad's XCD lenses contain the shutter rather than the camera itself. A leaf shutter action is quieter than the mechanical type found in DSLRs. (Of course it's not silent like the electronic shutter option found in numerous mirrorless cameras, but it is very quiet indeed.)

Leaf shutters also produce less vibration than a mechanical shutter. Adverse impact on image quality due to shutter vibration and camera movement is more obvious in a high-resolution camera like the 51.2-million-pixel X1D II 50C. Critical detail is viewed more intently here, so the leaf shutter is welcome.

Another benefit to a leaf shutter is that flash sync is possible at any of the available shutter speeds, with a shutter speed range of 1/2000sec to 68 minutes. And selecting the shutter speed in-camera is easy at 1/3EV increments, via the X1DII's intuitive and responsive touchscreen.

With a maximum f/4 aperture, the modest 1/2000 sec minimum shutter speed is fast enough because it isn't really possible to shoot beyond the lens's capability for accurate exposures in bright light, unlike with the faster XCD 80mm f/1.9 lens, for example.

To summarise our time using the XCD 45mm F4 P lens, it has been the easiest to use of all XCD lenses. It's the smallest and lightest, it's the most responsive regarding focusing, plus it's the quietest in operation. To top it all off, it's a perfect size match with the X1D II 50C.

There is a relatively simple lens construction, consisting 9 lens elements in 7 groups, two of which are aspherical lenses.

We've used the lens in all of its aperture settings in a variety of scenarios that would demonstrate CA, and we have only found the most mild aberrations. Truly, any that we did find were negligible in our uncorrected raw images exported using Hasselblad's Phocus raw editor.

However, from our basic observations, it appears that LOCA (chromatic aberrations in out-of-focus areas) can be seen in some examples.

Light fall-off, which the difference in brightness between the centre and the edges of the frame and is also know as vignetting, is very well controlled by the Hasselblad XCD 45mm f/4 P lens.

At f/4, light fall of can be seen sharply in the corners of un-corrected raw images, but it is not severe. Close down to f/5.6 and light fall off is all but gone. This is a solid performance.

Even when shooting straight towards the sun, the Hasselblad XCD 45mm f/4 P lens has a firm control over lens flare and ghosting, both of which can cause a reduction in contrast if not controlled well.

Sunstars are reasonable. Those individual sunlight rays are not the longest we have seen, nor are they the most symmetrical, but they are clean and tidy.

With a minimum 0.35m focus distance and maximum 1:5.2 reproduction (0.52x magnification), the Hasselblad XCD 45mm f/4 P lens is able to get moderately close up to subjects, but is by no means a lens we would use for macro photography.

Of course the large sensor size paired with maximum aperture easily enables a distinct separation between sharp focus and out-of-focus areas, but look closely and bokeh is not the forte of the Hasselblad XCD 45mm f/4 P lens.

On all three of those counts, bokeh does not fare particularly well. Out-of-focus detail at times exhibits LOCA, worming and less pleasant shapes where the lens aperture blades are visible rather than rounded off.

In order to show you how sharp the Hasselblad XCD 45mm F4 P lens is, we are providing 100% crops on the following page.