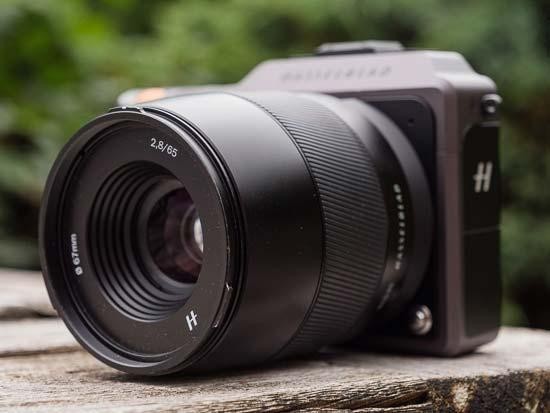 Hasselblad's digital medium-format features a 44x33mm sensor size, with a 0.79x magnification. Therefore, this lens has a full-frame equivalent focal length of 50mm (approx), while its maximum aperture has an equivalent depth of field to a f/2.2 aperture.

Focal length and features wise, this is a good all purpose lens. And with its quiet built-in leaf shutter offering flash sync at any of the available shutter speeds up to the maximum 1/2000sec, it's a dream bit of kit for studio photographers.

As far as 50mm f/2.2 (equivalent) lenses go, the Hasselblad XCD 65mm F2.8 is sizeable and weighty. It is part of an expensive pro-level camera system though, and feels right at home attached to the Hasselblad X1D II 50 C camera that we used for this test.

Aesthetically, you've got a minimalist all-black look that suits the camera well. We're looking at a relatively compact lens, measuring 93mm long and the camera/ lens pairing will turn heads.

The Hasselblad XCD 65mm F2.8 lens has an all-metal barrel and mount and weighs in at 727g, so there is a reassuring feel that proper glass is housed inside. It's actually a relatively simple lens design, featuring 10 elements in 6 groups.

You get automatic and manual focus and switching between the two is done in-camera. In fact, the only physical control on the lens itself is the ridged manual focus ring.

While the focus ring looks good and feels nice in the hand, truth be told in use there is something about it that doesn't feel 100% right. It's not quite as smooth and fluid as we would hope.

Being part of the Hasselblad X system, there are various plusses and minuses regarding the handling of the 65mm F2.8 lens.

Though quicker than the X1D, autofocus in the X1D II is still ponderous. And being a lens with a bit of weight to it, the AF motor seems to struggle a little to move through the focus distance range, of which there is no avoiding in this contrast detection based system.

Whatever the lighting conditions, expect an autofocus speed that feels dated, plus it's audible noisy. We recently reviewed the XCD 45mm F4 P lens which has a quicker and quieter autofocus. This goes to show that the motor in the lens itself is not performing to the potential speed of the X1D II camera.

What we will say though, is that the hit ratio of sharp shots once autofocus has acquired its target is impressively high. It's impressive too because the autofocus system is a simple spot focus option and the smallest possible spot size is still too large for precise focusing such as on a person's eye in an upper body portrait.

It's easy to select the autofocus point by touch on the camera's large and responsive 3.6in touchscreen. Should you choose manual focus, the most intuitive method to ensure critically sharp focusing is by employing focus magnification over your selected area of the frame - again by touch.

At 100% magnification, you can enjoy a clear magnified view of your chosen focus area via the touchscreen or EVF. We've said it before, but without focus distance markings on the lens itself nor displayed in-camera, you're really relying on sight using focus magnification.

A final note on focusing is that while going through the various focus distances, the lens barrel extends by a considerable amount.

Not a comment on the Hasselblad XCD 65mm F2.8 lens but specifically the camera system - start up time is slow. From turning the camera on, to acquiring autofocus and capturing an image, it's around 7 seconds. That time can be halved by leaving the camera in its sleep mode. Compared to the Fujifilm GFX system, it's slow.

A shift in tone. Hasselblad's XCD lenses contain a leaf shutter - there is no shutter in the camera like in most other camera systems.

There is much to appreciate about a leaf shutter. It is audibly quiet compared to a mechanical camera shutter, plus it creates very little vibration.

In Hasselblad's system, the leaf shutter offers a shutter speed range from 1/2000sec to 68 minutes, without the need for a bulb mode in those long exposure times like in most other camera systems! You can manually dial in whatever shutter speed you desire and we love how the X1D II is setup to do this.

Perhaps more relevant than long exposure times is the minimum 1/2000sec shutter speed. It may appear on the modest side, but it does cope with the camera's maximum f/2.8 aperture. If the lens were any faster like the 80mm f/1.9, then ND filters would need to come into play. (nb. should you want to use lens filters, it is possible via the 67mm lens thread.)

Flash sync is possible at any of those shutter speeds, while most other systems max out at around 1/250sec. Flash photography with fast apertures - your f/2.8's - is not possible with other systems without blowing out the exposure (ND filters aside). Not so with the XCD camera system - there's no real limit to what aperture you use for accurate exposures. This is a flash/ studio photographer's dream.

The leaf shutter is a shining light in a lens that otherwise doesn't provide the best handling experience, with focusing being the single biggest complaint.

There's a relatively simple lens element design, with 10 lens elements in 6 groups. The information is not readily to hand, but from looking at bokeh in images at f/5.6 we can assume there are 8 aperture blades.

Chromatic aberration (colour fringing) is mostly absent. In high contrast detail such as tree branches against a bright sky, we can see a little magenta and green fringing when using the f/2.8 aperture. In identical images at f/4, the effect is all but gone and certainly we can't see any from f/5.6. CA in RAW format images is easily corrected using Hasselblad's free Phocus raw editor.

Light fall-off, which the difference in brightness between the centre and the edges of the frame and is also know as vignetting, is very well controlled by the Hasselblad XCD 65mm F2.8 lens.

At f/2.8, light fall off can be seen in un-corrected raw images but it is largely kept to the corners and has a subtle gradation. Stop down to f/4 and light fall off has all but gone.

There is a 0.5m minimum focus distance and maximum reproduction of 1:5.4 (0.54x), meaning the Hasselblad XCD 65mm F2.8 lens is able to capture macro details to approximately half their real size. So while this is not officially a macro lens, it is possible to capture some close up detail in sharp focus.

As a lens ideal for portraits, we've taken extra interest in bokeh. Out-of-focus detail is lovely when shooting at f/2.8. Smooth, rounded, largely free of longitudinal chromatic aberrations. In the corners, the shape of bokeh shifts from a rounded shape to what we call cats eye. It's a common effect and whether it's an issue is down to personal taste. We don't mind it.

Stop down to f/5.6 and the rounded shape transforms into a clear octagonal shape - showing the lens aperture blades. There are signs of this at f/4 but the shaping is acceptable.

Ideally the Hasselblad XCD 65mm F2.8 lens would hold the rounded shape more at f/4, but it's not a deal breaker by any means. Arguably this lens will be used at it's maximum aperture for portraits and it really delivers (plus image sharpness is fantastic at this aperture setting).

Overall, it's not the best bokeh we have ever seen, but it is very good especially for this type of lens.

In order to show you how sharp the Hasselblad XCD 65mm F2.8 lens is, we are providing 100% crops on the following page.