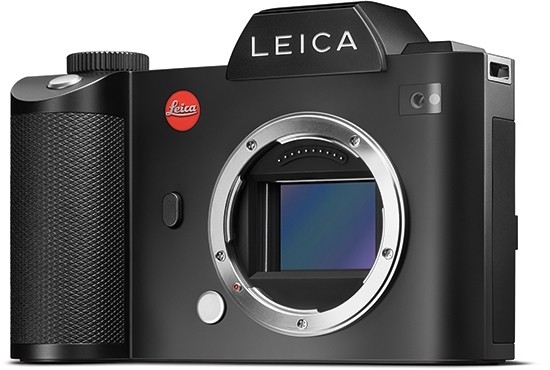 The Leica SL (Typ 601) is a 24 megapixel compact system camera with a 35mm full-frame (24 x 36mm) CMOS sensor with no optical low pass filter, 4K video with a frame rate of 30 frames per second, the fastest auto-focusing of any full-frame system camera, a 4.4million pixel electronic viewfinder, a 2.95” LCD display with a viewing angle of up to 170° and touchscreen control, Leica Maestro II series image processor, a continuous shooting rate of up to 11 frames per second, built-in wi-fi, NFC and GPS connectivity, a highest ISO setting of 50,000 and support for dual UHS II memory cards. The recommended retail price of the Leica SL (Typ 601) is £5050 / $7450.

In terms of its design and control layout, the Leica SL (Typ 601) looks very similar to the flagship Leica S (Typ 007) medium format camera. Machined from two blocks of solid aluminium and featuring precisely-engineered seals around all of the controls, the Leica SL (Typ 601) is the best mirrorless camera that we've ever reviewed in terms of build quality - there is simply no flex or give in the camera body, at all, resulting in an immensely solid feeling camera that goes some way to justifying the rather eye-watering price-tag. The Leica SL (Typ 601) sports a stealthy all-black colour-way, with the substantial handgrip and the rear of the camera featuring a subtle diamond leatherette pattern to aid grip.

We tested the SL with the new Leica Vario-Elmarit-SL 24–90 mm f/2.8–4 ASPH. zoom lens, which as well as adding on £3,150 to the overall price, makes the Leica SL setup look enormous by compact system camera standards. Indeed, you'd be forgiven for thinking that the Leica SL looks more like a pro-DSLR with this lens attached. The 24-90mm is the first native lens for the SL camera, with the Leica APO-Vario-Elmarit-SL 90–280 mm f/2.8–4 and Leica Summilux-SL 50 mm f/1.4 ASPH. due to follow later this year.

The SL actually uses exactly the same lens mount as the Leica T camera, now renamed the L-mount, so you can fit existing lenses designed for the Leica T if you wish, which results in a 1.5x crop factor delivering 10.7 megapixel images. Compatibility with the T-mount also means that any M-mount rangefinder lens can be used via the existing adapter, with Leica planning to introduce further adapters for PL-cine lenses, the medium format S-mount lenses and R-mount SLR lenses sometime in 2016. Indeed, Leica claim that "the exceptional compatibility of the Leica SL-System gives photographers access to almost all Leica lenses ever made."

Leica took the brave decision to extend the telephoto range of the Leica Vario-Elmarit-SL 24–90 mm f/2.8–4 ASPH. to 90mm and make it a variable aperture optic, rather than keep it at f/2.8 throughout but shorten the reach. The fastest aperture of f/2.8 is only ever available at the 24mm setting, reaching f/3.6 at 50mm and f/4 just before 90mm. There's no in-body OIS system, bu the 24–90 mm f/2.8–4 ASPH. zoom lens does boast an effective optical stabilization system, which is turned on and off via the Leica SL's menu system rather than more conveniently by a switch on the lens barrel.

As this is a Leica camera, obviously manual focus is provided, and very good it is too. As you'd expect, the manual focus ring on the 24-90mm lens has a lovely feel, and three different focusing aids are provided - auto magnification (x3 or x6), focus peaking and auto magnification plus focus peaking. With the high-resolution viewfinder we found it very easy to accurately determine sharpness.

Above the LCD screen is the integrated electronic viewfinder, and what a viewfinder it is! With a massive resolution of 4.4million dots, 60fps refresh rate and 0.82x magnification, this is the most detailed electronic viewfinder that we've ever had the pleasure of looking through. The same key shooting information that's shown on the rear LCD is unobtrusively displayed above and below the frame, and there's built-in dioptre control for glasses-wearers.

The size of the back plate LCD is 2.95-inches and the resolution is a respectable 1,040,000 pixels. The Leica SL (Typ 601) has a nicely balanced touchscreen interface via the 2.95-inch LCD screen which takes up about two thirds of the back plate and which works in tandem with the camera's physical controls. Touch AF allows you to focus on your subject by simply tapping on the LCD screen, with about 80% of the screen available to use. In image playback, you can simply drag left and right to go through the sequence of images and pinch/double-tap to zoom in and out, although you can't use the main menu system via the touchscreen (only enter information for things like the wi-fi settings).

The Leica SL (Typ 601) features built-in IEEE 802.11 b/g/n Wi-Fi connectivity for wirelessly connecting to other devices such as a smartphone, tablet or computer. You can easily transfer your images and also control the camera remotely via the free Leica app (iOS and Android), which, amongst other functions, allows remote setting of the shutter speed and aperture. The app also allows you to send your images to social networks or email them. The SL (Typ 601) also has built-in NFC which provides tap-to-connect functionality with compatible devices and built-in GPS tracking too.

The front of the Leica SL (Typ 601) is adorned with the famous red Leica badge and logo positioned to the top-left of the lens. Top-right, if viewing the camera front-on, are two portholes containing the traditional AF assist/self timer lamps. On the left of the lens is a grey circular button for releasing the lens and a black lozenge shaped Fn button for, by default, setting a custom white balance using a graycard. As the name suggests, the Fn button can be reprogrammed to another control of your choosing.

There is a vacant hotshoe for an accessory flash on top of the camera offering full compatibility with the Leica SF 24D and SF 58 system flash units, but no built-in pop-up flash. To the left is a rather inelegant hump that houses the GPS unit, and to the right is a square 1.3-inch monochome LCD screen that handily displays all of your key current settings. Alongside this are four controls - the tactile shutter release button, a large unmarked shutter speed dial, an unmarked button for toggling between stills/video mode with a longer press setting the exposure compensation, and a red button for recording video.

The Leica SL (Typ 601) readies itself for action in 1-2 seconds. Squeeze the shutter release button in single shot mode to take a maximum resolution image and the screen instantly displays the resultant image. Take a top quality JPEG and Leica's 'DNG' file version of Raw and the camera isn't any noticeably slower however, plus the advantage of the DNG format is that it can be opened directly by Photoshop without any specialist conversion software required. The media of choice is the expected 'all varieties of SD card', including the latest and fastest UHS-II format. The SL offer single shot ('S') and continuous shooting ('C') options (High (11fps), Medium (7fps) and Low (4fps) settings), with the 2GB internal buffer allowing up to 33 DNGs or unlimited JPEGs to be recorded at the highest 11fps rate. Note that the headline 11fps rate is only achieved by locking the focus at the first frame - you need to select the Medium setting to get full-time AF during the burst sequence.

The Leica SL has a very fast and pleasingly quiet 37-point contrast-detection auto-focus system. Though the auto focus occasionally hunts to find a target in low-light conditions, overall it's very quick to lock onto and determine focus and exposure. You can choose to expand the 37 circular points to 49 points arranged in a rectangle, with the option of either Static or Dynamic (Tracking) focusing. The latter locks onto the subject when you half-press the shutter and tracks it through the frame using a green rectangle. In addition to selecting one AF point from the 37/49-point options, the Leica SL can be set to a single point in the centre of the frame, a movable 9-point zone mode, or the face-tracking auto-mode.

The back of the Leica SL (Typ 601) features the on-off switch to the left of the electronic viewfinder, with an unmarked button on the right for toggling between the the EVF, rear LCD, or eye sensor for automatic switching. Alongside this is a tactile joystick that's used for navigating through the menu system, setting the focus point, and activating auto-focus by pressing it in. The thumb-operated command dial over at the top right sets the aperture. Pressing the command dial in allows you to toggle between the various shooting modes (P/A/M/T).

Surrounding the LCD screen are four large, unmarked buttons which are used to playback images, choose the display mode, set the magnification level, and access the menu system. A longer press of each button accesses the focus mode, profile, white balance and ISO options. You can reconfigure what the longer presses of each button do via the Setup>Short Cuts menu, but you can't change what a short press does. Using four unmarked buttons to access the majority of the camera's key controls sounds like a user interface disaster, but while it does take a little while to get used to, in practice it's actually surprisingly easy to use, and mostly customisable too.

The right hand flank of the SL (Typ 601) features a large lug for attaching the strap and the dual memory card slots housed inside a weather-proof compartment. The left flank has the second lug and a a flip open rubber flap protecting four ports: USB 3.0 socket, HDMI output, a proprietary connector for headphones / microphone / remote release, and a flash sync socket at the top.

The base of the Leica SL (Typ 601) features a marginally off-centre screw tripod thread, a multifunctional interface for the optional handgrip, and a large catch protected compartment housing the supplied BP-SCL4 lithium-ion battery. The Leica SL (Typ 601) comes with a two-year warranty as opposed to the usual one, a year's accidental damage cover, and a download option for Adobe Lightroom, with the code provided once the product has been registered.