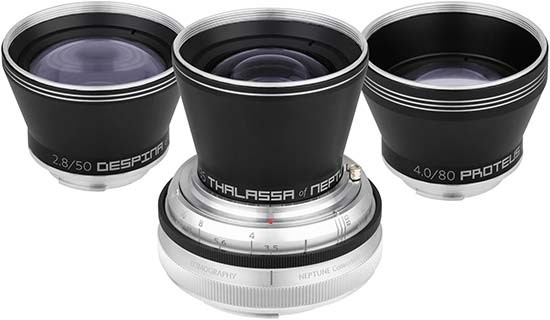 Lomography’s Neptune Art Lens system consists of “three prime lenses in one”. It uses a base, to which you can attach three different focal length lenses - 35mm, 50mm and 80mm. From the base you can control aperture, with each lens having an optimum maximum aperture. In the base you can also place aperture plates to control the shape of bokeh (out of focus areas). A macro adapter ring is also supplied in the box for close-up shots.

The system is available in a variety of different mounts. For this review, we have been supplied with a Nikon F mount kit, but there are also kits available for Canon EF, Pentax K, and adapters for Micro Four Thirds, Sony NEX/E and Fuji X mounts.

Funding for the system was sought via Kickstarter, with the company raising nearly $600,000 to get it into production. At present, there are just three focal lengths available in the system, but there are plans to introduce other focal lengths in time, particularly a wide-angle lens. 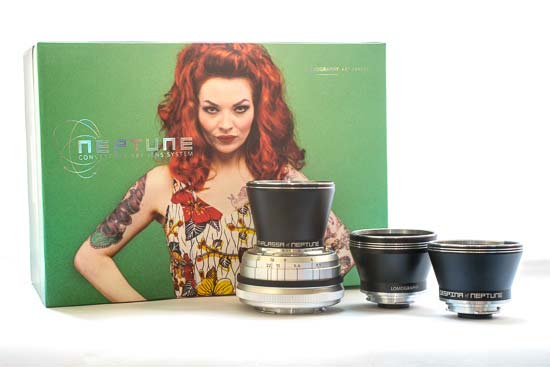 The Neptune Convertible Art Lens System is a bit of a strange system when you compare it to normal lenses, that may take you some time to fully get your head around.

At present, the system consists of three different focal lengths (more are promised), which each attach to a single lens base, which you also use to control focus and aperture. The individual lenses are very small - being even smaller than Micro Four Thirds lenses, meaning you can carry the whole system around with you in a small bag. 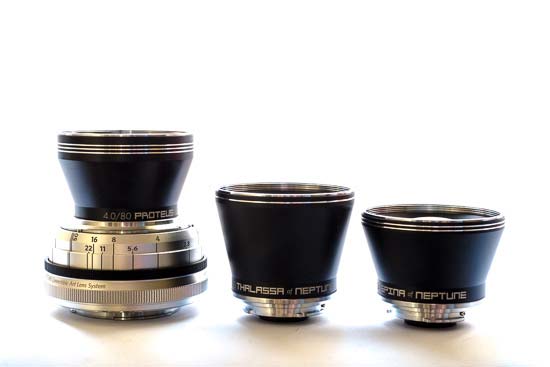 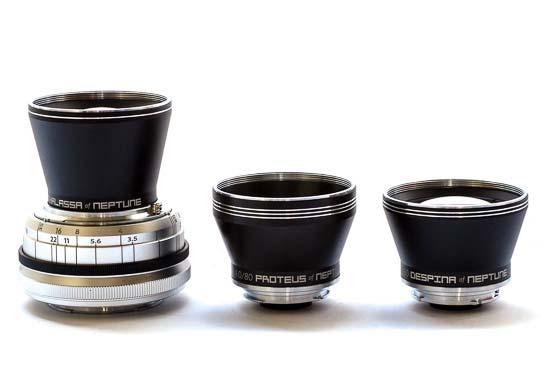 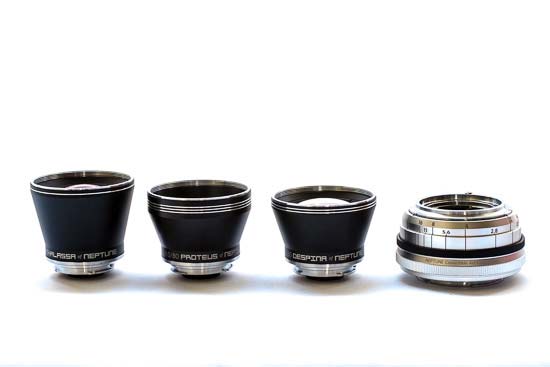 The lens base attaches to your camera’s mount. For the majority of this review I have been switching between a Nikon D4S and a Nikon D500. You can leave the lens base attached to the camera and swap between the different focal lengths as there is a separate release lever for each lens, as well as one to release the overall unit from your camera.

On the lens base you’ll find you can control both the focus and the aperture. This is an interesting way to work, since you can take the aperture beyond what is recommended as the “maximum” aperture for each lens. Before you do anything, you’ll need to put the lens base into the correct position. There are three different positions representing the different focal lengths - while the attached lenses will work no matter what position it’s put in, you may not get optimum performance. What will happen if additional lenses are introduced into the system isn’t clear. 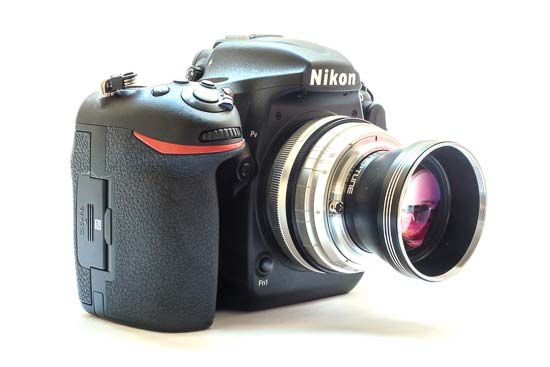 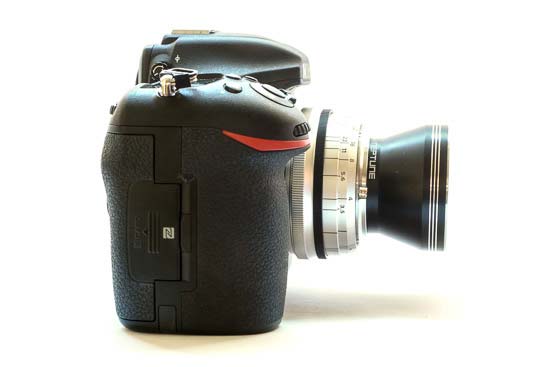 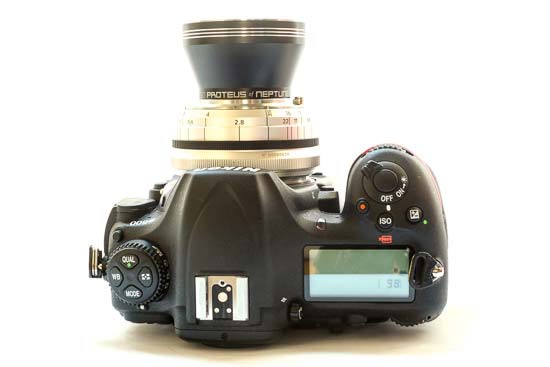 To move between the three different positions, you need to pull the larger aperture ring slightly away from the housing and twist into the relevant lens position. You should hear a slight click when it reaches the edge of each relevant position, and once there it’ll be locked in place until you pull the ring again. Moving the focusing ring causes the aperture ring to shrink back in towards the camera - when this is the case, it’s much more difficult to rotate the ring, so you may find that you need to adjust the focusing ring in between each lens change too.

Each section of the aperture ring has the aperture marked in full stops. Each lens has a recommended maximum aperture; for the 35mm it is f/3.5, for the 50mm it is f/2.8, and for the 80mm it is f/4.0. You can however go past the maximum aperture for the 35mm and 80mm lenses if you wish. You’ll hear no audible noises or clicks as each aperture is selected, so it does feel a little like a rough approximation, or guess work - especially for apertures which are close together. 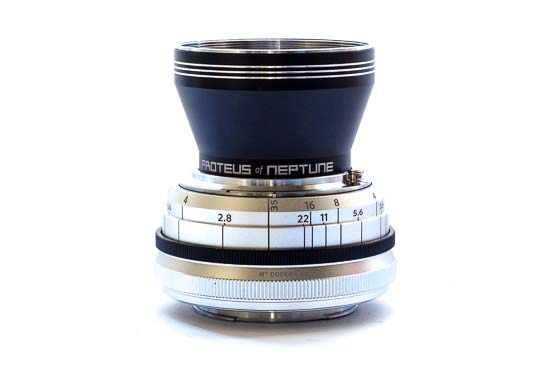 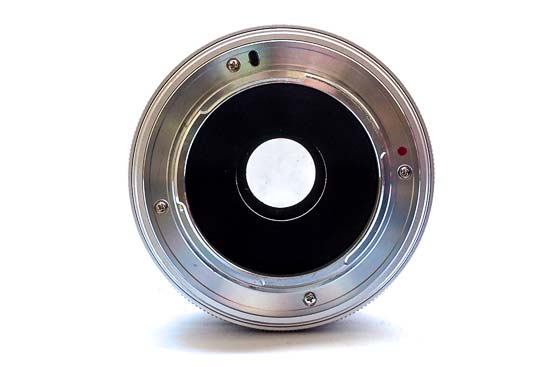 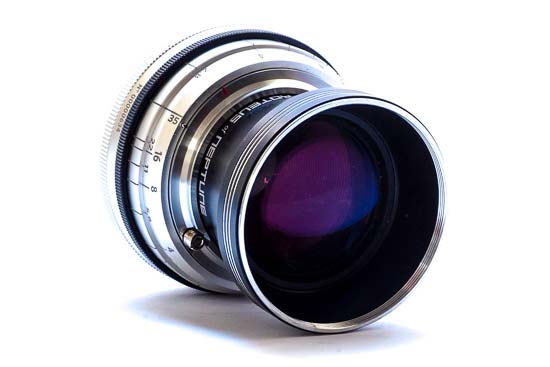 The Neptune Convertible Art Lens System is completely manual focus, relying on you moving the ring around the base to set focus. It can be helpful to shoot in Live View to get precise focus for this reason.

The manual focus ring is found at the base of the lens. It has hard stops at either end and provides a satisfying amount of give. It doesn’t feel either too loose or too stiff, making it quite satisfying to work with. You can use the lenses while shooting through a viewfinder, but engaging Live View (with the camera mounted on a tripod) is a good way to ensure sharpest focus.

One of the most intriguing things about the lens system is that you can change the shape of the aperture using the provided aperture plates. There’s six included in the package, including star shapes, crosses, teardrops and more. To use them is very simple - simply slot the aperture plate in the lens base before you attach the lens. The easiest way to then remove the plate is to tip the camera upside down and catch it as it falls out - some of the plates are prone to get stuck, in which case a sharp fingernail can be required to extract it. 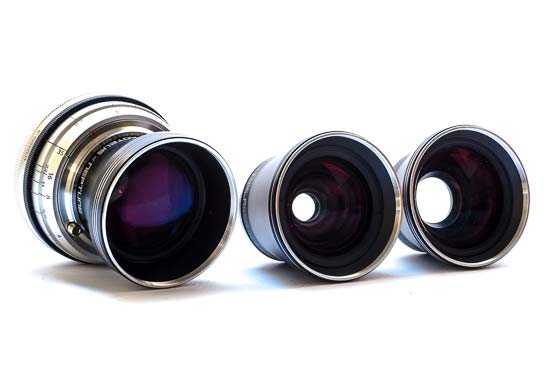 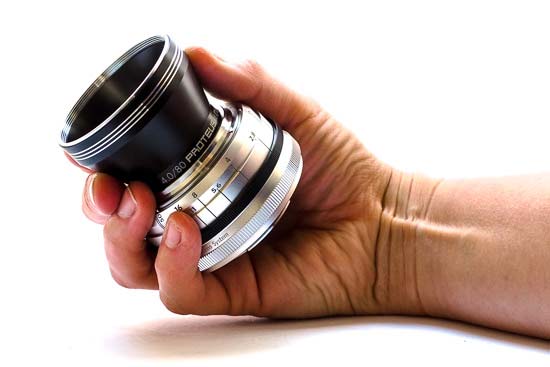 As well as the lenses, and the lens base, also provided in the box is a Macro Adapter Ring. This is basically a reversing ring and allows you to mount each lens backwards onto your camera to turn it into a rudimentary macro lens. You don’t get control over focusing, you simply move the camera closer to the subject to find where the correct distance is - this doesn’t make it particularly useful for composition unless you can control the subject.

Also provided in the box is a lens cleaning cloth, and a pouch was has space for two lenses (presumably there’s an assumption that the third lens is mounted to the camera). 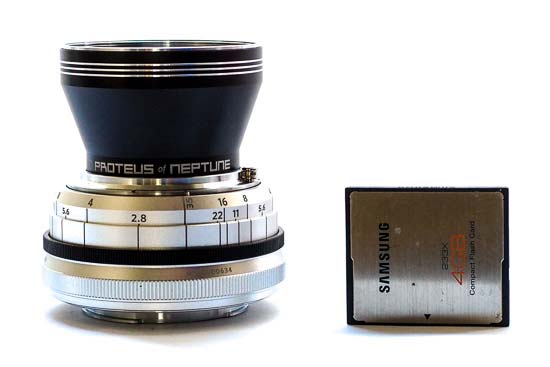 The three focal ranges available in the range are 35mm, 50mm and 80mm. We have been using the lenses on both a Nikon D4S, which is full-frame, and a Nikon D500, which has an APS-C sized sensor. In which case, the equivalent focal lengths are 52.5mm, 75mm and 120mm. The same equivalent focal length will be produced when using the system with Pentax K Mount APS-C cameras, Sony E mount, and Fuji X mount. When using it with Canon APS-C cameras, the focal lengths are 56mm, 80mm and 128mm since the crop factor is slightly different. The angle of view is 63 degrees, 46 degrees and 30 degrees.

Generally speaking, the lens system is not too prone to chromatic aberrations, which are usually characterised as purple or blue fringing along high-contrast edges. It is possible to see it on occasion, but it’s not usually particularly noticeable at normal printing and web sizes.  Sometimes however if you are shooting something of extremely high-contrast - such as directly into the sun - you can see examples of more severe chromatic aberration. The lenses are also prone to quite severe flare when pointed towards the sun - some may find that to be an attractive quality though. 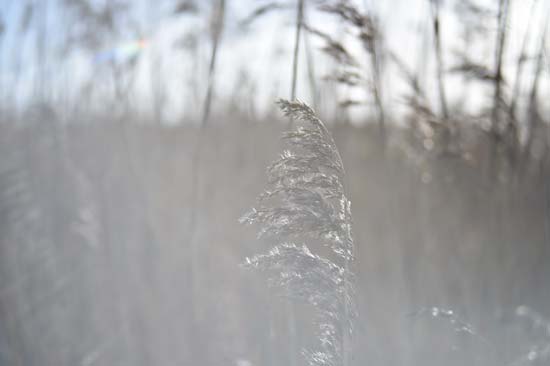 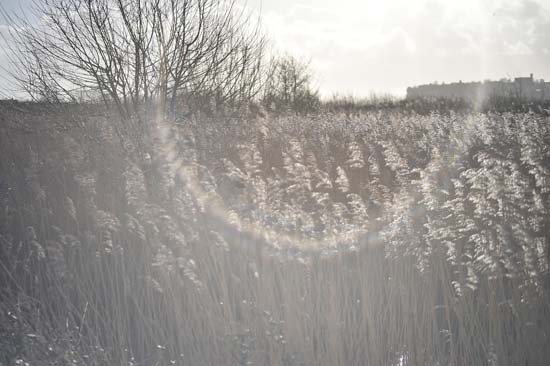 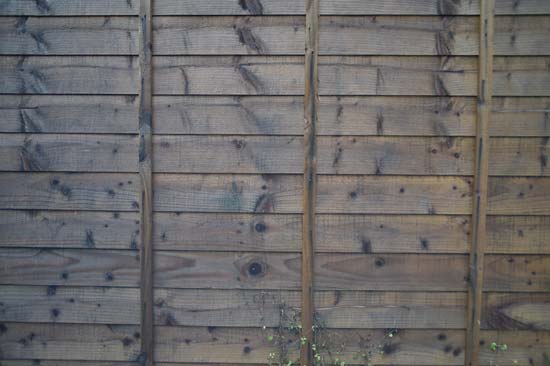 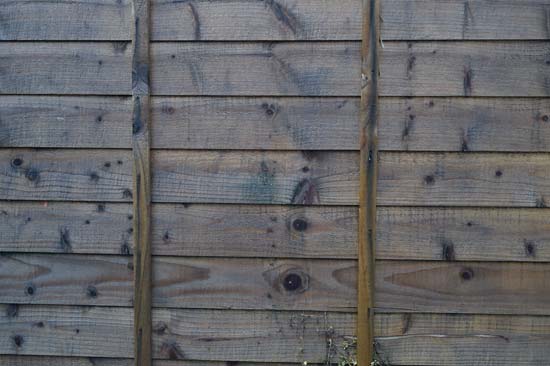 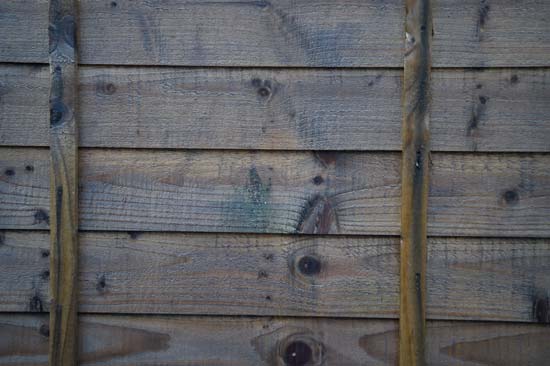 Vignetting is possible to see when shooting a white wall and shooting at the widest possible aperture (which is beyond what is recommended for the 35mm and 80mm lenses). It’s not too obvious when shooting normal subjects, and is less apparent as soon as you start shooting with a narrower aperture. 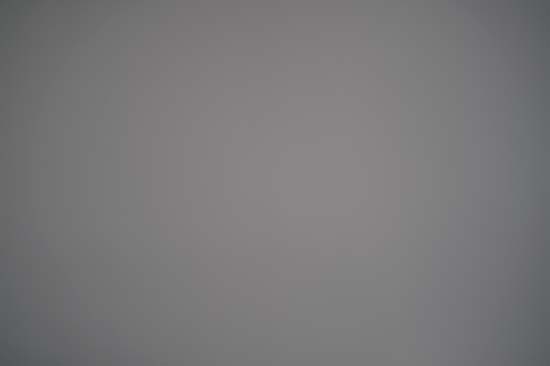 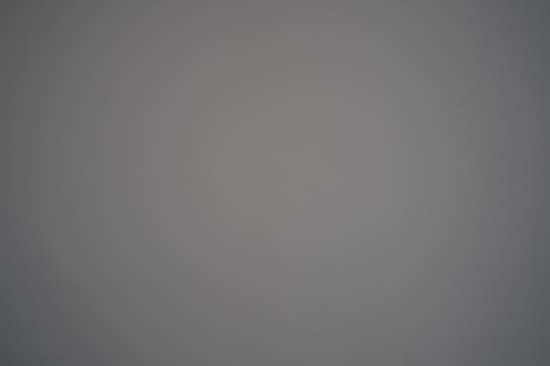 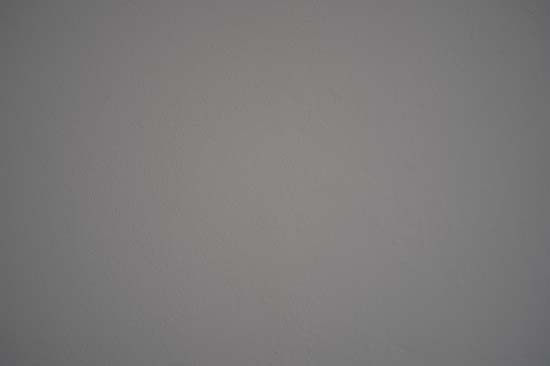 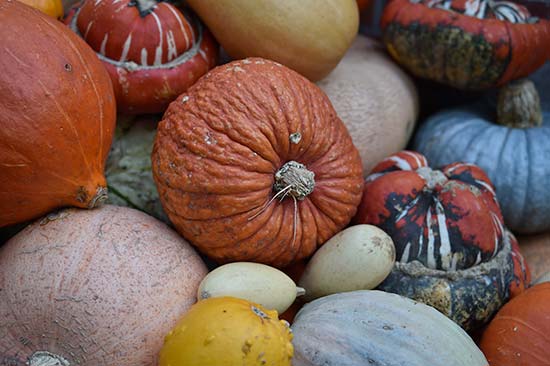 Bokeh is one of the most interesting aspects of this lens system, being as it is possible to alter the shape of it using aperture plates. Without any plates inserted, bokeh is generally creamy and smooth, producing a pleasing look. With the plates inserted, you can create six different types of shape - some examples of which we have included for you to have a look at. Whether you like these unusual shapes is mostly down to personal taste, but they certainly add an interesting element to the shot.