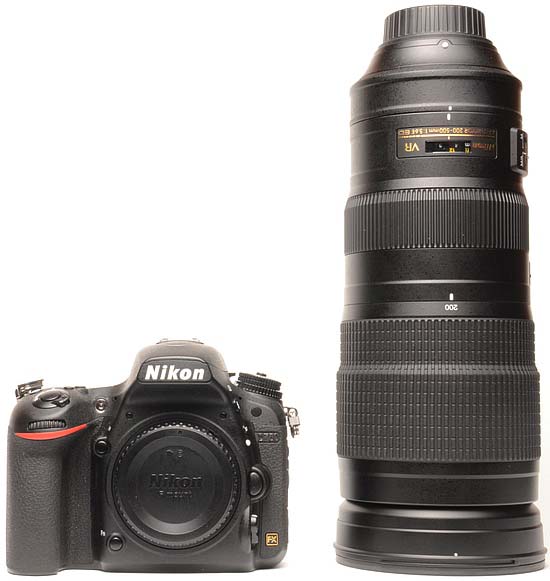 Weighing in at 2,300 grams with the supplied tripod collar (and 2090 grams without), the AF-S Nikkor 200-500mm f/5.6E ED VR from Nikon is a rather heavy lens, although it is still over half a kilogram lighter than the Sigma 150-600mm f/5-6.3 DG OS HSM Sports (which of course spans a considerably wider focal range). This is not a lens that you can hand-hold for too long, being much more at home mounted on a sturdy tripod or monopod. As seen in the photo above, it dwarves even a 35mm full-frame DSLR camera like the Nikon D750. 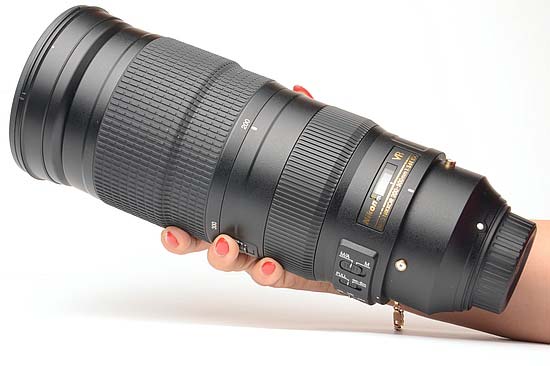 Build quality is very good, if not quite on a par with Nikon's top-of-the-line professional telephoto lenses, which cost several times the price of the AF-S Nikkor 200-500mm f/5.6E ED VR. The outer barrel is made of metal with a high-grade plastic shell, while the inner barrel is made of plastic.

Zooming is not internal – the front extends considerably upon zooming to 500mm. The ribbed zoom ring has a very generous width and a quality feel to it.

The lens has a zoom lock switch that allows you to secure the lens barrel at its minimum length for transport. This is only available at the 200mm setting, and will not prevent zoom creep at other focal lengths. 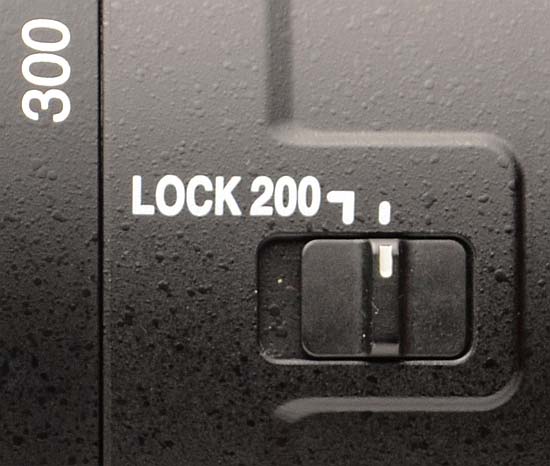 The lens features a distance scale sheltered behind a window.

When it comes to features, the Nikon AF-S 200-500mm lens has a lot to offer. For starters, it comes with a built-in Silent Wave Motor (SWM), which allows for quiet auto focus operation with full-time manual override when the focus mode switch is set to the M/A position. Additionally, the lens has a focus limiter, which enables quick focusing on faraway subjects by restricting focus to distances greater than 6m. The 'VR' abbreviation in the lens' name refers, of course, to Vibration Reduction, which has both a 'Normal' and a 'Sport' mode, which is better suited to unpredictably moving subjects. We've found that VR consistently enabled us to shoot hand-held at an exposure time of 1/100s at the 500mm setting, with shutter speeds as slow as 1/25s also yielding decent results. Last but not least the “E” designation in the product name refers to an electromagnetic diaphragm mechanism, which helps maintain consistent exposure during high-speed burst shooting of fast action. 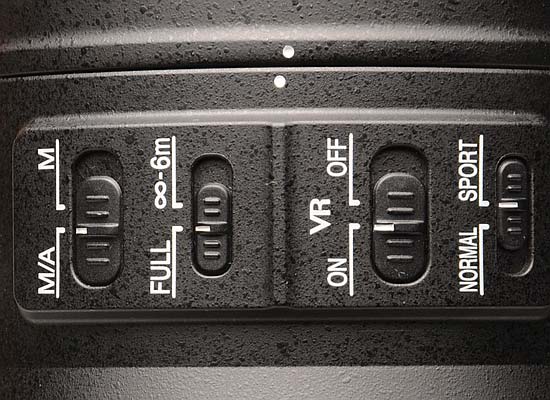 The Nikon AF-S Nikkor 200-500mm f/5.6E ED VR comes with a removable tripod collar. When attached, it allows camera rotation, eliminating the need to tilt the tripod head for switching from landscape to portrait orientation or vice versa. There are markings on the lens barrel to show 90° rotation points. 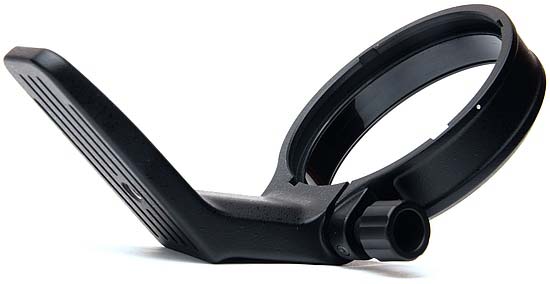 Compared to the 80-400mm Nikkor lens, the 200-500mm's tripod ring has a much better designed, longer and sturdier foot. 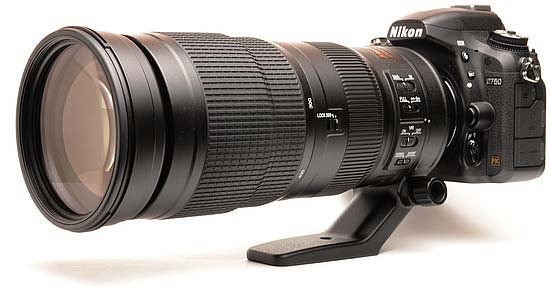 Unsurprisingly for a lens that weighs this much, the Nikon AF-S Nikkor 200-500mm f/5.6E ED VR comes with a solid metal mount. The lens is not claimed to be weatherproof, but there is a rubber seal around the lens mount that should provide basic protection against dust and moisture. 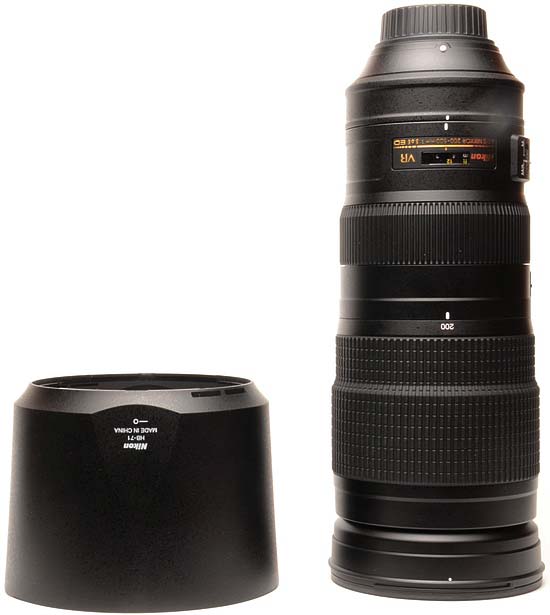 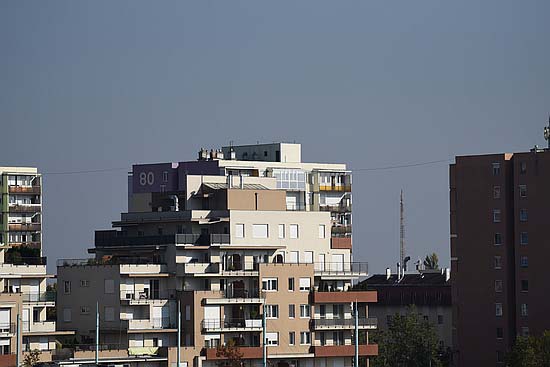 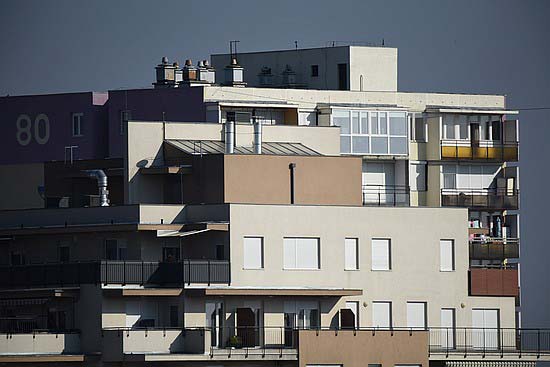 With the lens attached to a Nikon D750, auto-focus is quiet, very accurate and pretty fast  – at least in good light. Unlike zooming, focusing is fully internal, and the front lens element does not rotate on focus, making the use of polarisers that much easier.

As far as manual focusing is concerned, the focus ring is pleasantly wide and has much more “travel” between its close-focus point and infinity than the one on Nikon's 80-400mm lens, making it easier to accurately focus on a subject. The design of the lens allows for full-time manual focus override when the focus mode switch is set to the M/A position.

Chromatic aberrations, typically seen as purple or blue fringes in the peripheral areas of the image, are extremely well controlled with this lens. The 100% crops below give you an idea of what you should expect in the worst case – i.e. essentially zero CA. (The crops are both taken from raw images developed with automatic chromatic aberration removal turned off.) Needless to say we were deeply impressed. 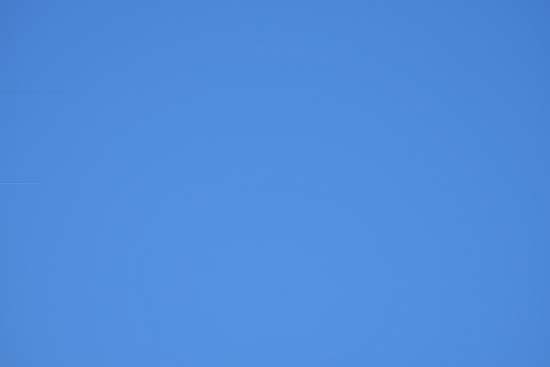 At 200mm f/5.6, there is fairly little light fall-off in the image corners, as seen in the image above. At the long end of the zoom range, this phenomenon is more pronounced. 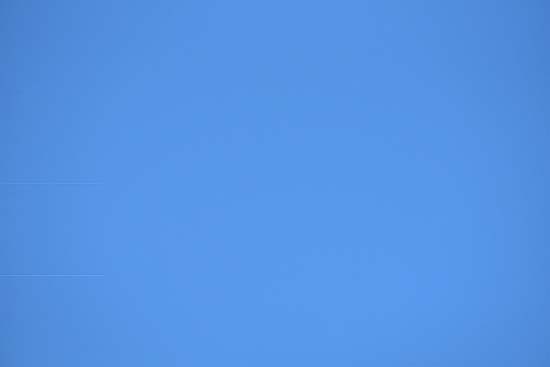 This is not a macro lens. The maximum reproduction ratio of the new Nikon 200-500mm VR is 1:4.5 (1:4.3 according to our own measurements), and the minimum focus distance is 220cm. The example below shows how close you can get to the subject, in this case, a Compact Flash memory card. 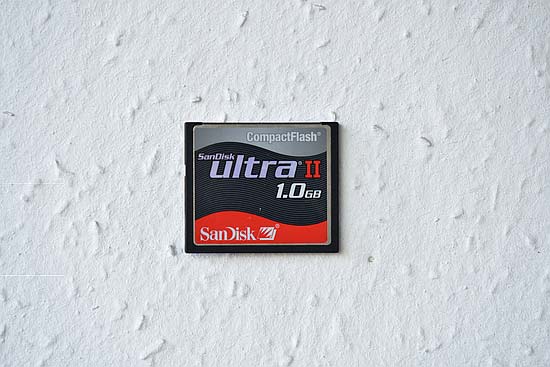 Bokeh is a word used for the out-of-focus areas of a photograph, and is usually described in qualitative terms, such as smooth / creamy / harsh etc. In the AF-S Nikkor 200-500mm f/5.6E ED VR, Nikon employed an iris diaphragm with 9 rounded aperture blades for a pleasing rendition of the out-of-focus areas. In our view, their efforts have been fairly successful – see the examples below.