The Nikon AF-S Nikkor 28-300mm f/3.5-5.6G ED VR is a full-frame superzoom lens for the Nikon F mount. Inspired by the success of the AF-S DX 18-200mm VR among owners of DX bodies, this is Nikon’s first FX lens with a 10.7x zoom range. Packed with Nikon goodies like a Silent Wave Motor (SWM), Vibration Reduction (VR), Super Integrated Coating (SIC) as well as an optical formula that includes two ED and three aspherical lens elements, the Nikon AF-S Nikkor 28-300mm f/3.5-5.6G ED VR currently retails at $949.99 / £739.00 in the USA and the UK, respectively. 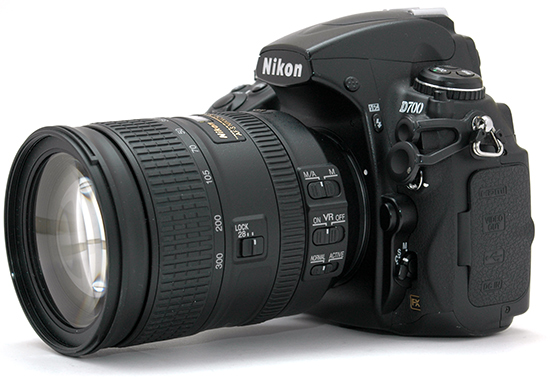 Tipping the scales at nearly 800 grams the AF-S Nikkor 28-300mm f/3.5-5.6G ED VR is more than 40% heavier than the Tamron 28-300mm f3.5-6.3 XR VC travelzoom, but it's still less than half the weight of the monstrous Canon EF 28-300mm f/3.5-5.6L IS USM. Coupled to the Nikon D700, as seen in the photo above, the lens feels solid but a bit heavy to use all day long. On our simple but trusty old Nikon F65 film body, it felt a lot more manageable (although still substantial and definitely front-heavy). Build quality is similar to most Nikon lenses we have tested so far. Most exterior parts are made of plastic, which is a good thing for this lens, as an all-metal construction would probably have made it completely unwieldy. 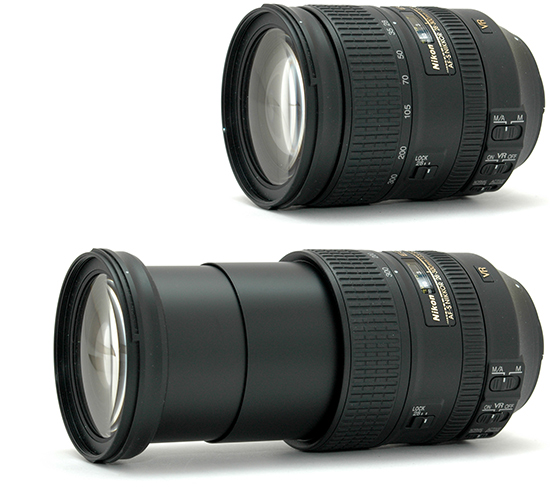 Zooming is not internal – as you can see, the front extends considerably upon zooming to 300mm. The ribbed zoom ring is sufficiently wide and neither too stiff nor too loose. Zoom creep is not an issue. The lens accepts filters via a standard 77mm thread around the – non-rotating – front lens element, which is great news for those who like to use polarisers or ND grads, for example. The Nikon 28-300mm VR ships with the HB-50 bayonet hood, but it wasn't provided for this review. 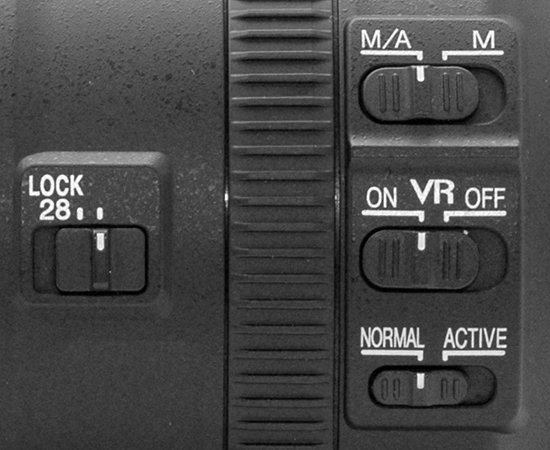 In terms of features, the Nikon 28-300mm VR has quite a lot to offer. It has an internal focus (IF) mechanism and a Silent Wave Motor, allowing you to use manual focus even when you are in auto-focus mode (denoted with the usual M/A sign on the lens barrel). It also features two forms of Vibration Reduction (VR), Normal and Active. Normal VR compensates for quick and small vibrations resulting from shaky hands, but ignores slow and wide movements to allow you to use e.g. the focus-recompose technique or panning. Active VR tries to compensate for every movement, fast and slow, large and small, and is therefore better if you are shooting from e.g. a moving vehicle. The stabilising effect can be seen through the viewfinder in both VR modes. Finally, the switch seen on the left in the photo above allows you to lock the zoom ring at the focal length of 28mm for carrying. Given that the lens isn't prone to zoom creep, there is little actual use for this switch, but Nikon recommends that you use it when carrying the camera anyway.

There is a distance scale sheltered behind a window, but there are no depth-of-field marks. 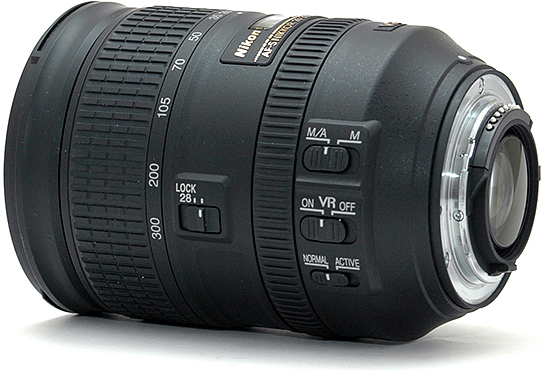 At the 28mm end of the zoom range, the angle of view is 75 degrees. 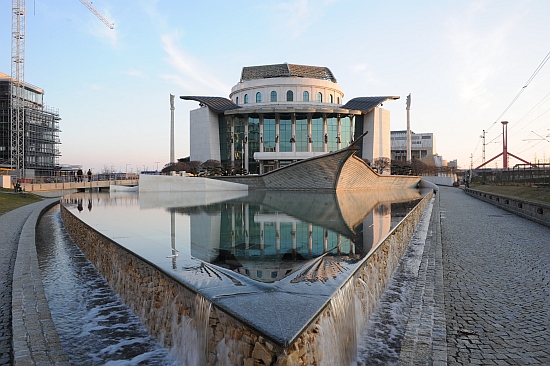 Field of view at 28mm 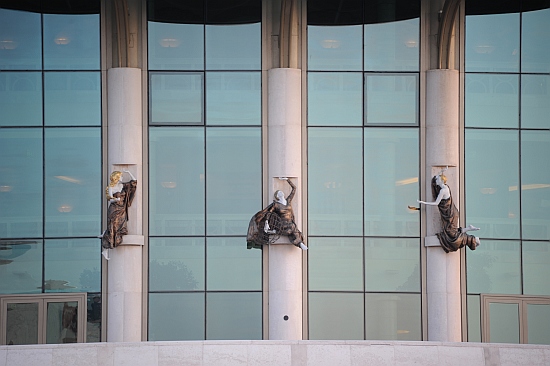 With the lens attached to a D700, auto-focus is generally fast (but not instant). On the F65, focusing worked well in good light, but became quite problematic in normal room lighting. The D700 had no such issues with the lens.

The focus ring, which is close to the rear of the lens, is slim but adequate for the job. It requires a little more than a 90° turn to get from the close-focus point to infinity. Note that there is no hard stop at either end of the range.

Early adopters of this lens reported significant focus breathing, particularly at the 300mm zoom setting, and we have found this to be true. It is a widely known fact that the angle of view of a lens depends not only on the focal length but also on the focus distance set, and this effect is particularly pronounced on the Nikon 28-300, especially at the telephoto end. While at infinity, the angle of view is essentially the same as with any other 300mm lens, there is a marked difference at shorter focus distances. The following shots were taken at a distance of a bit over 1.5m, or 5 feet. The first photo was taken with a Nikon AF Nikkor 70-300mm f/4-5.6G lens at 300mm: 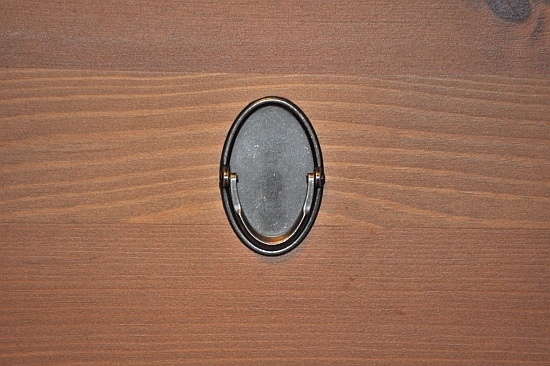 The second image was captured with the 28-300mm lens at the same focal length: 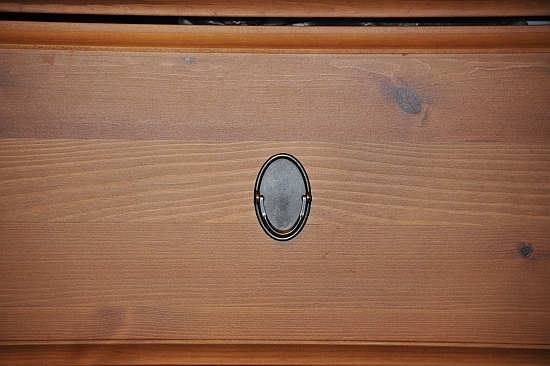 This is a significant difference – focused at 1.5m and zoomed in all the way to 300mm, the Nikon 28-300mm VR has an angle of view similar to that of a 165mm lens (while it works like a “proper” 300mm when focused at infinity). It also displays a significant amount of vignetting and pincushion distortion.

Note however that while the older 70-300mm lens is essentially at its close-focus point here, the 28-300 can focus down to 0.5m; see the heading 'Macro' further down the page.

Chromatic aberrations, typically seen as purple or blue fringes along contrasty edges, can be detected in some of our test shots, but they never really get out of hand, which is a testimony to the quality of the two ED glass elements employed. 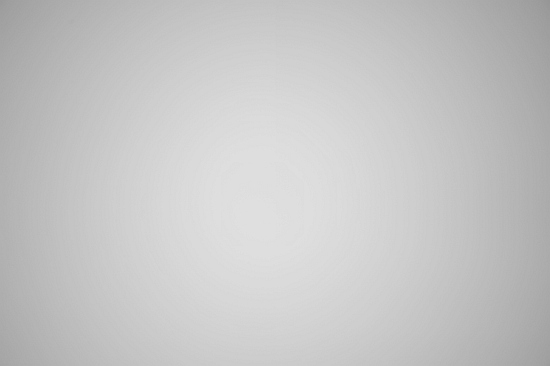 With the lens set to its maximum aperture, you can see some heavy light fall off in the corners at all focal lengths, and especially at 300mm. Stopping down helps a lot here.

The maximum reproduction ratio of the Nikon 28-300mm VR is approximately 1:3, which is quite a good performance from a non-macro lens. The smallest area with which you can fill the frame is 108x72mm when using an FX camera, or about 72x48mm with the lens attached to a DX body. The close-focus point is at 0.5m from the sensor plane, meaning less than 25cm from the front element. 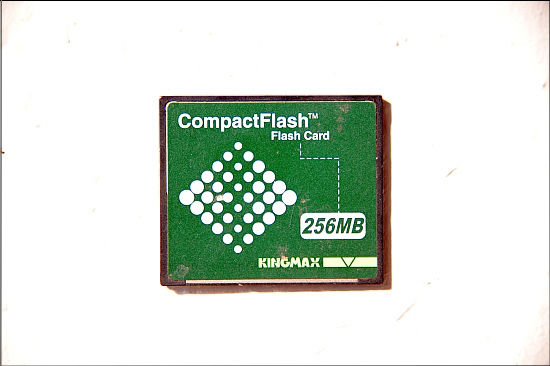 Bokeh is a word used for the out-of-focus areas of a photograph, and is usually described in qualitative terms, such as smooth / creamy / harsh etc. In the AF-S Nikkor 28-300mm f/3.5-5.6G ED VR, Nikon employed an iris diaphragm with 9 rounded blades, which has resulted in a pretty nice bokeh for a zoom lens, at least in our opinion. However, recognising that bokeh evaluation is subjective, we have provided a few examples for your perusal.