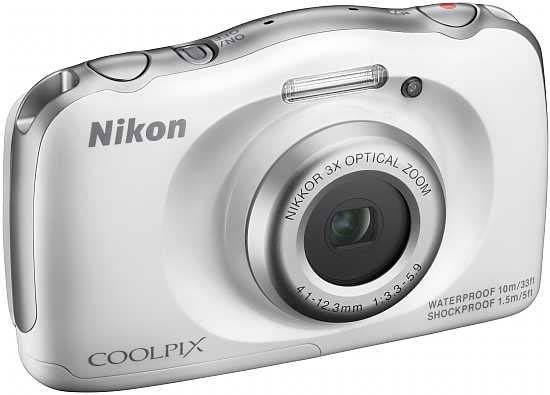 There are times in life when you simply want to kick back, relax and not have to worry about a thing. Holidays are the perfect opportunity and the Nikon Coolpix S33, with its 13 megapixel sensor, tough exterior and easy-to-use menu systems, is an ideal fit. Attractively priced at around £90 / $139, the Nikon Coolpix S33 is available in blue, white, pink and yellow.

Being the obvious successor to the Coolpix S32, it's worth taking a look at the predecessor and seeing where the improvements – if any – have been made. Are they cosmetic? Menu based? Hardware based? Luckily, when we received the S32, it was also the white model and we can see that the band that circles the circumference of the camera is a glossier silver finish on the S33. While this looks nicer, we feel that in difficult lighting conditions, it was easier to see the contrasting white buttons against the darker band on the S32.

There appears to be two main differences in the Nikon Coolpix S33. The focusing system has been upgraded now to include a Targeting AF system which will find the subject with greater precision and success. The other major change is outside the camera. The battery charger has been upgraded from the EH-70P to the EH-71P. This may not sound a lot but it means the charging time has been cut quite substantially from 2h 35m to 1h 40m. Battery life is unchanged as the battery is the same lithium ion EN-EL19 as the S32.

These tough range of cameras have been designed with simplicity in mind. You don't want always be on the go looking for that unique heart stopping image. Nikon have designed the S33 with that in mind. Also, by making it as simple as possible, it's more appealing to children as well as other members of the family who are less technologically savvy.

The Nikon Coolpix S33 is laid out the same way as the S32, but for those of you who aren't acquainted with the predecessor, we'll run through the camera and what the various buttons do. The top plate has three buttons for powering the camera on, taking pictures and recording video. The direct video record button sits on the left shoulder with a red dot so that you can differentiate between that and the identically sized shutter release button on the right shoulder. The power button is a different shape, lights up and is indented so that you don't press it accidentally.

On the back, the amount of buttons has been constricted to reduce the chances of bamboozling the user who doesn't like new technology. The right side of the camera is usually reserved for the bulk of the buttons available for accessing various areas of the camera, but the S33 is bereft by contrast. This is down to the simple-to-use ethic of the design. The right side buttons simply operate the zoom (up and down on the directional pad), and go into the Playback system. The real functional buttons are situated to the left of the screen. There are four to choose from and they closely resemble the buttons found down the side of the screens on the Nikon DSLRs, thanks to their location and shape.

When the Nikon Coolpix S33 is switched on, an option for the corresponding button will appear next to it on the screen for a few moments before it disappears. The top button is for camera operations while the second makes changes to the flash and self-timer. The third button down accesses the various Scene modes that are available on the camera and the fourth is for the Set-up menu system.

The Menu systems are so easy to use that a child can do it and that's entirely the point. The top button, identified by the green camera icon, has little actual function in everyday terms. It simply takes you back into Auto mode after you've been shooting in a Scene mode. The rest of the menus are very easy to work out, simply by looking at them. Usual names of features have actually been changed so that they explain what they do to someone who may not know. For example, under the Change colours option in the Set-up menu, exposure compensation is now simply called Brighter/Darker. Saturation is More vivid/Less vivid. For anyone already accustomed to the way a menu system works, the S33 does it slightly different. Generally, a menu button is pressed, then the navigation pad is used to select the appropriate option within that menu. On the S33, you have to use the left side buttons to make your selection and it can get some getting used to.

The buttons are firm, though and the whole camera seems well made for the price point it's set at. The lens is set inside a waterproof tube for the 3x optical zoom to move backwards and forwards. A fully internal zoom could be used to reduce the bulge at the front of the camera, but that would raise the price and the sub-£100 bracket is one of the things that make this camera so appealing. The only opening on the camera is where the battery and memory card are placed. It has a switch to release the door which is then moved in a different direction to prevent accidental opening while underwater or in sand, for example. The door is lined with orange rubber, which will degrade over time, but in reality, you'll have likely upgraded your camera before that happens, so it isn't worth worrying over.

Start up time varies wildly depending on whether you have the welcome screen enabled on your camera. If so, the start up from pressing the power button to taking a picture can be up to 4.5sec. Turning it off in the Set-up menu will reduce that to a more impressive 1.6sec. There is a continuous shooting mode. In a ten second test period, the camera took 13 images, which averages out at 1.3fps (frames per second). However, it bursts five of those images in the first second, so is technically 5fps.

Playback on the Nikon Coolpix S33 can be accessed via the playback button on the back of the camera. This can be done regardless of whether the camera is on or off. However, when it's powered down, you need to hold the button down until it starts up. The information you're presented with is minimal. The camera will display the options of the side buttons, the battery level and amount of images taken. After a few seconds, all of them will disappear bar the battery level. You can press the buttons on the side to get the options back up. The options are colour coded for easier navigation. The green button is for “Having fun with your pictures”. This entails exchanging messages, Picture play and Grading. In Exchange messages, you can record dialogue to the picture. Picture play allows you to make cosmetic changes to your pictures, such as adding various effects, changing the colours or highlighting colours. Grading allows you to give the pictures certain status as a kind of priority tagging system.

The blue section allows you to view pictures based on the date they were taken. This is useful if you're using a large memory card and have multiple days of photographs on. You can also create a slide-show. The pink section is for deleting pictures and the orange section remains as the Set-up menu, but adds some retouching features such as copying, rotating or resizing pictures. There's still the original Camera settings found in the recording section of the Set-up menu available here.

Alongside the camera, in the box you'll receive a charger and USB cable for the lithium ion battery, a User Manual which is bigger than you need as it's in multiple languages, a wrist strap and a brush for cleaning dirt and sand from the nooks and crannies. For the full user manual and editing software, you need to go to the Nikon website and download them.