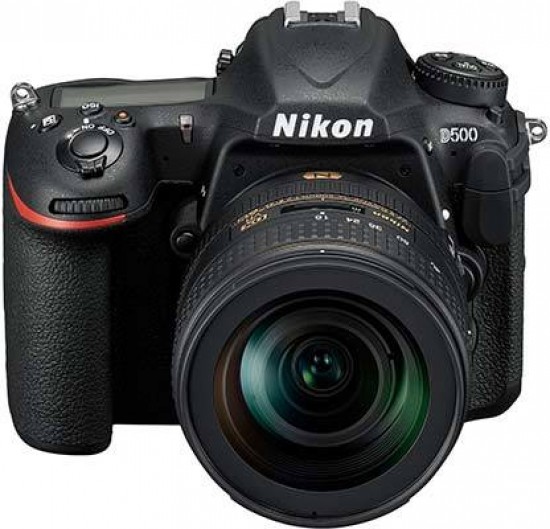 The D500 is Nikon's new flagship DX-format (APS-C) camera. We were waiting a long time for Nikon to produce an update for the D300S, so much so that it has skipped a number and gone straight to D500.

Despite the fact that the D500 is a DX model, it shares a lot in common with the D5 - Nikon's professional, full-frame, (and much more expensive) DSLR. That includes the same processor, focusing system, and interestingly, same number of pixels.

That resolution count is 20.9 million pixels. That's less than we've seen in some of Nikon's other APS-C sensor cameras (the D7200 has a 24 million pixel sensor), but Nikon says that the sensor has been designed to the same specification as the full-frame D5. The D500 has a native ISO range of 100 - 51,200. This year Nikon seems to be all about incredibly high ISO values, and the D500 is no different - the maximum expanded setting is ISO 1,640,000.

The Nikon D500 has an EXPEED 5 sensor which helps to facilitate a fast frame rate of 10fps. It's also possible to record 4K video, which, unlike the D5, can record for the full 29 minutes and 59 seconds. There are 153 AF points, which includes 99 more sensitive cross-type sensors, and 15 sensors which are sensible down to f/8. All of the focus points are sensitive down to -3EV, with the exception of the central sensor, which can go down to -4EV, which should be fantastic news for low light focusing.

The Nikon D500 is a pretty chunky and solidly built camera, which gives it a feeling of high quality construction. There's a large grip which has a protruding section where the shutter release is found, enabling your middle finger to sit comfortably beneath it. There is a rubberised coating around the grip and on the back of the camera which helps it so sit comfortably in your hand. The camera is also fully weather-sealed, which is great news for landscape and outdoor photographers.

There's a large number of direct access buttons, and dials, which is exactly what we'd expect from a camera which is aimed at enthusiast or advanced amateurs. Like the Nikon D5, the screen is also touch sensitive, which can be used for some elements of operation.

On the top left of the Nikon D500 you'll find a rotating dial which can be moved to change the drive mode, including single shooting, quiet mode, continuous and mirror up. You'll need to push down a small button just in front of the dial in order to change it, which prevents you accidentally moving it when you don't want to.

Above this dial you'll find four buttons, which you need to use in conjunction with a scrolling dials found on the front and rear of the grip. There's a button for Image Quality, for Metering Mode, for White Balance and for Exposure Mode. Simply hold down whichever button you need to use, then use the scrolling dial to make changes. You'll see confirmation of the changes being made in the LCD panel on the top of the camera. It's a very quick and intuitive way of making changes, and you can generally swiftly set up the settings you need for the shot.

Like many high-end cameras, the only shooting modes you can use are P (Program) A (Aperture Priority) S (Shutter Priority) M (Manual) - in other words there's no automatic mode.

Just behind the shutter release button there's a button for changing ISO and a button for altering exposure compensation. Again you use this in conjunction with the scrolling wheel on the back of the Nikon D500. Here is also where you'll find a button for video recording, allowing you to start video recording once you're in video shooting mode. Around the shutter release is a switch for turning the camera on or off, and if you move it around on further than the “on” position, you'll also switch on the illumination light for the LCD panel which is useful when you're working in lower light conditions.

Moving to the back of the Nikon D500 and there's a large selection of different buttons here too. To change the AF point, you can use the textured joystick which is easy to reach with your thumb while the camera is held up to your eye. Although there are 153 focus points, only 55 are actually available for your own selection, with the rest of the points acting as support points. Coverage is wide though, covering a very large section of the frame. If you don't want to use the joystick, you can also use the navigational pad just below it. There's a switch around this pad - if you push it to the “L” position, the focus point will be locked and you won't be able to change it. Finally, you can also use the touch-sensitive screen to set the autofocus point if you are shooting in live view, or recording a video.

To the left hand side of the Nikon D500's screen there's the playback button, a delete button, the main menu button, and a variety of buttons which are usually used in playback - such as a magnifying button. There's also an OK button which is used in certain circumstances, such as when you want to confirm that you want to format a memory card. There's also a Fn2 (function) button here which you can customise in the main menu.

On the right hand side of the screen there's an info button, but also an “i” button. The info button can be pressed to display your shooting settings on the main screen, while the “i” button is used as a kind of quick menu, with a few settings that you can quickly access without having to go into the main menu. Just underneath these buttons you'll find the Live View button, which has a switch around it which enables you to switch between stills shooting and video recording.

The screen itself is not only touch sensitive, but it also tilts upwards and downwards. While this isn't quite as useful as a fully articulating screen, it's handy for shooting from either very high or very low angles and so it's great to see it here on an enthusiast level camera.

The Nikon D500 has a 100% field of view optical viewfinder which provides a very bright and clear view of the scene in front of you. There's a rubberised eye cup which helps the camera feel very comfortable against your face. You'll also see that there's a blind which can be activated to block out any light from entering the viewfinder - useful if you're shooting very long exposures on a tripod.

On the front of the camera, surrounding the lens mound, you'll find a customisable Fn1 button, a depth of field preview button, and there's also a switch for moving between autofocus and manual focus. There's a button in the middle of the switch which allows you to choose the type of focus.

A door protecting the memory cards can be found on the right hand side of the camera. The D500 has dual memory card slots, supporting both SD cards and XQD cards. This is good news for those with a stash of SD cards, but if you invest in an XQD card you get faster speeds, so it may be worth it  if you intend to shoot fast moving subjects, such as sport.

The Nikon D500 has Wi-Fi, bluetooth and NFC connectivity which means you can send your images across to a smartphone using Nikon's Snapbridge app. This is currently only available for Android devices, but an iOS app is also being developed for release later this year.

The camera's main menu is divided into different sections, which are quite sensibly arranged and easy to navigate - especially of course if you've used a Nikon menu before. If any of the settings aren't immediately obvious you can press a button on the back of the camera which is marked with a question mark and you should be shown an explanation of what the function does - it's not available on every function though.

Battery life is rated at a very impressive 1240 shots, which is great for an enthusiast level camera - it's unlikely you'll need to invest in a second battery unless you're shooting a lot every single day, or for some reason you can't recharge the battery in between shoots.

Focusing times are very quick in good daylight, dropping a small amount when shooting in lower light. It's only in extremely dark conditions that the Nikon D500 fails to find focus at all. When it comes to continuous focus, the D500 is fantastic at keeping focus when the subject is kept under the active AF point, making it the ideal camera for fast moving subjects such as sport and wildlife - in fact having a crop sensor means that your lenses have a longer reach than they would on a full-frame sensor, which is advantageous when the subject matter is in the distance.

Processing speeds are very good, with a rapid shot-to-shot time and almost instant start-up time. The buffer when shooting at fast continuous speeds is also fantastic, even when shooting in raw format, again making it excellent for sports and action photographers who need to shoot extensive burst depths.