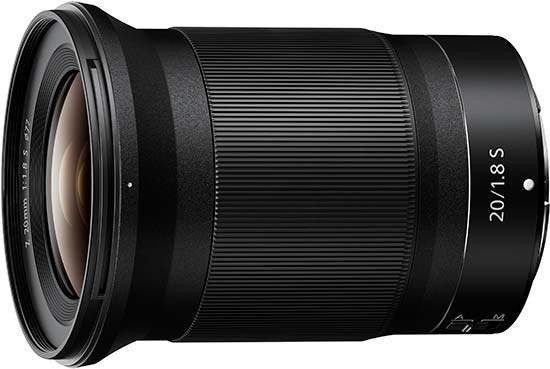 The Nikon Z 20mm f/1.8 S was announced in February 2020. Nikon’s latest fast prime lens for its Z series of mirrorless cameras is its widest yet. The other S series prime lenses in the line up are a 24mm, 35mm, 50mm and 85mm, with others promised to be announced soon. There are also a range of zoom lenses available for Z7 and Z6 cameras.

Other features of the Nikon Z 20mm f/1.8 S lens include weather-sealing, nano crystal coating and a lens design featuring 14 elements in 11 groups, plus a 9-blade aperture.

At the time of writing, the Nikkor Z 20mm f/1.8 S lens retails for £1049 / $1049, making it one of the more expensive of Nikon’s S series prime lenses. It’s likely that the price will drop just as other S series lenses have done over time.

Like all lenses in Nikon’s S line-up, the Nikkor 20mm f/1.8 S has a very simple outward design. Weighing in at 505g, it’s a little heavier than some of the other lenses in the line-up. At 108.5mm long, it’s one of the longer lenses in the range, too. It still manages to balance fairly well on either the Z6 or the Z7 (both cameras use the same body design), but it would probably be a little bit unbalanced if you were to use it on the much smaller Z50.

The metal lens mount of the 20mm lens feels very strong and capable of withstanding repeated motions of attaching and detaching the lens. On the base of the Nikon Z 20mm f/1.8 S is a white dot which you can use to line-up the lens on the camera’s mount. All you need to do is simply twist it in place to secure it.

Just above the white dot is an engraving with 20 / 1.8 S, while just to the side of this you’ll see a switch for choosing between shooting in autofocus (A) or manual focus (M).

The bulk of the exterior of the lens is made up of a manual focusing ring, with ridges to help with grip. There are no hard stops to help you determine whether you’re at the closest focusing distance or infinity focus, which is something it has in common with all of the other S series prime lenses.

On a more positive note, the focusing ring has just the right amount of give to help with manual focusing. On that note, switching on focus peaking to display in the viewfinder or on the screen will help give you a better indication of precisely what is in focus.

If you’re somebody who rarely uses manual focusing, then another option is to set the focusing ring to control a different function, such as aperture or exposure compensation. This is something you can set via the camera’s main menu and can be handy in certain circumstances.

At the front of the Nikon Z 20mm f/1.8 S is another - much smaller - white dot. This is to help you line up the lens hood which comes supplied in the box. It’s a very simple line-up and twist operation, and you can also reverse the lens hood for reducing the size when storing or transporting the lens. The filter thread size is 77mm.

As with the other S range lenses, Nikon promises that the 20mm lens is quick, quiet and accurate. For that reason, the lenses are suitable for a number of different functions, including the ability to shoot discreetly at events and so on. Quiet focusing also makes them a good choice for shooting movies. In real world use, the lens is indeed very quiet, quick and accurate, locking on to the subject with ease.

The Nikon Z 20mm f/1.8 S is a fixed length prime lens which is primarily designed to be used on either the Nikon Z6 or Z7 full-frame cameras. You could also use it on the newer Z50 camera, which has an APS-C sensor and therefore you’d need to apply a 1.5x crop factor. That would leave you with an equivalent focal length of 30mm, which could make it a good “walkaround” lens or for street photography. When using a full-frame camera, the angle of view is 94 degrees, while it is 70 degrees when shooting with an APS-C model.

Normally characterised as blue or purple fringing along high-contrast edges, chromatic aberration is not normally a problem for high-cost lenses. As such, it’s not something we’d expect to be a problem with the Nikkor Z 20mm f/1.8 S lens, and indeed in examining images it’s been very hard to find many, if any, examples of problematic aberrations.

There is some noticeable shading in the corners of the image when shooting a subject like a white wall at the very widest aperture of f/1.8. It’s not something you’re likely to notice quite so much when shooting normal subjects. The effect is lessened when shooting at f/2.0, and again at f/2.8, with it being almost completely gone by the time you get to f/4.0.

With a very wide-angle lens like the Nikon Z 20mm f/1.8 S, we might expect to see some distortion when shooting very close to a subject, but otherwise images appear impressively undistorted.

The Nikkor Z 20mm f/1.8 S is not a designated macro lens. It’s unlikely you’d use it often for close-up shots of typical macro subjects, such as flowers or leaves, but it does create quite an interesting effect if you choose to do so. With that in mind, the minimum focusing distance is quite close, at 0.2 metres, with a maximum reproduction ratio of 0.19x.

With its maximum aperture of f/1.8 and a lens construction which features 9 rounded diaphragm blades, we’d expect the bokeh from the Nikon Z 20mm f/1.8 S lens to be quite attractive, which is borne out in real world shooting. We can see that the lens is capable of producing some lovely out of focus areas, with light circles particularly well rendered. How attractive or pleasing you find bokeh to be is something which is relatively subjective, such we’ve included some sample images below to help you judge for yourself.