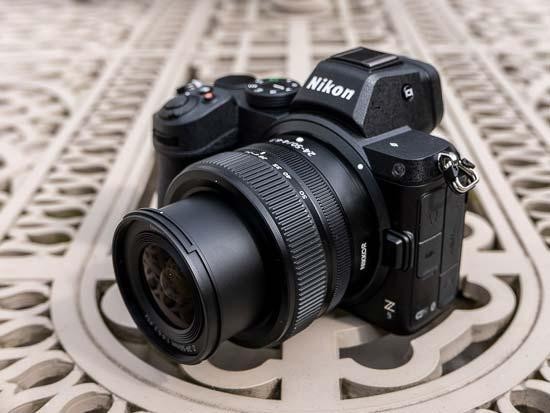 The Nikon Z 24-50mm f/4-6.3 features a button-free retractable design that is extended simply by rotating the zoom ring.

A customisable control ring adjusts the manual focus by default, but can be changed to control either aperture or exposure compensation.

Optically the lens is comprised of 11 elements in 10 groups, including 2 ED elements and 3 aspherical elements, and it has 7 rounded diaphragm blades.

A stepping motor provides smooth and quiet auto-focus, and it has a minimum focus distance of 35cm and maximum reproduction ratio of 0.17x.

Tipping the scales at exactly 195g / 6.9oz, the Nikon Z 24-50mm f/4-6.3 is one of the lightest 35mm full-frame lens that Nikon produces, and certainly the lightest lens for the Z-series of mirrorless cameras.

Coupled with the Nikon Z5 camera, as seen in the photos below, the lens feels very well-balanced.

The lens feels solid enough in your hand, even though the outer barrel, the lens mount and the 52mm filter thread are all made of plastic.

The focusing ring is just about wide enough, ridged and rubberised.

The Z 24-50mm f/4-6.3 is the latest retractable lens from Nikon, which makes it easier to store and carry than standard lenses.

The internal barrel extends when zoomed out to 24mm, before retracting to its shortest position at 35mm, then extending again when zoomed to 50mm.

If the lens is locked when you turn on the camera, a message is displayed - "Before taking photos, rotate the zoom ring to extend the lens" (on the Z5 camera that we tested the lens with).

The front of the lens does not rotate on focus, which is good news for those who use polarisers or ND grads on a regular basis.

Nearest the lens mount is the custom control dial. By default you can use it as a manual focusing ring, but if you prefer you can change it to control aperture or exposure compensation in the main menu of the camera.

The Nikon Z 24-50mm f/4-6.3 lens features a stepping motor that allows near-silent auto-focusing. In use, we found the focusing to be very quiet and pretty quick - but certainly not instantaneous - when mounted on a Nikon Z5 body.

The lens mount is made of hard plastic rather than metal.

The lens is dust- and moisture-resistant, although it doesn't quite match the fully weather-sealed nature of the Z5 camera.

At the 24mm end of the zoom range, the lens has a diagonal angle of view of 84°.

At the 50mm end of the zoom range, the lens has a diagonal angle of view of 47°.

Lateral chromatic aberrations, typically seen as blue or purple fringes along contrasty edges, and longitudinal chromatic aberrations, which is green fringing evident in blurred backgrounds and magenta fringes sometimes appearing in out-of-focus foregrounds, are both well-controlled with this lens - the example below shows the worst-case scenario.

With the Nikon Z 24-50mm f/4-6.3 lens wide open, you can see some heavy light fall-off in the corners and along the frame edges. Stopping down helps, although to completely get rid of this phenomenon, you will need to use an f-stop of f/8 or smaller.

There's also some obvious barrel distortion at 24mm and mild pincushioning at 50mm, pretty much what you'd expect from an inexpensive kit zoom.

The Nikon Z 24-50mm f/4-6.3 is capable of producing quite nice sunstars when stopped-down to f/16 or f/22, as shown below, although the lack of a lens lens-hood means that flare does occur when shooting directly into the sun.

The Nikon Z 24-50mm f/4-6.3 is certainly not a macro lens. The closest focusing distance is 0.35 m (1.15 ft), and Nikon quotes a maximum magnification of just 0.17x when set to the 50mm focal length. The following example illustrates how close you can get to the subject.

Nikon have employed an iris diaphragm with 7 rounded blades for a pleasing rendering of the out-of-focus highlights.

Based on what we have seen, we can say that they largely succeeded. Below you'll find some examples, but you are also encouraged to check out our sample images.