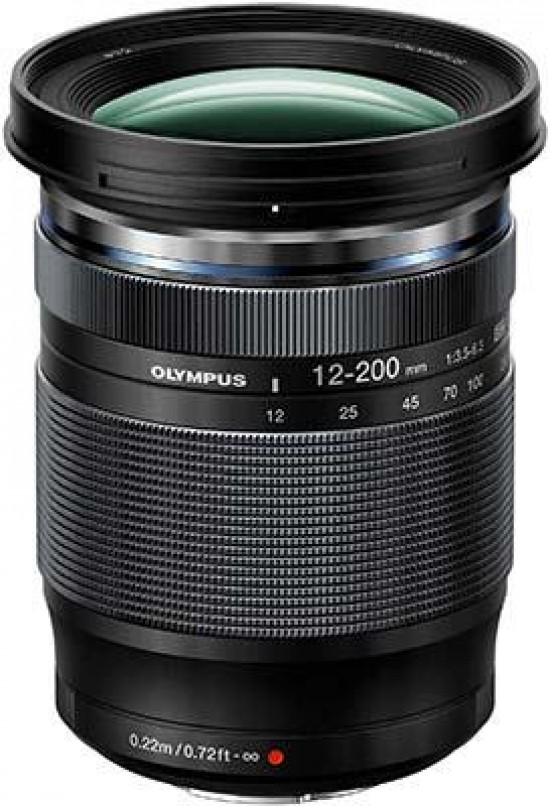 Want one lens to leave attached to your Olympus camera that will be fit for most, if not all, shooting scenarios?

A super telephoto lens – starting out at a wide angle 24mm equivalent in 35mm terms, and going all the way up to an equivalent of 400mm at the maximum zoon end – there’s no denying that when twinned with a Four Thirds sensor, the Olympus M.Zuiko ED 12-200mm F3.5-6.3 zoom (16.7x) should prove creatively versatile.

On paper at least the wide angle offered should make it a decent option for landscapes and street photography, as well as portraiture and travel shoots.

Indeed, back when it was first announced in spring 2019, this £800 lens was boldly pitched as the most powerful zoom to date for mirrorless system cameras.

Like the premium OM-D bodies it’s primarily been designed to be twinned with (it will also fit the PEN range, naturally), the Olympus M.Zuiko ED 12-200mm F3.5-6.3 zoom is dust proof, splash proof and water proof, so there’s a degree of peace of mind built in, in that the 12-200mm can be stashed in a camera bag to be brought out on any occasion, and in all weathers.

It should probably go without saying by now, but, because of the unique properties of Olympus’ system, it’s also much more compact and lightweight than a DSLR lens of equivalent range would be.

That said, in being a jack-of-all-trades option, our immediate assumption is that this lens’s trade off for compositional versatility could be lens clarity.

Not so, claims its manufacturer, noting that attention has been given to the use of special lens coating to reduce flare and ghosting, as well as Super ED and apsherical lenses utilised in its construction to suppress chromatic aberration and distortion.

With high resolution video also an integral feature of the latest generation of cameras, unsurprisingly the Olympus M.Zuiko ED 12-200mm F3.5-6.3's creative flexibility extends to being a tool for recording the moving image, not just stills, its ‘MSC’ (Movie and Stills Compatible) inner focus mechanism giving rise to a swift AF performance; auto focus response seemingly being the main battleground for manufacturers of late.

The Olympus M.Zuiko ED 12-200mm F3.5-6.3 could be viewed as a less costly and cumbersome alternative (at a manageable weight of 455g) to otherwise investing in a handful of prime lenses in order to mirror the various focal lengths on offer here. 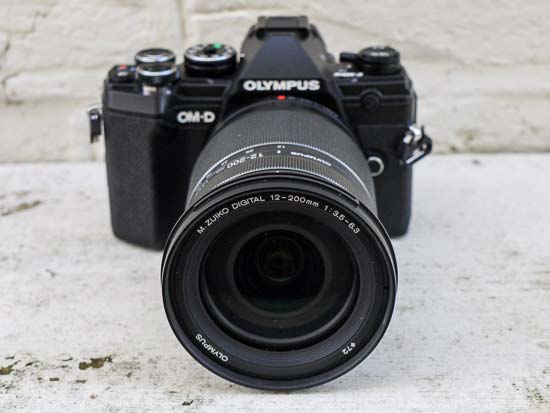 As we’ve inferred in our intro, if you’re heading off on your travels, or even just a day’s sightseeing, and only want to leave the one lens bolted to the front of your mirrorless OM-D camera, the Olympus M.Zuiko ED 12-200mm F3.5-6.3 would suggest a sensible and capable option for the Olympus enthusiast to go for.

Feeling reassuringly weighty in the palm – reassuring, in that its solidity helps it to feel worth the money invested – the weather sealed zoom adds a degree of heft to the OM-D E-M5 Mark III body we were sent along with it.

Fortunately, said heft doesn’t match the potentially back breaking bulk of a weather sealed DSLR and equivalent lens – and we never felt the Olympus set-up was putting a strain on our back or shoulders. 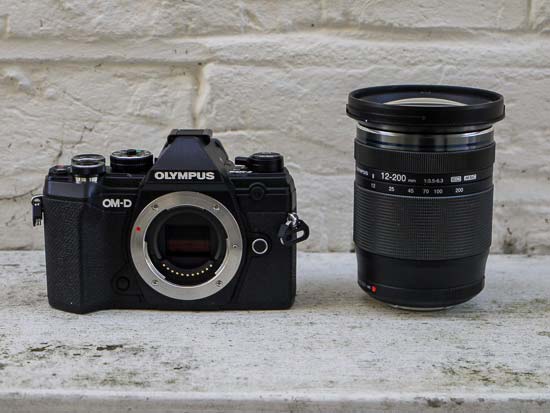 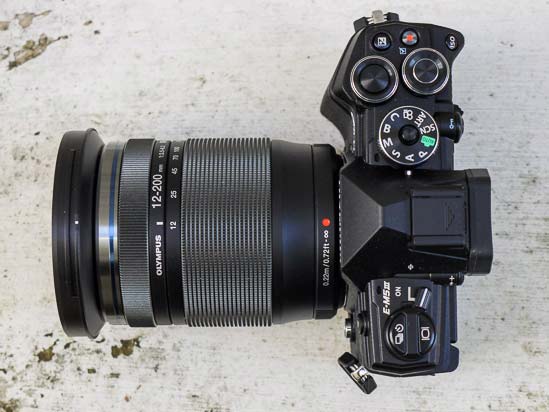 Indeed, we weren’t actually thinking about the camera and lens at all, but rather potential subjects – which is exactly as it should be in terms of portability and use.

Unsurprisingly, the chief operational features of the Olympus M.Zuiko ED 12-200mm F3.5-6.3 lens include a wide zoom ring with a roughened surface to aid grip and prevent slippage. Give this a twist and we see that, when fully extended to maximum 400mm equivalent telephoto setting, the lens’s ‘dormant’ physical length practically doubles.

We also get a much narrower manual focus ring towards its business end, which has a ridged edge to aid purchase and distinguish it from the thicker, rougher zoom ring. 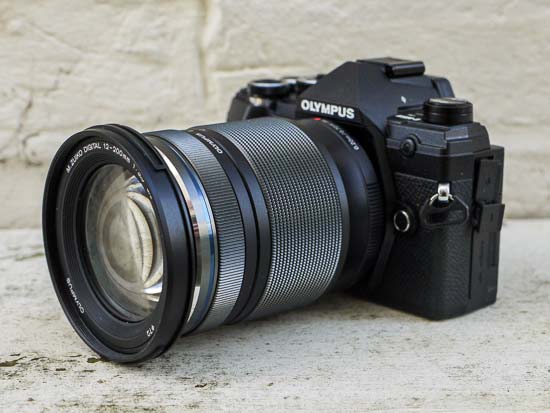 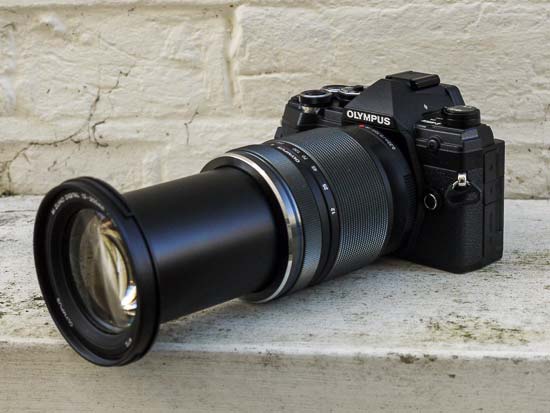 We found the differences in surfaces proved useful when you’re grappling around with an eye glued to the camera’s electronic viewfinder. The ‘action’ of the Olympus M.Zuiko ED 12-200mm F3.5-6.3 lens itself feels sure and steady as you twist the lens ring.

So far, so good… what our review sample was missing, however, was a lens hood. That proved a shame as despite Olympus’ best attempts, we did experience a handful of instances of lens flare, particularly in harsh, low winter sun.

Fortunately a replacement lens hood is, however, available as an optional extra – a ‘snip’ at £60. A soft lens case and a protective lens filter are also optional extras, though we do at least get a standard clip-on lens cap to protect the front glass when transporting the 12-200mm. 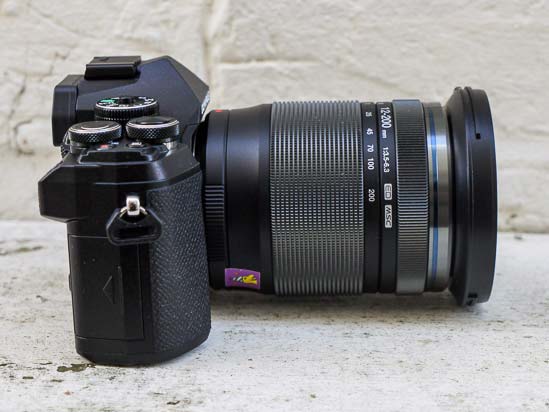 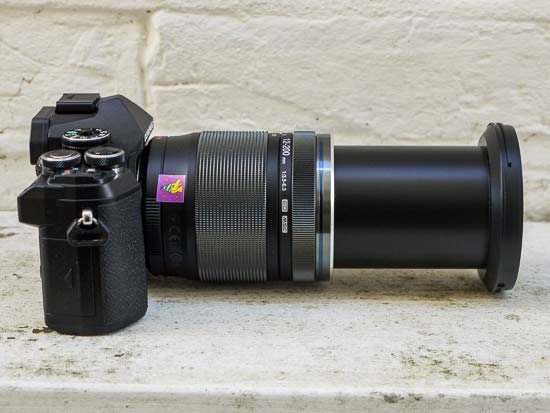 In practical terms, it proves useful that this lens’ shortest working distance is 10cm from a subject, and even can still shoot as close as 50cm at maximum unfurled telephoto setting, as our ‘sharpness’ section test shots reveal.

In terms of overall ease of use, it’s also worth reiterating how compact and portable the Olympus M.Zuiko ED 12-200mm F3.5-6.3 lens is, given it has a 400mm equivalent reach at the telephoto end. It doesn’t feel like the ‘big’ lens that equivalent focal length options are typically described as.

With our right hand gripping our E-M5 Mark III review unit and our left hand cradling the lens itself, the set up of camera body and lens combined also feels nice and balanced. 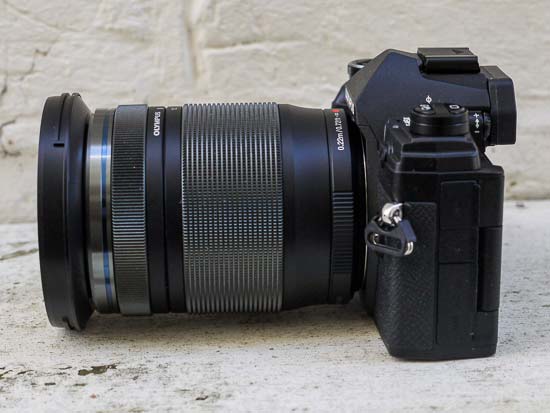 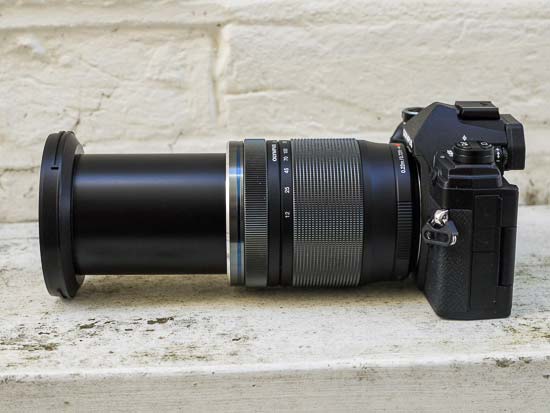 While there are no stepped focal length markings on the Olympus M.Zuiko ED 12-200mm F3.5-6.3 lens barrel that reveal themselves only as the lens is extended – say, as with certain bridge cameras or super zooms – we instead get them nestled between the zoom ring and the focus ring on the lens barrel.

The printed markings give us an indication of how to arrive at 12mm, 25mm, 45mm, 70mm, 100mm and 200mm focal lengths. As the lens is designed to be smooth and silent in operation, obviously there’s no click or bite point as you turn the zoom ring to arrive at each, so it’s a case of keeping watch as you zoom in if there is a focal length setting you specifically want to arrive at. 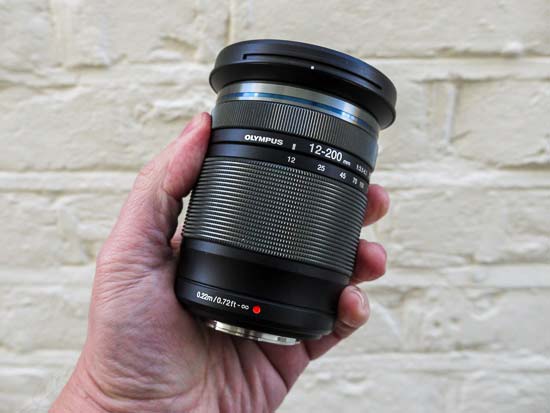 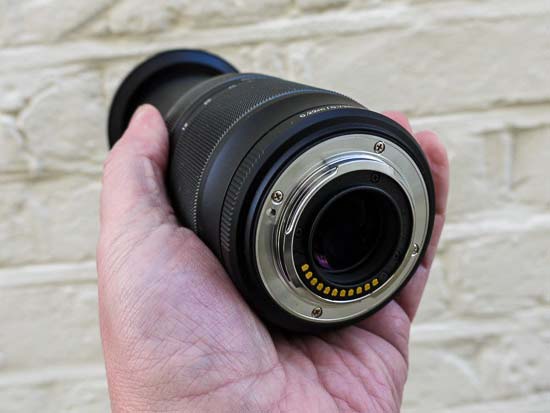 There’s likewise no manually adjustable aperture ring provided on the lens barrel here, but maximum aperture is the stated f/3.5 at its widest setting – so it’s not the fastest/brightest lens on offer. But, given the broad focal range here, it’s a pretty reasonable trade off.

As noted in our intro, a chief selling point of this lens will be the fact that its focal length of 12-200mm provides the 35mm equivalent of a much larger 24-400mm lens when attached to one of Olympus Four Thirds sensor incorporating cameras bearing a Micro Four Thirds lens mount.

Such a broad focal range means that it can handle an equally broad range of subjects, from expansive landscapes to close up portraiture with attractively defocused backgrounds.

If it’s a lot of versatility from just a single lens you require – for example if you’re looking for one lens to pretty much leave on your camera – then the Olympus M.Zuiko ED 12-200mm F3.5-6.3 should tick a lot of boxes for the photo hobbyist. 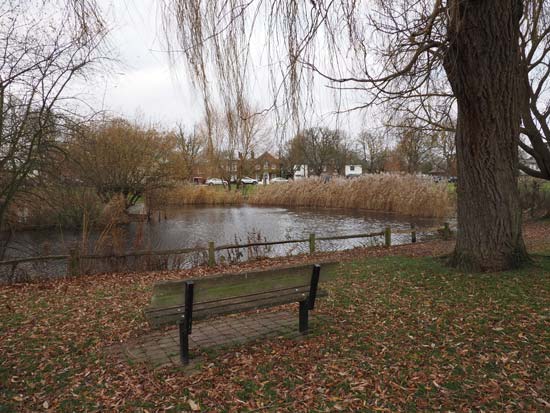 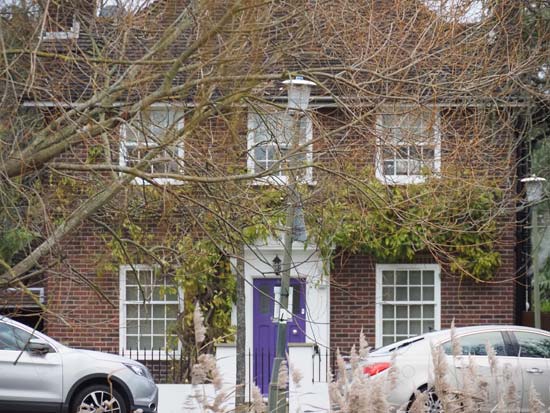 We get a pretty clean bill of health from the Olympus M.Zuiko ED 12-200mm F3.5-6.3 in this regard. Any otherwise annoying artifacts, such as purple or blue lines around the contrast-y edges of objects – typically where the subject, such as the branches of a tree – meet the sky are well controlled by this combination of lens and camera body. Performance is fairly good overall then.

Unless you’re shooting up close to a subject with the Olympus M.Zuiko ED 12-200mm F3.5-6.3 lens at its widest setting – whereby any barrel distortion is, still, fairly minimal – you’ll get bright, natural looking results out of the combination of camera sensor and this lens. There is very little notable vignetting, if any at all from this Olympus. 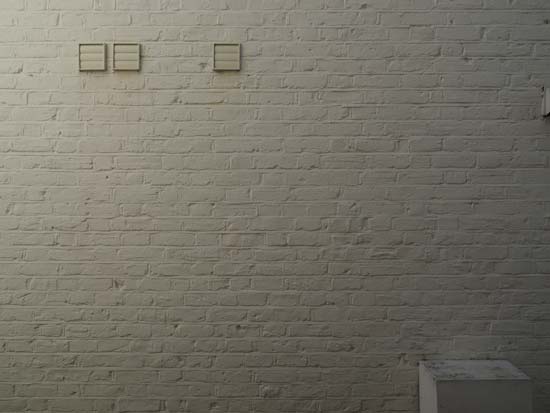 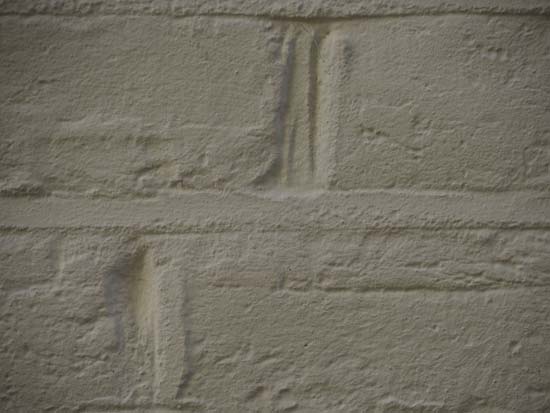 While it’s obviously not a dedicated macro lens, as noted in our intro, the Olympus M.Zuiko ED 12-200mm F3.5-6.3 can shoot subjects as close as 10cm at its widest setting and 50cm at the telephoto end of the zoom, making it a true all rounder, as we have noted. So yes, we were able to achieve close up shots here without having to swap out the lens in use. 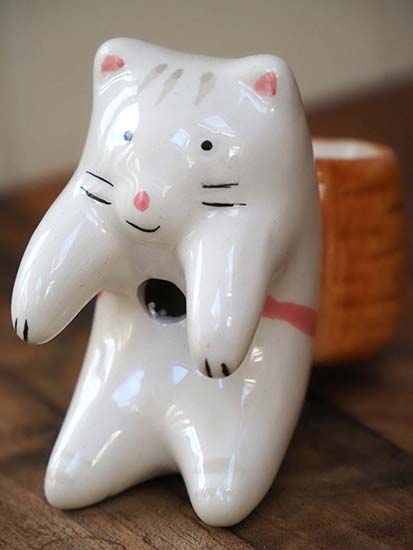 With ‘bokeh’ commonly used to describe attractively and intentionally soft, out-of-focus areas of an image, most commonly using terms including smooth or ‘creamy’, the Olympus M.Zuiko ED 12-200mm F3.5-6.3 lens is certainly capable of delivering some beautifully defocused backgrounds, especially when using the telephoto end of the lens for close up portraits. As we have noted, it’s versatile and can deliver pleasing results across a wide variety of shooting conditions and subject matter. 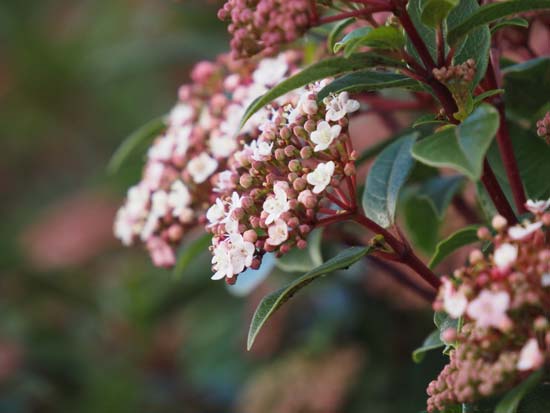 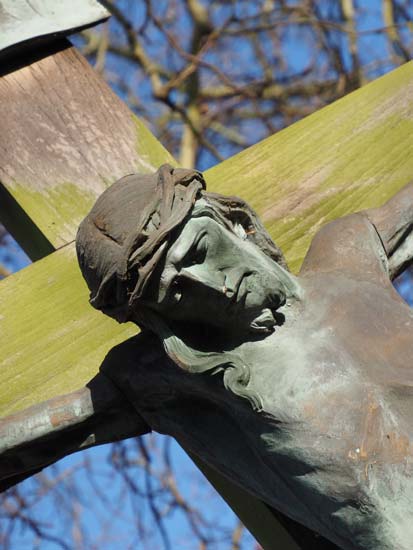 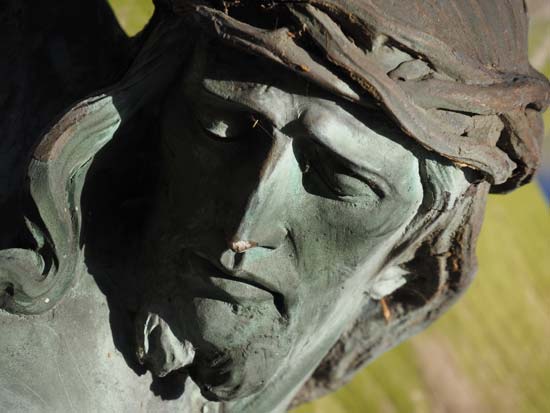 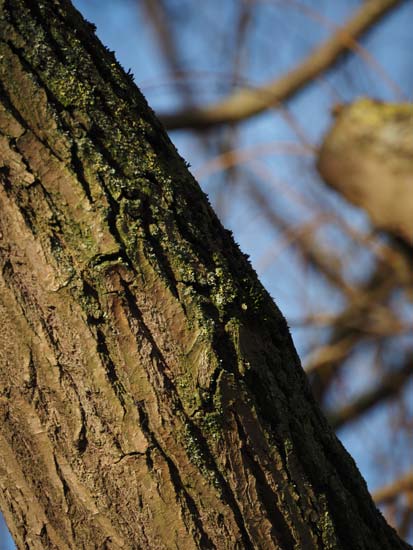 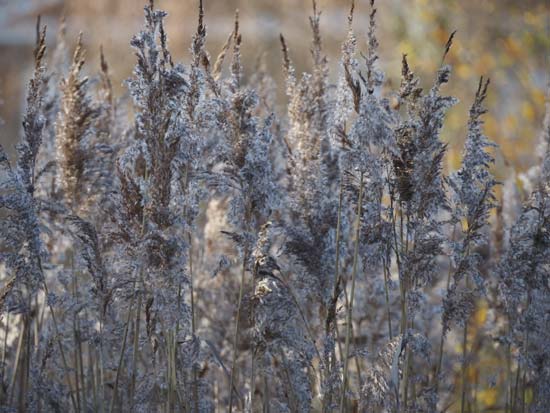 In terms of sharpness, again the combination of the Olympus M.Zuiko ED 12-200mm F3.5-6.3 lens and Four Thirds system sensor is capable of delivering some commendably detailed results - at both ends of the zoom, if results do soften slightly (but not distressingly so) at maximum telephoto.

We also tried shooting at the different focal lengths marked on the lens barrel itself – namely 12mm, 25mm, 45mm, 70mm, 100mm and 200mm and comparing them.

Again, in conclusion when it comes to sharpness this seems like a capable lens delivering a respectable outcome across a wide range of subject matter. To let you draw your own conclusions we’re providing a selection of 100% crops on the pages that follow...