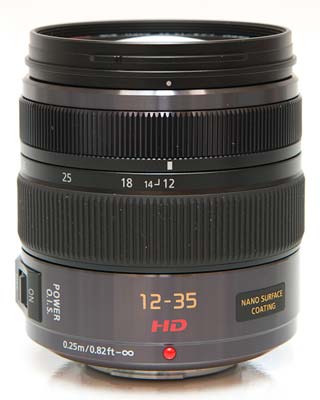 The LUMIX G VARIO 12-35mm F2.8 ASPH is relatively small and light for a fast zoom lens covering a 35mm equivalent focal range of 24-70mm. Zoomed out to the 70mm setting, it measures just over 10cms in length. An extra 3cms is taken up by the supplied lens hood, which helps prevent lens flare and also protects the protruding front element from scratches and finger marks. 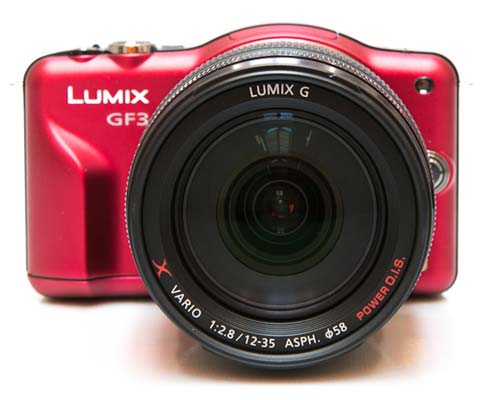 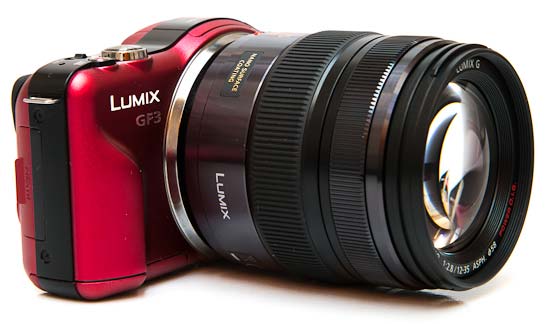 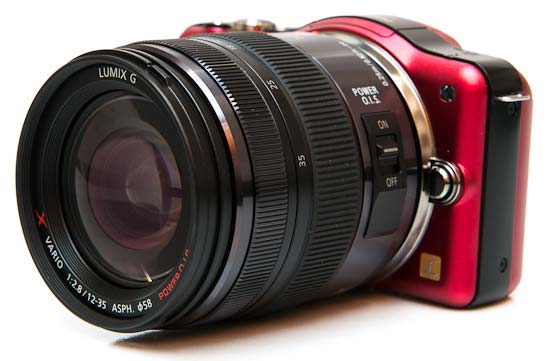 Alongside the Panasonic Lumix DMC-GF3

Zooming is external, so the front does extend, from 8cms at 24mm to 10cms at 70mm. It's quite light at 305 grams, despite its high-quality construction which gives it a premium look and feel. 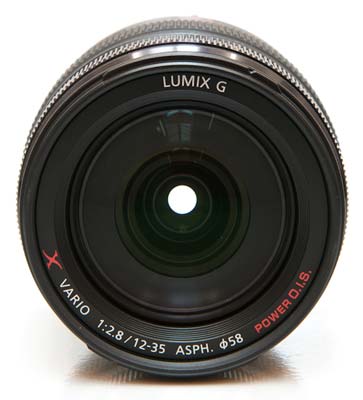 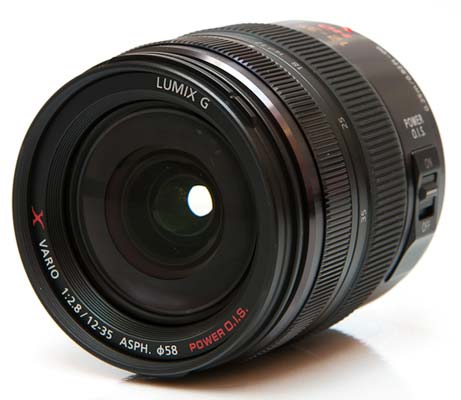 In terms of features, the lens has little to offer (aside from its fast aperture, of course). There is no distance scale and no focus limiter, although there is a handy image stabilisation switch for the Power O.I.S system which helps to combat camera shake.

The LUMIX G VARIO 12-35mm F2.8 ASPH lens is predominantly made of metal parts, including the barrel and the mount, which makes this the best constructed Panasonic lens to date. Panasonic claims some degree of weather resistance for this lens (splash/dust proof), and indeed you can see a rubber seal around the lens mount. 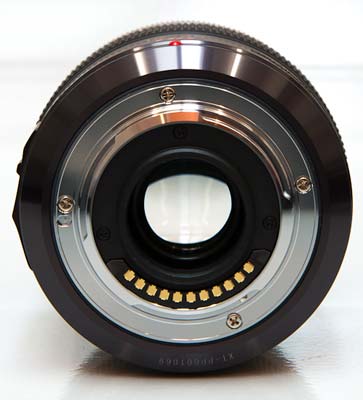 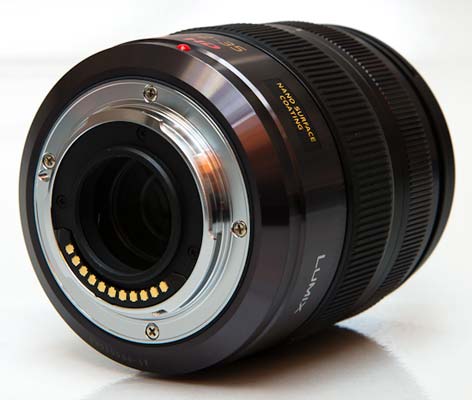 The lens comes with a premium lens pouch and a petal-shaped lens hood in the box. You can fit 58mm filters to this lens at the same time as using the hood. 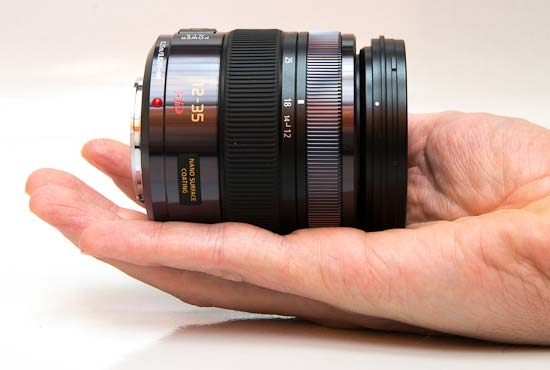 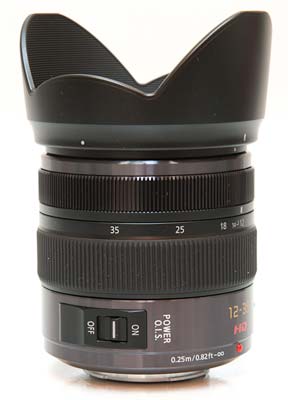 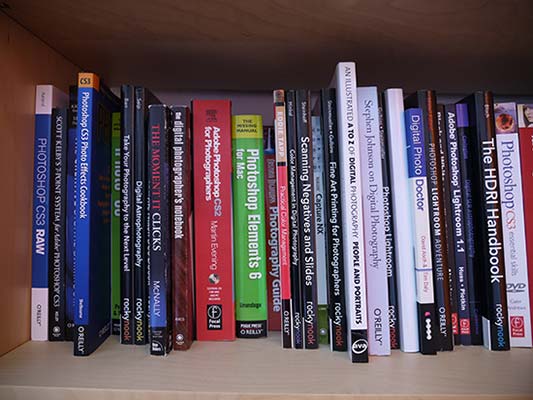 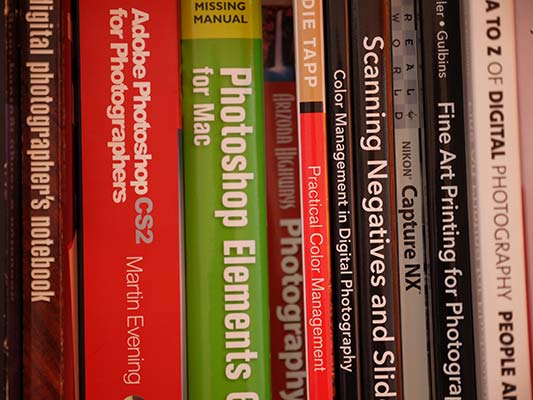 The LUMIX G VARIO 12-35mm F2.8 ASPH lens offers virtually silent focusing thanks to the inclusion of a stepping motor. In use, we found the system surprisingly quick on the DMC-G3 that we tested the lens with. The lens also incorporates an inner focus system, good news for filter users, as it means that it doesn't rotate in use. This combination of silent, quick focusing makes the lens well suited to shooting both stills and video.

Chromatic aberrations, typically seen as purple or blue fringes along contrasty edges, are not really a problem with this lens at either end of the focal range.

With the lens set to its maximum aperture, you can see some light fall-off in the corners at both 24mm and 70mm, but nothing too excessive. You will likely only notice this when photographing a subject with large homogeneous surfaces. 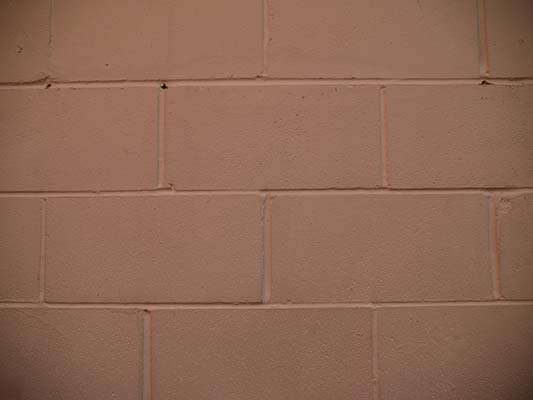 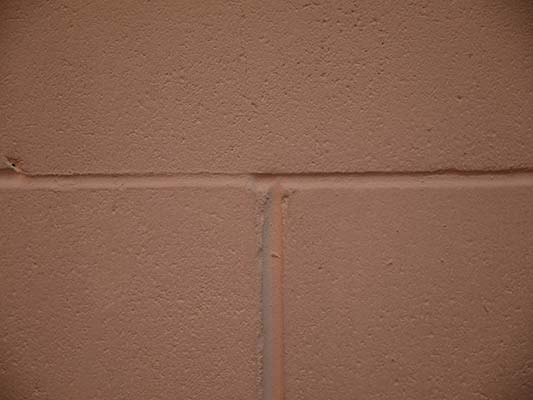 The LUMIX G VARIO 12-35mm F2.8 ASPH has a closest focusing distance of 25cm / 0.8ft at all focal lengths and a maximum 0.17x magnification rating, so it's no macro lens, although that's not surprising for a standard zoom lens. 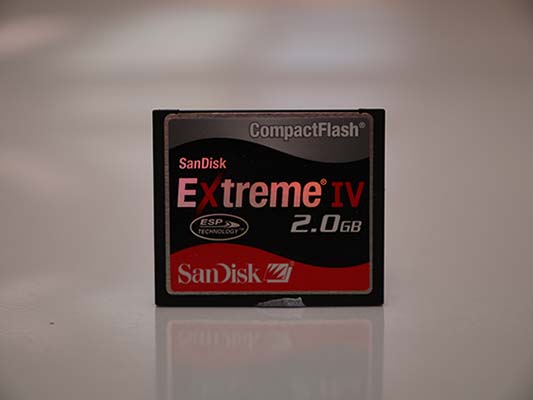 Bokeh is a word used for the out-of-focus areas of a photograph, and is usually described in qualitative terms, such as smooth / creamy / harsh etc. In the LUMIX G VARIO 12-35mm F2.8 ASPH lens, Panasonic have employed an iris diaphragm with seven rounded blades, which has resulted in nice bokeh in our view. We do realise, however, that bokeh evaluation is subjective; so we've included several 100% crops for your perusal.