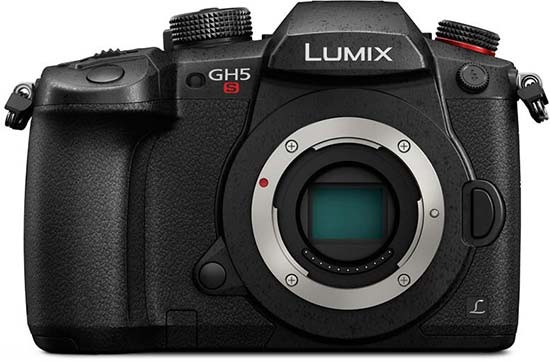 The Panasonic Lumix GH5S is a new flagship compact system camera aimed at professional videographers. It has a new 10.2-megapixel Digital Live MOS Sensor, Venus Engine and Dual Native ISO technology, which combined together make it the most capable low-light Micro Four Thirds camera currently on the market. The GH5S is also the world’s first mirrorless camera to offer Cinema 4K recording at 60p/50p video recording in Cinema 4K (4096x2160), can shoot Full 1080 HD slow-motion video at 240fps, and ships with V-Log L Gamma pre-installed on the camera. Stills photographers will be interested to learn the the GH5S can record 14-bit raw files, the first time for any Panasonic compact system camera, while it also boasts a true Multi Aspect Ratio sensor which doesn't change the angle of view of the attached lens. The Panasonic Lumix GH5S is available now in black and retails for £2199 / $2499 body only.

Measuring 138.5 x 98.1 x 87.4 mm and weighing 580g body only, the Panasonic Lumix GH5S is the same size as the GH5 model that it now sits alongside at the top of Panasonic's mirrorless camera range (along with the recently released Lumix G9 camera), but it weighs in at 65g less. In fact, the two cameras are virtually identical in appearance, apart from the subtle red ring that surrounds the GH5S' shooting mode dial and its new bright red movie record button.

So if you're already a GH4/5 user who's upgrading to or adding the GH5S, you'll feel instantly at home using this new camera. It also means that means that if you have already invested in Panasonic or third-party accessories for your GH5, such as the BGGH5 battery grip, you should be able to seamlessly use them with the GH5S too. If you've never used a GH5 before, then please read our in-depth Panasonic GH5 review first, as we're going to be concentrating on the differences between the two models here, rather than repeating what we said about the GH5.

For stills photographers, the new sensor inside the GH5S brings three main benefits. Firstly, it's the first ever Panasonic mirrorless camera to be able to record 14-bit Raw files, which offers a little more dynamic range than the 12-bit files that the G9 and GH5 produce. Secondly, the GH5S has a true Multi-aspect Ratio sensor, much like the one on the LX100 compact camera, so that you can record both stills and video in the 4:3, 3:2, 16:9, or 1:1 formats without affecting the angle of view.

Thirdly, while some will lament the reduction in resolution to 10 megapixels, the resulting larger 1.96x pixel size has turned the GH5S into a low-light monster, with an extensive ISO range that's simply amazing for a Micro Four Thirds camera. If you typically shoot for publication on social media, or don't make prints larger than A4 at 300dpi, then the GH5S still offers enough resolution for your needs, with the main added benefit of really good low-light performance.

Furthermore, Panasonic have added the innovative Dual Native ISO Technology, as previously seen on the Panasonic EVA 1 professional Super35 4K cine camera. This effectively offers two base ISOs of 400 and 2500, which you can choose to manually switch between, or let the camera decide when to do so. This system helps to ensure that images taken at ISO 800 and above have much less background noise than on a more conventional camera like the 20 megapixel GH5. Finally, the GH5S can focus in lower light than the GH5, down to -5EV from the GH5's -4EV, which rounds out its credentials as a great camera for low-light shooting for stills or video.

Talking of video, the new GH5S goes one step further than the GH5 by being able to record Cinematic 4K movies at 60fps, the first mirrorless camera to do so. Whereas the GH5 can record in C4K at 24fps, the new GH5S can additionally do so at 25, 30, 50 and 60fps. There's also a new 240fps full HD slow-motion mode on the GH5S, up from 180fps on the GH5. The GH5S comes with V-Log L already installed in-camera, something that is an optional paid extra on the GH5, and this profile can be used for both video and still photos. Finally, the GH5S provides Timecode IN/OUT compatibility via the flash sync port, with a BNC conversion cable supplied in the box.

One minor improvement on the Panasonic GH5S compared to the GH5 is a slightly longer battery life of 440 shots, up from 410 on the older model, but we doubt you'd notice on a day-to-day basis. Similarly, the EVF on the GH5S now has a refresh rate of 120fps versus 60fps on the GH5, which again you may not spot.

The Panasonic GH5S has sacrificed a couple of key features compared to the GH5 which could be deal-breakers for for quite a lot of people. First up is the 6K Photo mode, as unlike the GH5, the GH5S doesn't have an electronic first curtain shutter, and the new 10 megapixel sensor doesn't actually have enough megapixels to create 6K video (18mp are required).

Perhaps more importantly, the new GH5S does not feature built-in image stabilisation, unlike every other Panasonic mirrorless camera that has been released. Panasonic have responded to feedback from some professional users who complained that the IBIS system in the GH5 produced jittery video footage in certain situations, such as filming in rough off-road conditions, and consequently they've taken the somewhat brave decision to fix the GH5S' sensor in place inside the camera, rather than employing the same floating design as found inside the GH5.

This then either requires very steady hands to obtain smooth footage, reliance on the few Panasonic lenses that have built-in stabilisation, or far more likely the use of a gimbal to help stabilise the camera during shooting. While some users already did this with the GH5/4 anyway, there are a lot of would-be purchasers for whom this decision alone will push them towards the GH5, or an alternative low-light video camera such as the Sony A7S II.