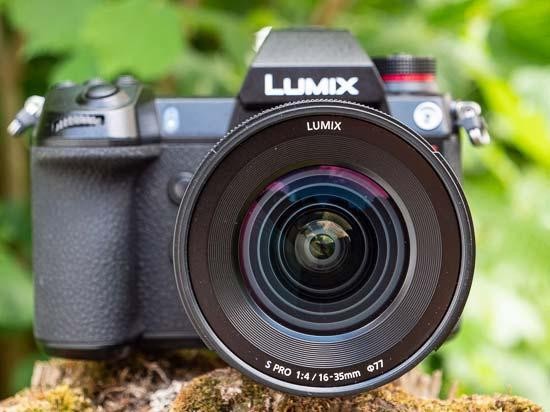 Its focal range caters for a number of purposes and as the widest angle lens currently available in Panasonic's range, it appears to be the best proprietary option for landscape photographers and close-to-the-action scenarios. Its 35mm end also makes for a handy portrait lens where you would like to include some of the surrounding environment.

Wearing Panasonic's red 'PRO' label, the 16-35mm is a proper lens,built to withstand hard environments and promises to deliver Leica-approved image quality. It also packs features such as fast and silent autofocus and a mechanism that suppresses focus breathing, so it should satisfy video users too.

All of Panasonic's L-Mount lenses are built to a high standard, with minimal variance in design. When you've used one, you'll be right at home with the look, feel and function of the others. In fact, the exterior design of the 16-35mm PRO lens is essentially identical to the 24-70mm f/2.8 PRO lens.

You've got a solid metal lens barrel that is dust and splash resistant and can be used in temperatures down to a (claimed) -10°C. We've used the lens in mild UK weather during lockdown and it has been out in rain showers, where we had no concerns.

In balance with the Panasonic S1R camera that we used for this test, we have really appreciated the size and weight of the lens. It's 500g and measures almost exactly 100mm in length. Compared to 16-35mm F4 lenses from other brands, Panasonic's is the smallest and lightest.

Like most other ultra-wide angle F4 zoom lenses, the barrel is on the slightly fatter side and takes screw on lens filters via its 77mm thread. It extends and retracts a little as you go through the different focal lengths, but only up to an additional 10mm at the widest focal length.

There is not a single switch on the lens barrel. So, where you might expect a MF/ AF switch for focusing modes, there is in fact a lovely focus clutch. With the focusing ring at the front end of the lens, it's a breeze to pull the focus clutch back and switch between focus modes - you won't even need to take your eye away from the viewfinder.

In addition to checking the manual focus distances that are clearly marked on the focus clutch, the same information can be viewed on screen, with the focus distance appearing by default as you make changes. If you use the screen to check those distances, you also get an indication of the focus range of that distance in context of the particular aperture in use. All of Panasonic's S-series cameras offer focus peaking as an additional manual focus aid.

The minimum focus distance of 0.25m is what we would expect of a lens like this and is consistent throughout the entire zoom range. That means the maximum magnification of 0.23x is available at the 35mm focal length. This is not a lens designed with macro shots in mind.

Focus breathing (where composition changes when the focus range shifts) is suppressed, which is especially good news for those shooting video. We ran a check on this with the camera and lens mounted to a tripod, manually focusing the entire focus range. There is still focus breathing, but it is very well controlled.

Again, another switch you won't find on the barrel is for image stabilisation because the lens doesn't have it and instead relies on the camera's in-body-image stabilisation. That's no bad thing because Panasonic S1 cameras feature excellent stabilisation - in the case of this review up to 5.5-stops when used with the Lumix S PRO 16-35mm F4 lens.

Five key focal lengths are marked on the zoom ring and a rotation of around 100° is required to shift the lens between its wide and telephoto settings. You'll need a couple of goes to move all the way around.

The zoom ring is beautifully dampened, enabling smooth zooms. By default, the focal length is displayed on screen down to the nearest 1mm while any changes are made, so precise adjustments are a doddle.

Like the zoom ring, the focusing ring offers good resistance, making tiny focus changes possible and fast transitions smooth. Both ridged rings feel great in the hand and seem durable. Although on the small side, they are in good proportion for a lens of this size.

When used with the S1R for photography, the autofocus of the Panasonic Lumix S PRO 16-35mm F4 lens is wonderfully rapid, plus it's silent. AF speed is less of a concern for landscape photographers, but this lens would be a dream for closeup action photography.

It's perhaps for video where autofocusing impresses further. Video AF in Panasonic cameras is geared differently than for photography, prioritising smooth focus transitions over rapid ones. As such autofocus transitions are barely noticeable, being smooth as silk without dawdling. We didn't experience much focus hunting either.

We've mentioned it before in other L-Mount lens reviews, but the provided lens cap and lens hood lock on securely and are removed easily. Don't take this for granted with all lens brands. A soft protective case is supplied with the lens.

From solid build quality to easy handling (not least of which the manual focus clutch) and impressive focusing performance, the Panasonic Lumix S PRO 16-35mm F4 lens ticks all the boxes.

We have had to push the Panasonic Lumix S PRO 16-35mm F4 lens to its absolute limit to find chromatic aberration (CA). But where there is a will there is a way! Unedited raw images included here have all lens corrections turned off to ensure any lens distortions are present.

To really push the lens we ventured into a forest during an overcast day, where we could ensure high-contrast detail in the branches of a tree against the sky. Using the widest 16mm focal length and maximum F4 aperture, we have found blue fringing mainly towards the corners of a picture. In the same forest scene, CA is reduced by closing the aperture to f/5.6 and pretty much gone by f/8. The same aberrations were present in the matching JPEG images.

There is also very good control over fringing in bokeh (out-of-focus) areas. Overall, the S 16-35mm F4 PRO lens has very good control over chromatic aberrations (CA). Any fringing we found was easily corrected in basic editing software such as Adobe Lightroom CC, though we would recommend RAW capture when pushing the lens to its limits.

Light fall-off, also know as vignetting, is the difference in brightness between the centre and the edges an image. In our unedited RAW images with no lens correction applied, a little light fall off can be seen at the maximum F4 aperture.

If shooting videos in the standard 16:9 aspect ratio, then light fall-off is virtually non-visible at 16mm at any aperture due to the crop of the aspect ratio. However, you'll see light fall off at 35mm F4.

Light fall-off can be corrected post capture for photos. Corrections to Panasonic lenses are applied automatically in software such as Adobe Lightroom CC with no dedicated profiles. You'll need to manually override the corrections if further changes are desired.

The supplied lens hood protects the Panasonic Lumix S PRO 16-35mm F4 somewhat from flare, although it's not that big a lens hood. Flare is very well controlled, although there are instances of ghosting, so you'll need to take care when shooting towards sunlight.

Like with almost any lens, sunstars look their best with the lens set closely to its minimum aperture, which here is f/16. At the minimum aperture of f/22, diffraction softens the overall image quality and therefore compromises the crisp detail ideal for sunstars.

Honestly, sunstars are OK, but we have seen better in other wide-angle zoom lenses (not L-Mount lenses, though). The centre is a little mushy and the rays do not extend very far.

Macro photography is not a reason to buy the Panasonic Lumix S PRO 16-35mm F4 lens. The very same can be said for most like-for-like lenses. Here, we have a minimum focus distance of 0.25m and a maximum magnification of 0.23x at the telephoto end.

This uncropped image show how close you can get to a CF card.

Pleasing bokeh (describing the quality of out-of-focus areas) is not necessarily on the top of the want list for an ultra-wide angle F4 zoom lens. That said, with nine aperture blades and that maximum aperture of F4 available across the entire focal length range, we have been pleased by the bokeh quality from the Panasonic Lumix S PRO 16-35mm F4. For example, we shot some portraits at the 35mm focal length with F4 aperture, and there is a pleasant rounded bokeh, plus there's not too much warping of bokeh in the corners of a picture. You'll start to notice those aperture blades from f/8.