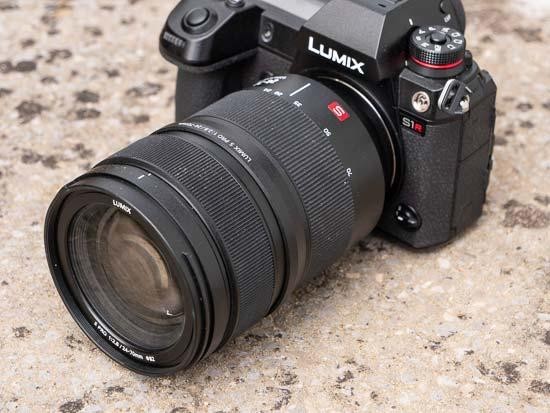 For this test, the Panasonic Lumix S PRO 24-70mm F2.8 lens was attached to a Panasonic S1R body, which was in turn mounted to a sturdy tripod. Exposure delay mode was activated and image stabilisation turned off. Tonal and colour variance across the crops are due to change in natural light during the session.

The full frame at 24mm

Panasonic includes an Ultra-High Refractive (UHR) lens that is claimed to achieve uniform image quality from the centre to the edges of the frame.

The maximum aperture is a constant f/2.8 throughout the entire zoom range. Whatever focal length in play, the sweet spot of the lens is generally between f/4 and up to f/11, where detail is sharpest across the entire frame.

At the wider end - 24mm to 35mm - it's less likely that your subjects will be at a equal distance from the camera, so softer detail at f/2.8 and f/4 for example, is a depth of field issue over true sharpness potential. Where subjects in the corner are in the plane of sharp focus, take a closeup portrait photo at 70mm, detail is sharp all the way from centre to corners even at f/2.8.

Overall detail is slightly softer at f/2.8 over f/4 to f/11, but not by much. At f/16, detail is softer than at f/2.8 and f/22 diffraction renders detail softer still and we'd avoid using this lens setting.

If using for landscape photos where depth of field is a concern, we'd push the lens to f/13 but feel that overall sharpness drops enough at f/16 to think twice about using this aperture.

Conversely, we'd be happy to use f/2.8 to obtain a shallow depth of field while knowing that in-focus detail is sharp. Unsurprisingly, f/4 through to f/11 is tack sharp overall.