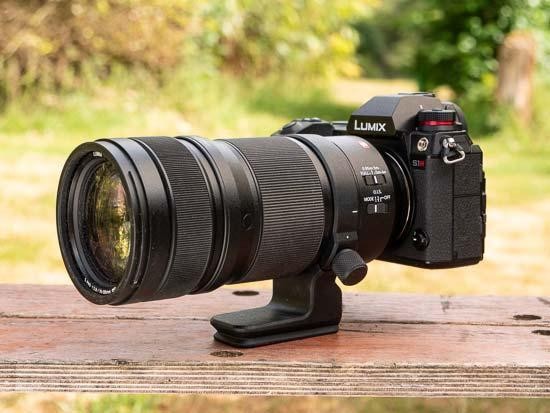 There is already a 70-200mm f/4 lens in the range, but this latest offering features a faster constant maximum f/2.8 aperture. It is, therefore, a significantly heavier and larger lens, but it is part of the holy trinity of f/2.8 zoom lenses widely adopted by professional image makers. Elsewhere, the only other real option for L-Mount is the Leica 90-280mm f/2.8-4 lens,

This versatile fast aperture telephoto zoom lens looks like the most complex and serious bit of glass in the L-Mount range. It is significant in that it opens the Panasonic S Series door to those photographers that shoot portraits, weddings and moderate distance action who are unlikely to be put off by its serious £2,599 / $2599 price tag.

Brace yourself, the Panasonic Lumix S PRO 70-200mm F2.8 O.I.S. is a weighty lens. That 1570g additional weight on an already sizeable Lumix S1 camera tugs at your forearm. It's also slightly on the 'fatter' side, with a maximum diameter of 94.4mm.

Yet with a length of 208.6mm that does not extend at all when shifting between the zoom settings, it's no longer than other 70-200mm f/2.8s. Overall, we estimate Panasonic's 70-200mm is about 5% bigger and heavier.

This is a workhorse lens and you can appreciate straight away that it is up to the task. The metal lens barrel is dust and splash resistant and can be used in temperatures down to a (claimed) -10°C, like other L-Mount lenses. This lens will take a beating - we'd hope for and expect nothing less at this level.

Just like Panasonic's 24-70mm f/2.8 lens, this lens thread takes 82mm filters. Such continuities are appreciated, given these two lenses are highly likely to sit alongside each other in a pro's camera bag. You won't need to duplicate lens filters or fiddle with stepping rings.

Overall, the design is consistent with other L-Mount lenses; that solid metal body, ridged zoom and focusing rings, plus a staff favourite - the lovely focus clutch (more on this later).

But the Lumix S PRO 70-200mm F2.8 O.I.S. lens has a few extras up its sleeve. Firstly, it's a stabilised lens, with an optical stabilisation switch providing three settings; off, mode 1 and mode 2.

Paired with the camera's in-body-image-stabilisation, Panasonic claims up to 7-stops of stabilisation can be achieved. This is a staggering performance for a full-frame camera.

Stabilisation is possibly less helpful for photographing moving subjects because you'll still want a fast shutter speed to freeze the action. However, there are plenty of other scenarios that stabilisation comes in handy, not least of which for video and of course for static subjects.

This is the first lens in Panasonic's range to feature an autofocus range limiter switch. You can set the lens to cover the full focus range from infinity to the minimum focus distance 0.95m, or restrict it to either 0.95m to 5m or any distance greater than 5m.

An auto focus range limiter comes in handy a lot. For example, you'll avoid focus shifts from close up subjects to the background if you limit to the close range. Again, shooting through objects can throw AF, but if the distance is set to greater than 5m, the camera will ignore those foreground subjects.

If you are not used to a focus range limiter, it will take time to intuitively bring it in to your shooting methods (and indeed remember it's active).

Then there are three customisable 'focus' buttons. Positioned in-between the zoom ring and the focus ring, these three buttons are positioned 90° apart from each other in easy reach whether the camera is held in landscape of portrait format.

Those focus buttons can be assigned any of a number of controls, including AF-On, (manual) focus ring lock and AE lock. These buttons make sense on a large and heavy lens such as this because the motion to press these buttons is significantly quicker and easier than shifting your grip and attention to buttons on the camera. Great stuff, Panasonic.

Like it's smaller f/4 counterpart, the Lumix S PRO 70-200mm F2.8 O.I.S. lens features a removable tripod collar. It's solid and a breeze to remove and reattach. A nice touch is that the mount has an Arca Swiss type design so it till slot straight onto those tripod heads without needing to attach a separate plate. For other tripod head types, there is the tripod thread included too.

A consistent draw to Panasonic PRO lenses is the lovely focus clutch, built within the focusing ring at the front end of the lens barrel. Switching between manual and autofocus via the focus clutch is much easier than using a switch or by making the changes to the focus mode in-camera.

Of course, that focus clutch provides a visual aid on the barrel for focus distances. You can get the same information on screen as you make manual focus changes, plus on screen you also get an indication of the focus range of that distance with the particular aperture in use.

There is a minimum focus distance of 0.95m throughout the entire zoom range and a maximum magnification of 0.21x in the telephoto setting. This is no macro lens but it is very competitive against other 70-200mm f/2.8's.

The four key focal lengths within the zoom range are marked on the zoom ring; 70mm, 100mm, 135mm and 200mm. If you want to zoom from one end to the other of the range, it's a quick 90° rotation - that's the same as most of the L-Mount lenses.

The Lumix S PRO 70-200mm F2.8 O.I.S.'s zoom ring is beautifully dampened, providing smooth zoom motions. By default the focal length is displayed on screen while any changes are made, plus it's easy to make precise changes to the nearest 1mm.

Both ridged rings are generous in size and feel great in the hand. They are grippy and seem to be durable. You won't be fiddling to find these rings at any point, whichever way the camera is being used.

Like other lenses in the range, the autofocus motor copes well for photo and video. When used with the S1R for photography, it is wonderfully rapid, plus it's silent. Put it this way - the Lumix S PRO 70-200mm f/2.8 O.I.S. lens does not hinder the camera's existing AF capability.

When used for video, the AF motor speed is geared in preference for smooth focus transition over quick snappy ones like in photography. We've said it in our other Panasonic lens tests, but autofocus transitions are buttery smooth, without dragging their heels.

The Panasonic Lumix S PRO 70-200mm F2.8 O.I.S. is supplied with a lens cap and lens hood, both of which lock on quick and securely and are removed easily. A soft protective case is supplied with the lens.

For action in just about any scenario that this focal length range covers, we expect this weighty and solid 70-200mm f/2.8 telephoto zoom lens to serve the needs of pro photographers very well.

The 70-200mm focal length range gives an angle of view ranging between of 34° at the wide end to 12° at the telephoto end on a full frame sensor.

We have taken our images in raw format and with all lens corrections turned off to ensure any lens distortions are present. Chromatic aberrations (colour fringing) is absent in virtually all images at any lens setting.

At the maximum f/2.8 we did observe a little colour fringing around tree branches against bright sky in the corners of the picture, but the effect is minor and easily corrected post capture. An impressive performance.

Light fall-off, which the difference in brightness between the centre and the edges of the frame and is also know as vignetting, is very well controlled by the Lumix S PRO 70-200mm F2.8 O.I.S. lens.

There is a very slight pincushion distortion across the entire 70-200mm focal length range. This effect is well controlled though and can be eliminated in editing software without a compromise on final image quality.

The Lumix S PRO 70-200mm F2.8 O.I.S. lens has a firm control over lens flare and offers some of the best sunstars from the Panasonic L-Mount range of lenses. Crisp and clean lines meeting almost all the way to the light source with minimal mushing. There were some occasional instances of ghosting which we found unpredictable, but nothing that would concern us overall.

The minimum focus distance of 0.95m and maximum magnification of 0.21x is par for the course for a full-frame telephoto zoom lens. Really, this is a lens to be used at distance. This uncropped image show how close you can get to a CF card.

Our expectation was by and large a reality, with a smooth and rounded bokeh at f/2.8 and f/4. First noted at f/5.6, we are seeing the polygonal effect a little earlier than in the 24-70mm lens. Another shared characteristic between the two lenses is at f/2.8, where bokeh in the very corners is misshapen a little. It's a bit like the cats-eye effect, but just on the very outer edge. That shaping is nothing untoward though, and the effect is gone by f/4.