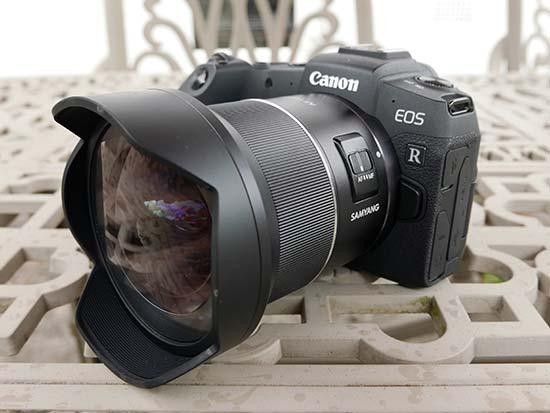 The Samyang 14mm RF is comprised of 14 elements in 10 groups, including 3 aspherical lenses, 1 high reflective lens and 2 extra-low dispersion lenses, and there's an Ultra Multi-layer Coating to help reduce flare and ghosting

This lens boasts a weather-sealed design that protects it from dust, light rain and snow and it features a rounded 7 blade diaphragm which helps to creates an attractive blur to out of focus areas of the image.

It has a minimum focusing distance of 0.20m (0.66ft) and a maximum reproduction ratio of 0.12x. It uses a rear filter holder at the lens mount.

Weighing in at 484 grams / 17.07 ounces and measuring 9.5cm in length, the Samyang AF 14mm F2.8 RF is quite a small, lightweight lens given its ultra-wide-angle focal length.

Compared to it's most direct rival, the Canon RF 15-35mm F2.8L IS USM zoom lens, the new Samyang lens is about 360 grams lighter and 3cms shorter in length, so what you lose in focal range, you more than make up for in terms of portability.

As seen in the photos below, it's quite a good match for the diminutive Canon EOS RP camera that we tested it with. It would be even more at home on the larger EOS R body, or the upcoming EOS R5 / R6 cameras.

Build quality is very good. The Samyang AF 14mm F2.8 RF lens has an aluminum alloy housing and a metal mount too. The optical elements are made of high-grade glass and aspherical lenses have been included to minimise aberration and unnecessary light dispersion.

This lens is fully weather-sealed to help protect it against dust, light rain and snow, a commendable design decision given the low price tag that it commands.

Focusing is usefully internal and manual focusing is possible when the MF mode is selected via the AF/MF switch on the side of the barrel. There's no distance and/or depth of field scale available on this lens.

The Samyang AF 14mm F2.8 RF has a generously sized focus ring given the overall size of the lens which is ridged for easier grip. There are no hard stops at the ends of the range, making it more difficult to set focus at infinity.

When it comes to auto-focusing, the Samyang AF 35mm F1.4 RF is a fairly quick performer, taking about 0.25 seconds to lock onto the subject when mounted on the Canon EOS RP camera that we tested it with.

We didn't experience very much "hunting" at all, either in good or bad light, with the lens accurately focusing almost all of the time. It has a quiet focusing mechanism, too, which makes this lens well-suited to video recording.

The 14mm focal length provides an angle of view of 113.9 degrees on a 35mm full-frame camera.

Chromatic aberrations, typically seen as blue or purple fringes along contrasty edges, were not too apparent in our test shots, only appearing in very high contrast areas.

With the lens set to its maximum aperture of f/2.8, there is some very obvious light fall-off in the corners, requiring you to stop down by at least 3 f-stops to prevent it.

The Samyang AF 14mm F2.8 RF isn't claimed to be a macro lens, with a maximum magnification of 0.12x, but it does have a useful minimum focusing distance of 0.20m (0.66ft). The following example demonstrates how close you can get to your subject.

The Samyang AF 14mm F2.8 RF is capable of producing quite nice sunstars when stopped-down to f/16 and f/22, as shown below, although it is quite prone to flare even with the fixed lens hood.

In the AF 14mm F2.8 RF lens, Samyang have employed an iris diaphragm with seven rounded blades, which has resulted in fairly nice bokeh for this ultra-wide-angle lens.