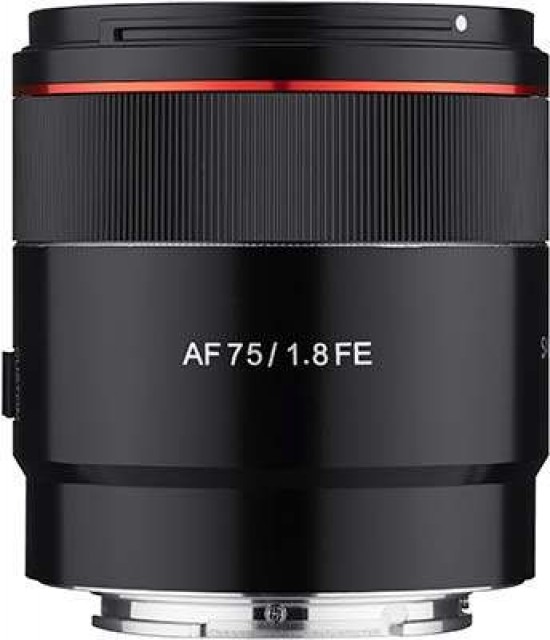 The new Samyang AF 75mm f/1.8 FE is a remarkably small and compact short-telephoto lens that's both super-sharp and capable of delivering some delicious bokeh, all at a price that seriously undercuts its main rivals. It doesn't feature any degree of weather-proofing, and the auto-focusing system isn't quite as snappy as Sony's native alternatives, but otherwise there's very little to complain about, and lots to like.

75mm sounds like a rather odd choice of focal length for a prime lens, but Samyang point out that 85mm actually became the defacto standard for portrait when SLR cameras were all the rage. Now, with the advent of mirrorless, Samyang claims that 75mm is a much more suitable focal length, given the short flange back of mirrorless cameras. And anyway, Leica have no less than five different 75mm primes in their arsenal of lenses, so Samyang must be onto something.

In terms of image quality, sharpness is very good in the centre when shooting wide-open at f/1.8 and outstanding from f/2.8 onwards, although the edges aren't quite as sharp as the centre, with f/2.8-f/11 producing the sharpest results. There is very little evidence of chromatic aberrations and some obvious but acceptable vignetting at wide-open apertures. Still, remember that this is a lens that costs less than £$400.

Auto-focusing was acceptably quick on the Sony Alpha A7 III that we tested the lens with, and the AF mechanism is very quiet too, making it well-suited for video use.

As with Samyang's previous AF lenses, the build quality is again excellent, with the alloy metal lens mount and housing adding to the overall premium feel. Samyang have also included a high quality lens case and a good lens hood too, pretty amazing given the budget price-tag. And we haven't even mentioned the new Custom Mode switch, which usefully turns the focus ring into an aperture-control dial.

In terms of its main rivals, there's really only the Sony FE 85mm F1.8, which is around £$160 more expensive and bigger and heavier than the tiny Samyang 75mm. The Sony does have weather-proofing, though, and slightly faster AF, so the decision between the two isn't quite so clear-cut in either direction.

Samyang have one again produced an innovative prime lens that delivers the goods at a very attractive price. Other than the lack of weather-sealing (which would have inevitably made the lens bigger and heavier) and the fact that it doesn't say Sony on the side, there really isn't much to criticise here, making the new Samyang AF 75mm f/1.8 FE more than worthy of both your serious consideration and our Highly Recommended award.