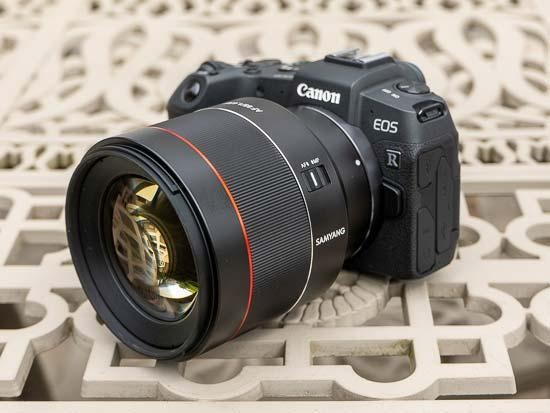 We tested the Sony FE version of this lens last year, and now Samyang have essentially changed the mount and released exactly the same lens for the Canon EOS R full-frame mirrorless camera series.

Whereas there are at least five main rivals to the Sony version, this new Canon RF lens only has two direct rivals in the shape of the even faster, much heavier and much, much more expensive Canon RF 85mm F1.2L USM and DSM lenses - so it's an even more attractive proposition for Canon owners than for Sony shooters.

In all other regards the Samyang AF 85mm f/1.4 RF lens is the equal of its Sony cousin, in terms of design, build quality, performance and image quality.

Sharpness is acceptable when shooting wide-open at f/1.4, very good at f/2 and outstanding from f/2.8 onwards, although the edges aren't quite as sharp as the centre, with f/2.8-f/11 producing the sharpest results. There is some evidence of chromatic aberrations plus vignetting at wide-open apertures, although admittedly that's something that other fast lenses also suffer from.

The build quality is surprisingly good given the price tag, with the metal lens mount and housing adding to the high-quality feel, Samyang have also included a very good lens hood, and weather-sealing is the icing on the proverbial cake. Auto-focusing was acceptably quick on the Canon EOS RP camera that we tested the lens with, and the AF mechanism is pretty quiet too, making it well-suited to both stills and video use.

In summary, if you want an affordable yet high-quality portrait prime for your Canon EOS R camera, there's only one contender in town - the new Samyang AF 85mm f/1.4 RF lens.