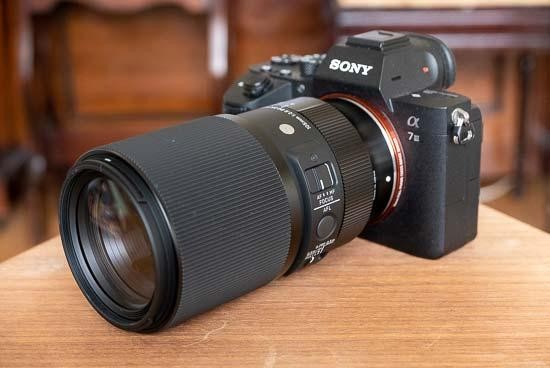 It can also be used with APS-C sensor models where it provides a 157.5mm equivalent focal length.

It has a near-circular 9 blade diaphragm which creates an attractive blur to the out-of-focus areas of the image, while an internal focusing mechanism means the lens barrel doesn’t move, and it's also dust and moisture resistant.

Other new features include a traditional aperture ring that's complemented by both a Lock button and a De-click button. There's also a customizable AFL button, as per many of Sigma's other lenses.

It's fully compatible with Sony’s Continuous AF (AF-C) and high-speed autofocus modes, plus the camera's in-body image stabilisation system, if it's available.

It's overall size complements a small camera body like the Sony A7 III body that we tested it with, as shown in the product photos.

Build quality is excellent. The lens has a plastic shell with a mixture of metallic parts and a compound material, TSC (Thermally Stable Composite) used inside.

It also incorporates a brass bayonet mount that's supposedly more durable. The optical elements are made of high-grade glass.

The Sigma 105mm F2.8 DG DN MACRO Art has a weather-sealed dust and moisture resistant design which makes it well-suited to life in both the field and the studio.

There is a traditional aperture ring on the lens barrel, which allows you to set the aperture in 1/3 steps, complete with full aperture markings.

The aperture is also shown in the viewfinder or on the LCD screen as you change it via the ring.

The aperture ring is nicely damped and makes a distinctive click as you change the setting, and it also has quite a stiff action, making it less easily moved when stored in a pocket or bag.

The Sigma 105mm F2.8 DG DN MACRO Art also has a Click switch, which as its name suggests can be used to de-click the aperture ring mechanism when shooting video or for more candid subjects, or to turn it on for stills.

Focusing is usefully internal and manual focusing is possible when set via the Focus switch on the lens barrel.

There are no hard stops at both ends of the range, though, making it more difficult to set focus at infinity.

Polariser users should be pleased that the 62mm filter thread doesn't rotate on focus.

When it comes to auto-focusing, the Sigma 105mm F2.8 DG DN MACRO Art zoom proved to be a fairly quick performer on the Sony A7 III that we tested it with, taking about 0.25 seconds to lock onto the subject.

We didn't experience too much "hunting" in good light, with the lens quickly and accurately focusing almost all of the time. It does struggle a little more in low-light conditions, though, often requiring a few attempts to successfully lock onto the subject.

For a macro lens, it's a fairly quiet performer thanks to the integrated HSM (Hyper Sonic Motor) driven internal focusing, but in more general terms the AF mechanism is still quite audible. Thankfully it's much quieter when recording video, making it ideal for movie shooting.

The Focus Range Limiter switch prevents the lens from hunting through the entire focusing range. There are three options - Full, infinity to 0.5m, and 05.m to 0.295m.

The Sigma 105mm F2.8 DG DN MACRO Art has a round AFL (Auto Focus Lock) button which keeps the lens locked to the current focusing distance, useful if you're auto-focusing and don't want the lens to try and find focus again.

Alternatively the AFL button can also be re-configured to assign various functions to the lens barrel.

The Sigma 105mm F2.8 DG DN MACRO Art does not feature optical image stabilisation, instead relying on the A7 III's own built-in stabilisation system.

This is a key difference between this lens and the Sony FE 90mm f/2.8 Macro G OSS, which does feature built-in stabilisation.

The Sigma 105mm F2.8 DG DN MACRO Art lens is commendably supplied with both a padded case and a good quality plastic round lens hood (LH653-01) which locks into place when fully engaged.

Chromatic aberrations, typically seen as blue or purple fringes along contrasty edges, were not very apparent in our test shots, only appearing in very high contrast areas.

With the lens set to its maximum aperture of f/2.8, there is some obvious light fall-off in the corners, requiring you to stop down by at least 2 f-stops to prevent it.

There's some very slight barrel distortion evident at 105mm in the RAW files - the Sony Alpha A7 III camera automatically and successfully applies corrections to the JPEG files.

The Sigma 105mm F2.8 DG DN MACRO Art doesn't create the nicest sunstars when stopped-down to f/16 or f/22, as shown below, although flare is at least well controlled when shooting directly into the sun.

In the 105mm F2.8 DG DN MACRO Art lens, Sigma employed an iris diaphragm with 9 rounded blades, which has resulted in quite nice bokeh in our view.

We do realise, however, that bokeh evaluation is subjective, so we've included lots of examples below for your perusal,including the same subject shot at all seven full aperture values.

In order to show you how sharp the Sigma 105mm F2.8 DG DN MACRO Art lens is, we are providing 100% crops on the following page.