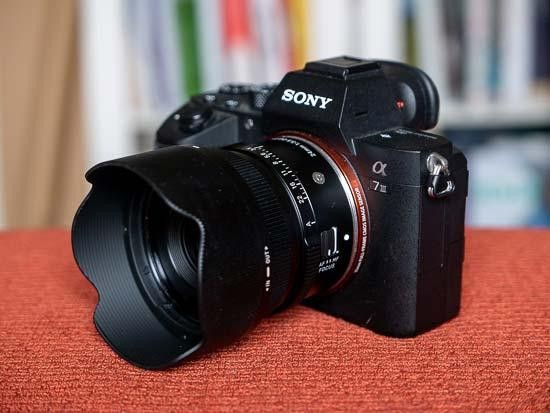 This new lens is part of the Sigma I series of compact, high-performance, impeccably constructed primes for mirrorless camera systems, which boast a premium all-metal weather-sealed construction, a magnetic metal lens cap and a metal lens hood.

It features 10 elements in 8 groups, with one Special Low Dispersion (SLD) element to reduce chromatic aberrations and color fringing and three aspherical lenses which help to control distortion and spherical aberrations.

There's a Super Multi-Layer Coating to minimize internal reflections so that flare and ghosting do not occur.

This lens boasts a dust- and splash-proof structure and has a minimum focusing distance of 10.8cm with a maximum magnification of 0.5x.

It has a rounded 7-blade diaphragm which creates an attractive blur to out-of-focus areas of the image and an internal focusing mechanism which means the lens barrel doesn't move.

There is a stepping motor for fast, quiet and precise auto-focusing, while the focusing ring provides fine manual focus control.

A traditional aperture ring runs from f/3.5 to f/22 in third-stop increments with an Auto setting also available for camera-based aperture selection.

Weighing in at 230g, the all-metal bodied Sigma 24mm F3.5 DG DN is very light for such a premium full-frame lens.

It's actually a little heavier than the comparable Tamron 24mm F/2.8 Di III OSD M1:2, though, which at 215g is 15g lighter than this new Sigma alternative.

On the other hand, tt is notably more expensive than its main Tamron rival, to the tune of around £80 / $200, and that lens also offers a faster maximum aperture.

Its overall size is very well-suited to a camera like the Sony A7 III that we tested it with, as shown in the product photos. Even with the supplied hood attached, it is still quite discrete for a 24mm lens.

Build quality is simply superb, far exceeding what you might expect from a mid-range prime lens.

Sigma have really gone to town on the new I series, so much so that they've explained in great detail just how much thought has gone into it.

A rubber seal is incorporated into the lens mount's design to make it dust- and splash-resistant.

The Sigma 24mm F3.5 DG DN lens has a metal lens mount and it accepts 55mm filters via metal threads on the front of the lens.

The Sigma 24mm F3.5 DG DN lens has a rather narrow, ridged motor-assisted focus ring that is very nicely damped. Manual focusing is possible by using the focus mode switch to toggle between AF and MF.

There are no hard stops at either end of the range, making it a little more difficult to set focus at infinity. Polariser users should be pleased that the 55mm filter thread doesn't rotate on focus.

The manual focusing ring is positioned a little too closely to the lens hood when it's fitted, though, so much so that my right thumb rubbed along the edge of the hood as I rotated the focusing ring. A minor detail, maybe, but still of some importance on a lens where attention to detail is the defining characteristic.

When it comes to auto-focusing, it proved to be a quick performer on the Sony A7R III camera that we tested it with.

It's much faster and quieter than the Tamron 28mm F2.8 for Sony lens, which we criticised in our review as being "fairly slow and quite noisy".

We didn't experience very much "hunting", either in good or bad light, with the lens accurately focusing almost all of the time.

Sony's near flawless Eye AF works perfectly with this lens, quickly locking onto and tracking the subject's eye despite the wide-angle view, and it fully supports Sony's DMF and AF+MF shooting modes.

The Sigma 24mm F3.5 DG DN lens features an aperture ring that has 1/3EV stops ranging from f/3.5 to f/22 and an Auto setting if you prefer to set the aperture via the camera body.

Sadly there's no Click switch on the lens barrel that lets you de-click it for silent operation during movie recording.

The Sigma 24mm F3.5 DG DN lens isn't supplied with a lens case, but it does come with a very good quality, hybrid plastic and metal, circular lens hood (LH576-01) that continues the ribbed texture of the lens barrel, and also an innovative magnetic metal lens cap (LCF55-01M), in addition to a normal plastic cap.

This dedicated metal cap clips to the front surface of the lens magnetically, and there's even an optional magnetic metal lens cap holder (CH-11) that can be clipped to a bag or a belt.

Note that the magnetic lens cap can't be used with filters and is quite awkward to use when the lens hood is fitted.

The 24mm focal length provides an angle of view of 84.1 degrees on a full-frame camera.

Chromatic aberrations, typically seen as blue or purple fringes along contrasty edges, were somewhat apparent in our test shots, appearing in very high contrast areas. The examples below show the worst-case scenario.

With the lens set to its maximum aperture of f/3.5, there is obvious light fall-off in the corners, requiring you to stop down by at least 3 f-stops to completely prevent it.

There's not much barrel distortion evident in either the RAW or JPG files - the Sony Alpha A7 III automatically and successfully applies corrections to the JPG files.

The Sigma 24mm F3.5 DG DN is capable of producing very nice sunstars when stopped-down to f/16 and f/22, as shown below.

The lens is a little susceptible to flare when shooting directly into the sun, though, even with the supplied lens hood fitted.

The Sigma 24mm F3.5 DG DN is a pretty handy macro lens, offering a very close minimum focusing distance of just 10.8cm and a maximum magnification of 1:2 / 0.5x. The following examples demonstrate how close you can get to your subject.

In the 24mm F3.5 DG DN lens, Sigma have employed an iris diaphragm with 7 circular blades, which has resulted in quite appealing bokeh for what is after all a wide-angle lens.

We do realise, however, that bokeh evaluation is subjective, so we've included several examples below for your perusal, all shot wide-open at f/3.5.