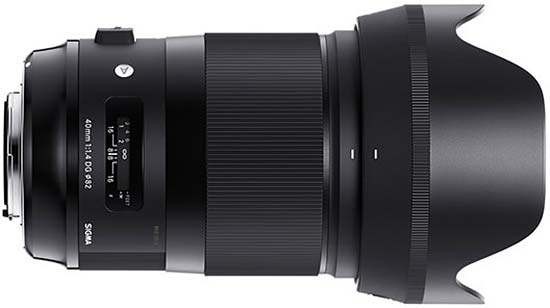 The Sigma 40mm F1.4 DG HSM is another outstanding prime lens in Sigma's ever-expanding Art range of lenses, although it is big, heavy and expensive.

The novel 40mm focal length takes a little while to get used to, falling between the more "normal" 35mm and 50mm focal lengths that photographers are more used to, but it quickly loses any real significance after you've used it for a while.

Sharpness is incredibly high across the frame. Even with our Canon EOS 5DS R test camera recording 50-megapixel images, detail is exceptionally sharp. Shooting at the maximum f/1.4 aperture does reveal a very minor reduction in sharpness, but this is already resolved by f/2, and even at this aperture the lens is able to produce beautifully smooth bokeh.

Quite a lot of vignetting is apparent when shooting wide-open at f/1.4, although it quickly disappears as you stop down to f/4. Chromatic aberrations, distortion and flare are all very well controlled, and the bokeh is very appealing when shooting wide-open. The 40cm minimum focusing distance and 1:6.5 magnification ratio make the lens versatile enough to shoot reasonably close subjects.

The Sigma 40mm F1.4 DG HSM features superb build quality and a super-smooth focusing ring with hard stops at each end. It proved to be very quick, quiet and accurate when auto-focusing on the Canon EOS 5DS R. The lockable lens hood is another nice touch.

There are two main drawbacks to the Sigma 40mm F1.4 DG HSM lens - the sheer size/weight and the asking price, both a consequence of Sigma's single-minded pursuit of image quality.

£1199.99 / $1399.99 is an awful lot of money to pay for a standard prime lens, even one as well featured and built as this, while at 1.2kg, this new optic weighs twice as much as the Sigma 35mm F1.4 DG HSM and four times as much as the Zeiss Batis 40mm F2 that we recently reviewed. If you don't mind the cost in terms of both price and size, though, the Sigma 40mm F1.4 DG HSM delivers simply exquisite image quality.