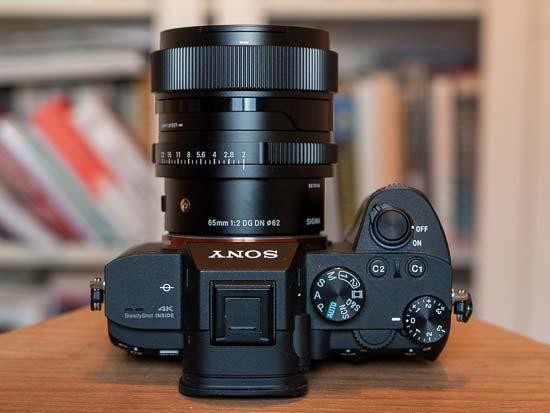 It's fair to say that 65mm is something of an unusual focal length for any 35mm full-frame camera system, so the new Sigma 65mm F2 DG DN instantly stands out from the crowd by adopting this unique feature.

Slightly longer than a classic 50mm standard lens and slightly shorter than an equally classic 85mm portrait lens, 65mm proved itself to be a surprisingly versatile half-way house between the two.

It combines something of the normal viewpoint of a 50mm lens with some of the the more pronounced bokeh effect of an 85mm lens.

In short, if you've never tried a 65mm prime lens (and who has?), then you owe it to yourself to at least set your standard zoom lens to 65mm and try it out for a while.

Alternatively, you could jump right in and buy this new Sigma 65mm lens, because other than the unusual focal length and some obvious pincushion distortion, there's a lot to like and very little not to like.

Just like its I-series siblings, one of its main unique selling point is undoubtedly its superlative build quality and vintage feel.

Coming across like a Zeiss Loxia lens complete with auto-focusing, the Sigma 65mm F2 DG DN is an incredibly well-built lens considering its mid-range price-tag.

From the weather-proof all-metal construction to the incredible attention to detail, such as the beautifully damped aperture and focus rings, ribbed lens hood and the clever, and free, magnetic lens cap, it's clear that Sigma have lavished a huge amount of time and love on this lens.

The stepping motor auto-focus system isn't completely silent or quite as fast as Sony's native lenses, but it is almost 100% reliable and quick and quiet enough for most typical users.

The traditional aperture ring is a feature that we love on any lens, and Sigma's implementation of it on the 65mm F2 DG DN is nigh on perfect.

It has a lovely action, positive enough movements between the 1/3rd aperture stops, and a pronounced gap between f/22 and the Auto setting so that you can't inadvertently select it.

The only thing that we would have liked to see is a way of de-clicking it for video use.

Thankfully, it's also a great performer optically, being pin-sharp throughout the frame almost from the get-go of wide-open at f/2.

There's some slight vignetting wide-open at f/2, but chromatic aberrations are very well-controlled by the in-camera profile and the bokeh is very nice for an f/2 lens.

The only fly in the image quality ointment is the pincushion distortion that we mentioned earlier. This is mostly removed for JPEGs by the in-camera corrections, but for Raw files you'll need to use the specific lens profile in your post-processing software to help remove it.

This unique lens doesn't really have a main rival as such, other than the manual focus only Voigtlander 65mm F2 Macro APO Lanthar and the slightly longer Samyang AF 75mm f/1.8 FE.

There are also a large number of 50mm and 85mm prime lenses available for Sony E-mount - something like the lighter, cheaper Sony FE 50mm F1.8, for example - but they don't really compete in the same ball-park as the rather uniquely compelling Sigma 65mm F2 DG DN.