The Sony DT 50mm F1.8 SAM is a mid-telephoto prime lens for Sony A-Mount SLT/SLR cameras that have an APS-C image sensor. It offers the equivalent angle of view as a 75mm lens on a 35mm camera and features a wide f/1.8 maximum aperture which creates an attractive blur to the out of focus areas of the image. It has a minimum focusing distance of 34cm and a maximum magnification of 0.2x. The internal Smooth Autofocus Motor (SAM) promises fast and quiet auto-focusing. The Sony DT 50mm F1.8 SAM lens is currently available for £159 / $145 in the UK and the US, respectively. 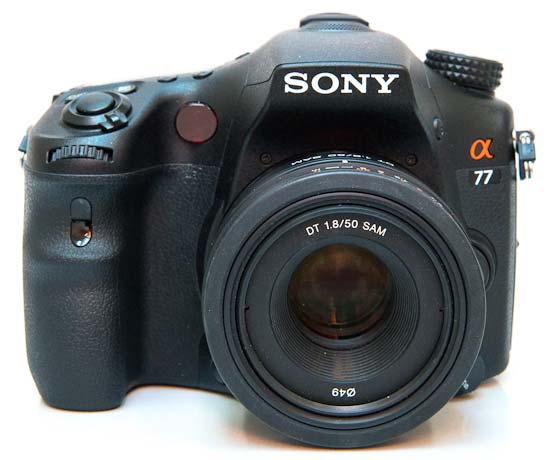 Weighing in at a mere 170 grams, the plastic-bodied Sony DT 50mm F1.8 SAM is a lightweight prime A-Mount lens that is a little dwarved by the Sony A77 body that we tested it with, as shown in the photos below. It's therefore perhaps a better match for one of Sony's smaller APS-C cameras. Note that this lens is not compatible with Sony's full frame DSLRs. 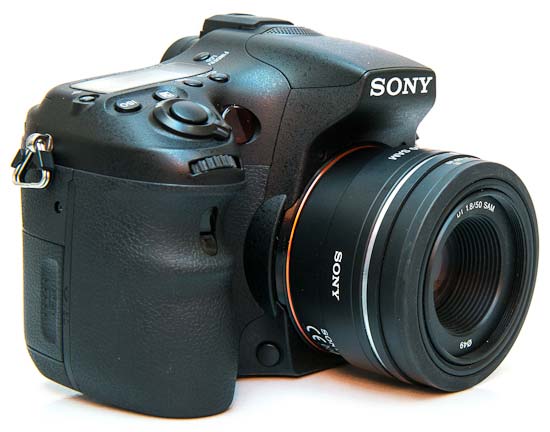 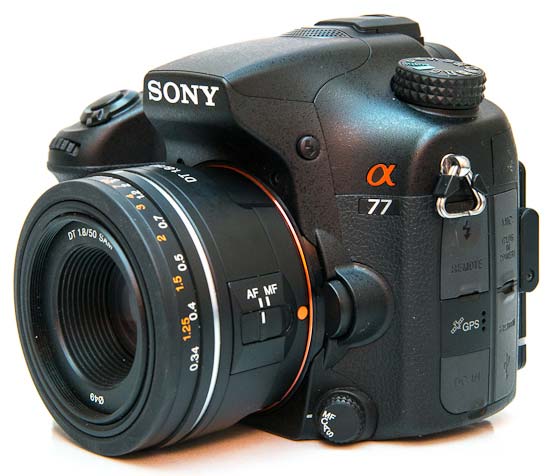 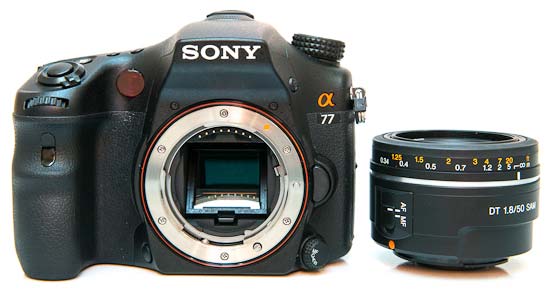 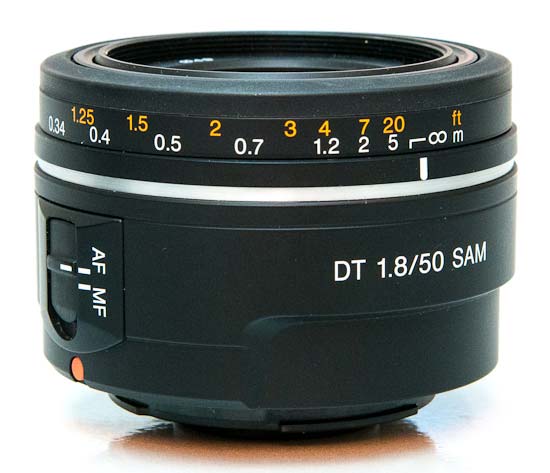 Build quality is unexpectedly good considering the relatively low price of the lens. The Sony DT 50mm F1.8 SAM has a distance scale in feet and meters, useful when manually focusing, but there's no depth-of-field scale or infrared index. 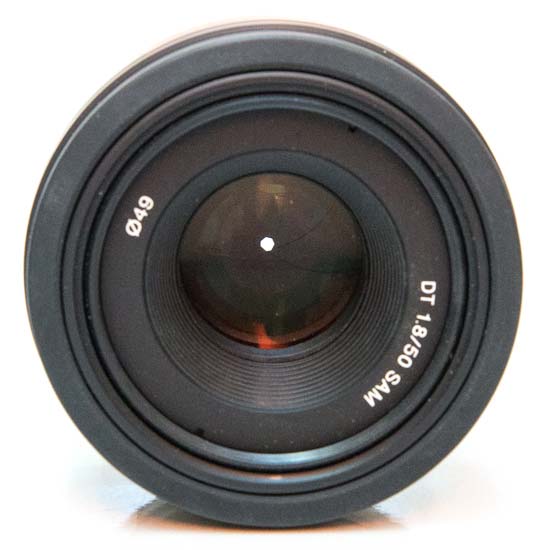 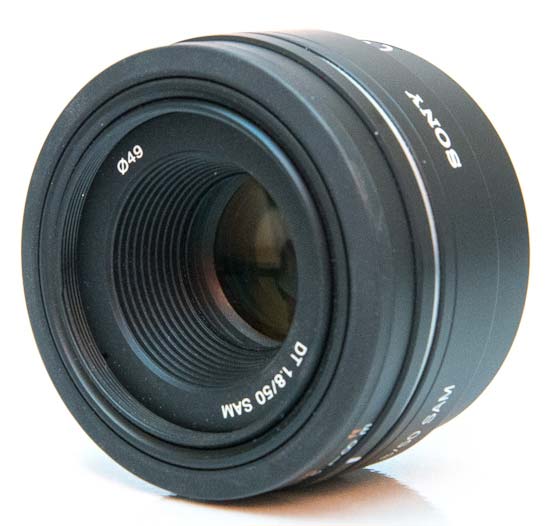 The Sony DT 50mm F1.8 SAM has a rather thin and smooth zoom ring. It takes a 120 degree turn to change the focus from close-up to infinity, with the lens extending by an extra 2cm when set to the closest working distance of 34mm. The focus ring is just over 1cm wide and features handy stops at either end of the distance scale. 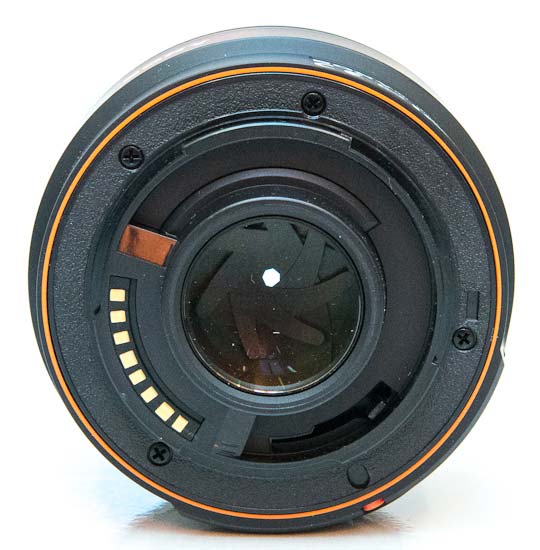 There's also a switch to change between auto and manual focus. 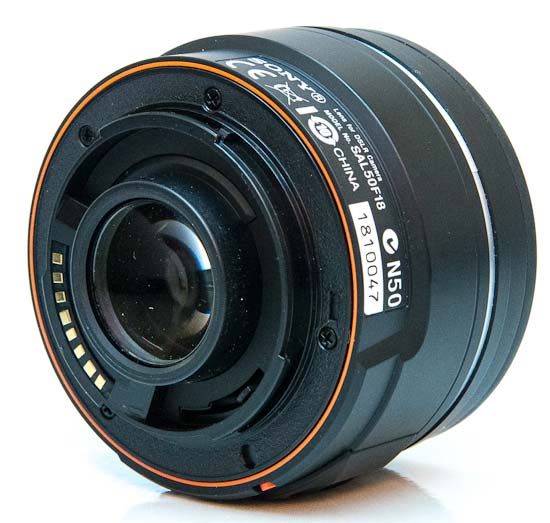 No lens hood is supplied with the lens or available as an after-market item, although the internal nature of the lens construction partly makes up for this omission.

At the 50mm focal length the angle of view is 83 degrees. 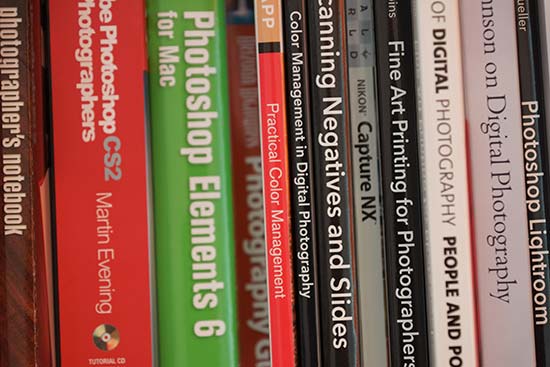 The Sony DT 50mm F1.8 SAM lens has quite a narrow focus ring. There are hard stops at both ends of the range, making it straight forward to set focus at infinity. Polariser users will be pleased to learn that the 49mm filter thread does not rotate on focus.

When it comes to auto-focusing, the Sony DT 50mm F1.8 SAM zoom is quite a quick performer, taking about 0.25 seconds to lock onto the subject when mounted on the Sony A77 that we tested it with. Note that it is noisy though, with an audible whirring, so it's not best suited to more candid shots in a quiet environment.

We didn't experience much "hunting" though, either in good or bad light, with the lens accurately focusing almost all of the time.

Chromatic aberrations, typically seen as purple or blue fringes along contrasty edges, are only apparent in a couple of our test shots taken with the A77 body. 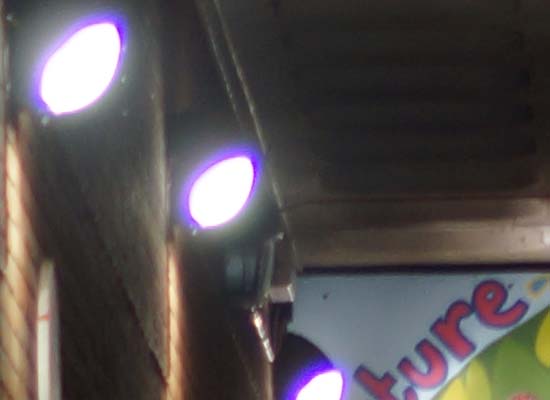 With the lens set to its maximum aperture, there is quite a lot of light fall-off in the extreme corners, as shown below. 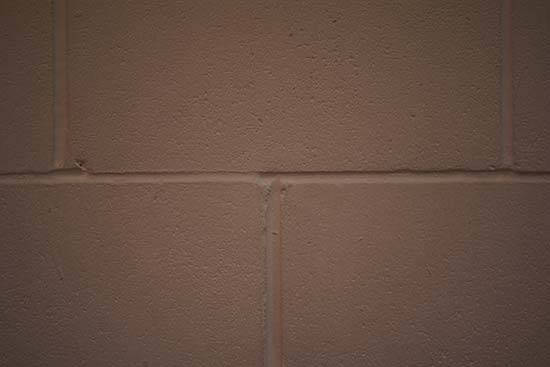 The Sony DT 50mm F1.8 SAM isn't claimed to be a macro lens, offering a minimum focusing distance of 34cm and a maximum magnification of 0.2x. The following example demonstrates how close you can get to your subject, in this case a Compact Flash memory card. 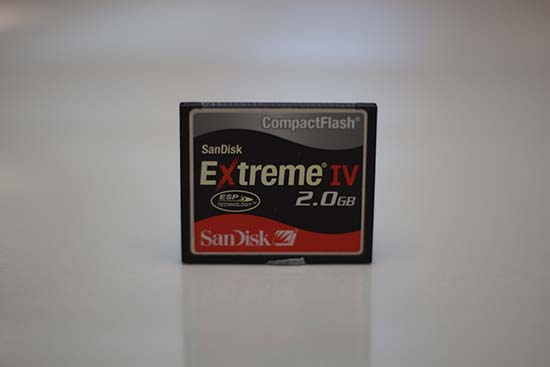 Bokeh is a word used for the out-of-focus areas of a photograph, and is usually described in qualitative terms, such as smooth / creamy / harsh etc. In the Sony DT 50mm F1.8 SAM lens, Sony employed an iris diaphragm with seven rounded blades, which has resulted in very appealing bokeh in our view. We do realise, however, that bokeh evaluation is subjective, so we've included several 100% crops for your perusal.