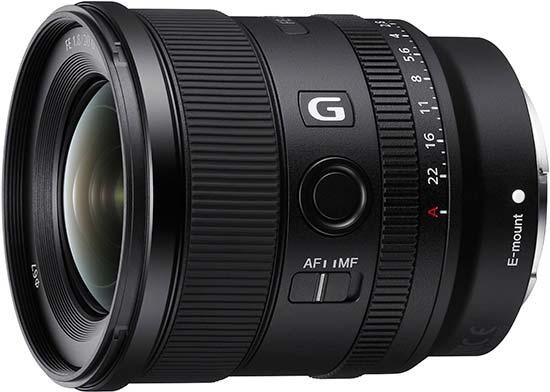 It features 14 elements in 12 groups including including AA (advanced aspherical) elements and three ED (Extra-low Dispersion) glass elements, offers a minimum focusing distance of 18cm with a maximum magnification of 0.22x, and has a 9-blade circular aperture which creates an attractive blur to the out-of-focus areas of the image.

There's also a manual aperture ring that can be de-clicked for silent video shooting, a customisable Focus Hold button, Nano AR Coating to eliminate flare and ghosting, and the lens is also dust and moisture resistant.

Weighing in at 373g, the Sony FE 20mm f/1.8 G is very light for an ultra-wide-angle full-frame lens that offers such a fast maximum aperture, and it's also compact too, measuring 73.5 x 84.7mm, making it smaller and lighter than the comparable Sony FE 24mm f/1.4 GM lens.

It's overall size and weight really complements a body like the Sony A7R III camera that we tested it with, as shown in the photos below.

Build quality is very good, not quite up to the standard of the flagship GM lens range, but not too far off. The Sony FE 20mm f/1.8 G has a sealed dust and moisture resistant design, although Sony stop short of saying that it's 100% weather-proof.

The lens has a fairly wide, ridged focus ring. Manual focusing is possible by using the focus mode switch to toggle between AF and MF.

There are no hard stops at either end of the range, making it a little more difficult to set focus at infinity. Polariser users should be pleased that the 67mm filter thread doesn't rotate on focus.

The lens utilizes not one, but two XD Linear Motors to provide quiet and smooth auto-focusing, making it very well-suited to shooting video, with the overall lens length remaining constant during focusing thanks to an internal design.

When it comes to auto-focusing, the Sony FE 20mm f/1.8 G proved to be an almost silent, very quick performer on the Sony A7R III camera that we tested it with. We didn't experience very much "hunting", either in good or bad light, with the lens accurately focusing almost all of the time.

Sony's near flawless Eye AF worked perfectly with this lens, quickly locking onto and tracking the subject's eye despite the ultra-wide-angle of view.

The Click switch on the bottom-right of the lens barrel lets you select whether the aperture ring clicks into place at each aperture stop or rotates smoothly for silent operation during movie recording.

The lens also has a customisable focus hold button which keeps the lens locked to the current focusing distance, useful if you're auto-focusing and don't want the lens to try and find focus again. It can also, amongst other things, be usefully set to Eye AF.

The 20mm focal length provides an angle of view of 94 degrees.

Chromatic aberrations, typically seen as blue or purple fringes along contrasty edges, were not really apparent in our test shots, only appearing in very high contrast areas. The 100% crops below show the worst-case scenario.

With the lens set to its maximum aperture of f/1.8, there is some noticeable light fall-off in the corners, requiring you to stop down by at least 2 f-stops to prevent it. Barrel distortion is very well controlled for such a wide-angle lens.

The Sony FE 20mm f/1.8 G certainly isn't claimed to be a macro lens, but you can get pretty close to your subject thanks to a minimum focusing distance of 18cm, with a maximum magnification of 0.22x.

The lens is quite susceptible to flare when shooting directly into the sun, though, even with the supplied lens hood fitted.

In the FE 20mm f/1.8 G lens, Sony employed an iris diaphragm with 9 rounded blades, which has resulted in appealing bokeh for such a wide-angle lens.

We do realise, however, that bokeh evaluation is subjective, so we've included several examples for your perusal.