The Sony FE 28mm f/2 is a new wide-angle prime lens for the Sony A7 full-frame E-mount compact system camera. It features nine elements in eight groups including including one AA (advanced aspherical) element and two ED glass elements, is dust- and moisture-resistant, and has a minimum focusing distance of 29cm with a maximum magnification of 0.13x. It has a near-circular 9 blade diaphragm which creates an attractive blur to the out-of-focus areas of the image, while an internal focusing mechanism means the lens barrel doesn’t move. The Sony FE 28mm f/2 lens is available for £449 / $499 in the UK and the US, respectively. The Sony FE 28mm f/2 is also compatible with the optional 0.75x Ultra Wide and the 0.57x Fisheye Converters.

Weighing in at 200grams, the aluminium alloy bodied Sony FE 28mm f/2 is very light for a full-frame lens. It's overall size complements a body like the Sony A7S body that we tested it with, as shown in the photos below. 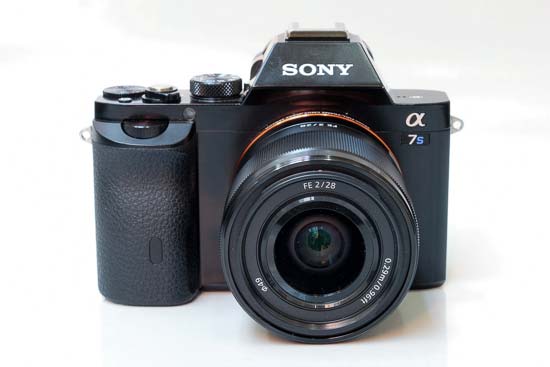 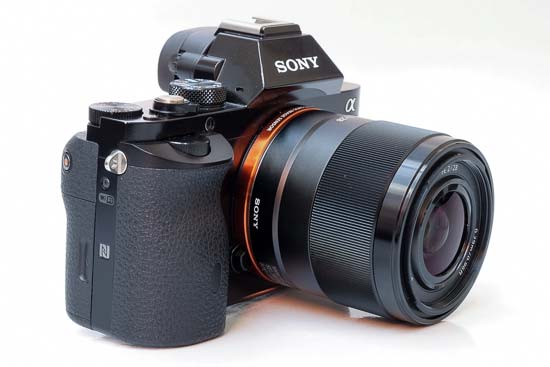 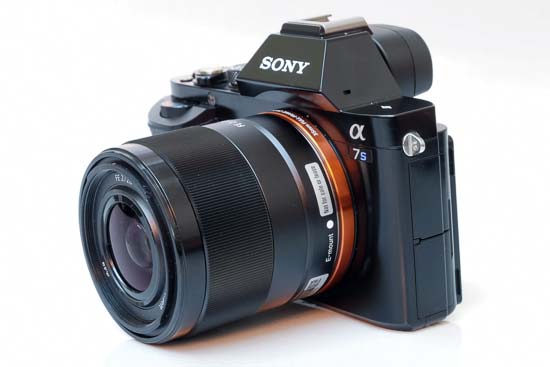 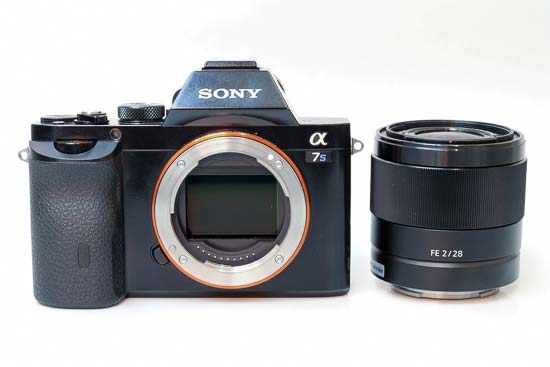 Build quality is good given the affordable price-tag. The Sony FE 28mm f/2 has a sealed dust and moisture resistant design. 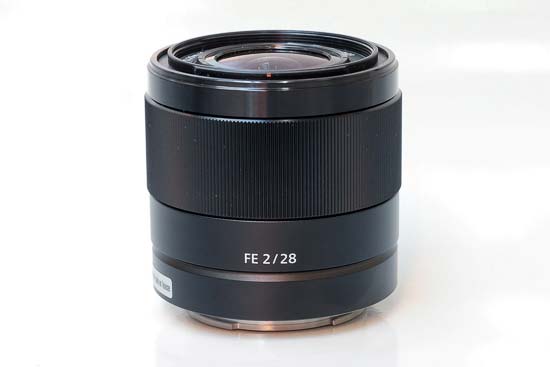 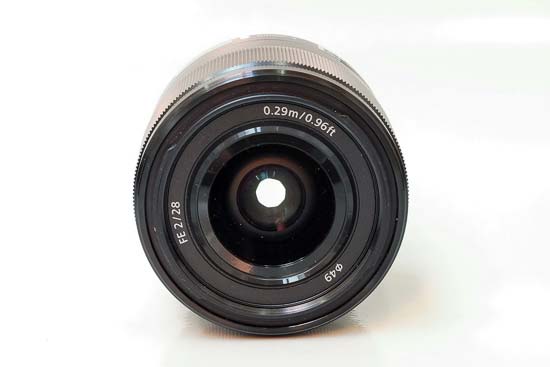 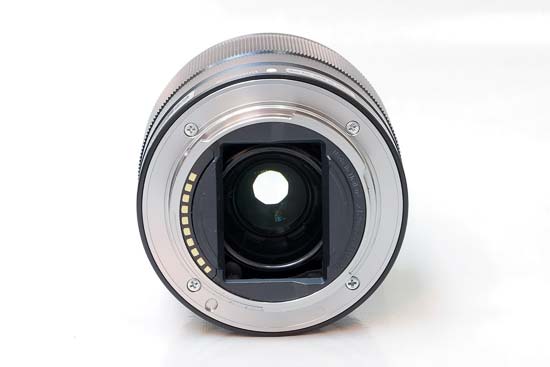 The wide and ridged focus ring is the only external control of note. Manual focusing is possible when set on the specific camera body. The lens utilizes a linear motor to produce quiet and smooth focusing, making it well-suited to shooting video, with the overall lens length remaining constant during focusing. 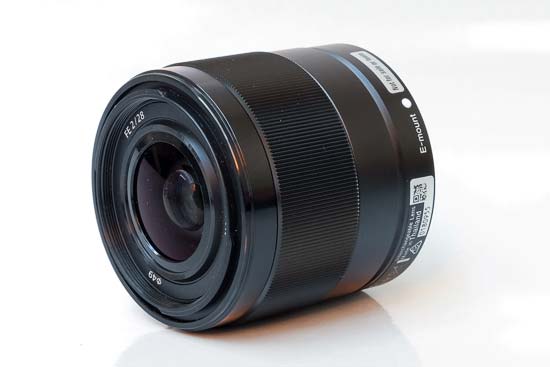 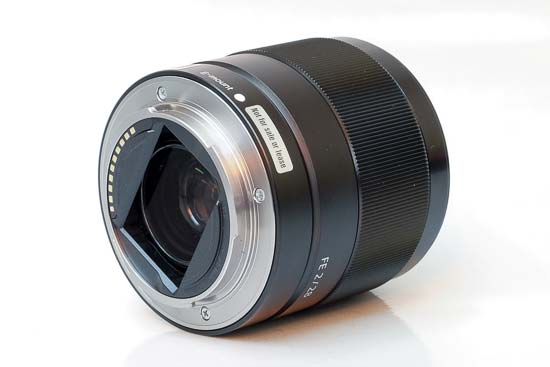 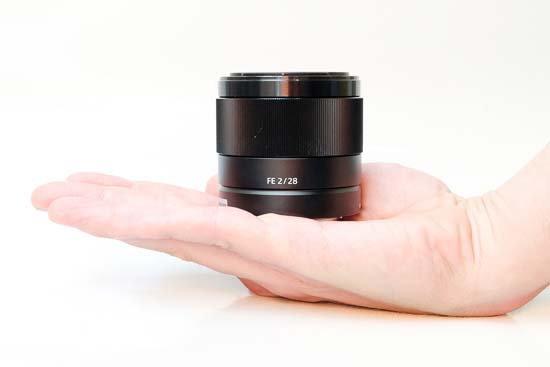 The Sony FE 28mm f/2 lens is commendably supplied with both a soft case and a fairly good quality plastic petal-shaped lens hood. 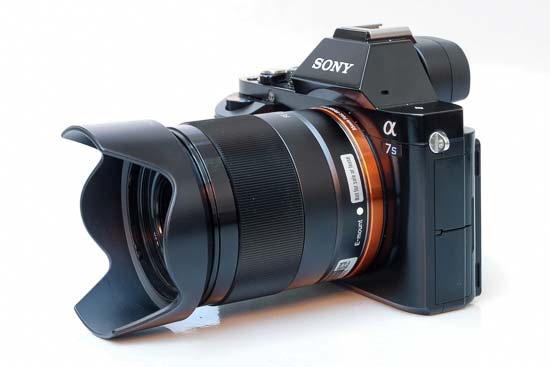 At the 28mm focal length the angle of view is 54 degrees. 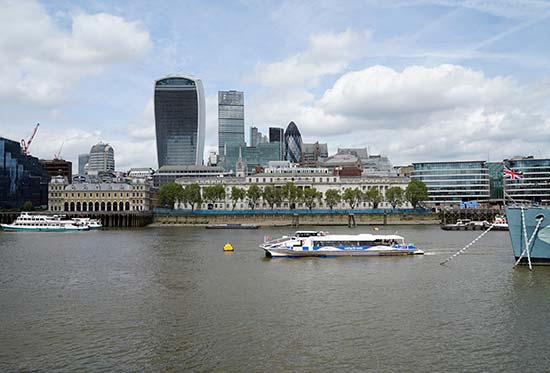 Field of view at 28mm

The Sony FE 28mm f/2 lens has quite a wide focus ring. There are no hard stops at either end of the range, making it a little more difficult to set focus at infinity. Polariser users should be pleased that the 55mm filter thread doesn't rotate on focus.

When it comes to auto-focusing, the Sony FE 28mm f/2 zoom is a quiet and fairly quick performer on the Sony A7S that we tested it with, taking about 0.25 seconds to lock onto the subject.

We didn't experience much "hunting", either in good or bad light, with the lens accurately focusing almost all of the time, and it's also a quiet performer thanks to the linear motor driven internal focusing, making it ideal for movie shooting.

Chromatic aberrations, typically seen as blue or purple fringes along contrasty edges, were not very apparent in our test shots, only appearing in high contrast areas. The examples below show the worst-case scenario.

With the lens set to its maximum aperture of f/2, there is very obvious light fall-off in the corners, requiring you to stop down by at least 3 f-stops to prevent it.

There's quite a lot of barrel distortion evident at 28mm in the RAW files - the Sony A7/A7S automatically and successfully apply corrections to the JPG files. 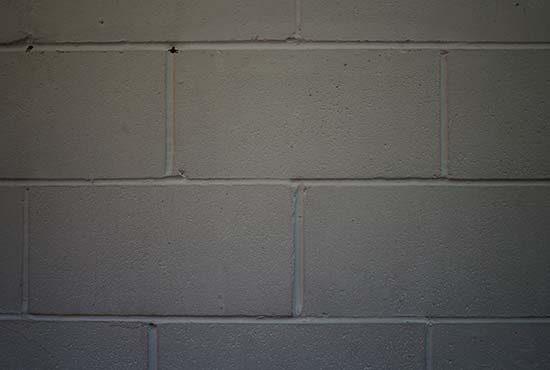 The Sony FE 28mm f/2 isn't claimed to be a macro lens, offering a minimum focusing distance of 29cm with a maximum magnification of 0.13x. The following example demonstrates how close you can get to your subject, in this case a Compact Flash memory card. 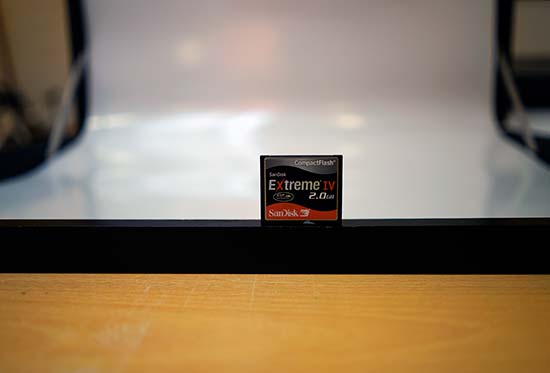 Bokeh is a word used for the out-of-focus areas of a photograph, and is usually described in qualitative terms, such as smooth / creamy / harsh etc. In the FE 28mm f/2 lens, Sony employed an iris diaphragm with nine rounded blades, which has resulted in quite appealing bokeh for a wide-angle lens. We do realise, however, that bokeh evaluation is subjective, so we've included several 100% crops for your perusal.