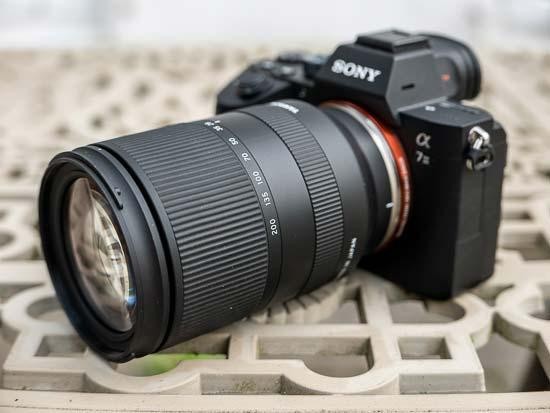 It can also be used with Sony's APS-C cameras where it provides a 42-300mm equivalent focal length range.

The Tamron 28-200mm for Sony is the first all-in-one-zoom lens in the world to achieve a maximum aperture of F2.8 at the 28mm wide-angle end.

Optically is is comprised of 18 elements in 14 groups including GM (Glass Molded Aspherical), hybrid aspherical, XLD (eXtra Low Dispersion) and LD (Low Dispersion) lens elements that are precisely arranged to effectively control chromatic and other aberrations.

The 28-200mm Sony FE lens is dust- and moisture-resistant and has a fluorine-coated front element to protect against fingerprints and smudging.

The minimum focusing distance is 19cm with a maximum magnification of 0.32x and it has a near-circular 7 blade diaphragm which creates an attractive blur to the out-of-focus areas of the image.

Its overall size perfectly matches a full-frame body like the Sony A7 III body that we tested it with, as shown in the photos below, not feeling at all front heavy even when fully extended to 200mm.

The build quality of the Tamron 28-200mm F2.8-5.6 Di III RXD lens is pretty good, with a sober all-black design that matches the other lenses that Tamron have released for Sony E-mount.

It has a metal lens mount and accepts 67mm front filters via plastic threads.

The Tamron 28-200mm Sony FE has a sealed dust and moisture resistant design thanks to a series of seals that are located at the lens mount area and other critical locations.

The front surface of the lens element is coated with a protective fluorine compound that has excellent water- and oil-repellant qualities.

The wide and ridged zoom ring and the narrower manual focus ring are the key external controls of note.

Manual focusing is possible via the textured focus ring when set on the specific Sony camera body.

There are no hard stops at either end of the zoom range, making it a little more difficult to set focus at infinity.

When it comes to auto-focusing, the Tamron 28-200mm F2.8-5.6 Di III RXD zoom is a very quiet and pleasingly quick performer on the Sony A7 III that we tested it with, taking about 0.15 seconds to lock onto the subject.

There's a handy Zoom Lock switch which can be activated when the lens is set to 28mm to help keep the lens in its retracted position when it's stored in a camera bag or hung around your neck / over your shoulder.

The ability to shoot at f/2.8 is a major selling-point of this lens, but it only applies from 28-31mm, whereupon the maximum aperture changes to f/3.1.

For reference, the maximum apertures at the marked focal lengths are as follows:

This lens is fully compatible with all of these Sony camera features:

There's some barrel distortion evident at 28mm in the RAW files. The Sony A7 III automatically and successfully applies corrections to the JPG files. At 200mm there's some pin-cushioning in the RAW files, which is again corrected when shooting JPGs.

In the 28-200mm F2.8-5.6 Di III RXD lens, Tamron have employed an iris diaphragm with seven rounded blades, which has resulted in quite appealing bokeh in our view.

We do realise, however, that bokeh evaluation is subjective, so we've included several 100% crops for your perusal.