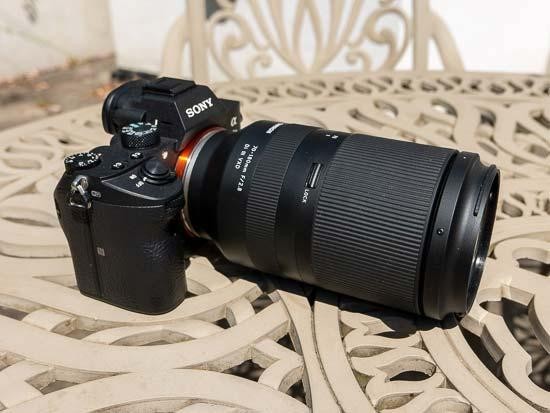 Once again Tamron have thought outside the box to create an amazingly compact, lightweight telephoto zoom that still delivers that all-important fast f/2.8 aperture throughout the range. It significantly undercuts its main competition in terms of both size and price, whilst still delivering the goods in performance and image quality.

Any so-called minus points are a direct consequence of Tamron's commendable decision to make their telephoto zoom lens both smaller and cheaper than their rivals. The most obvious elephant in the room is the brave move to cap the maximum telephoto reach at 180mm instead of the classic 200mm.

In practice you'd hardly notice the difference in terms of what the lens and camera actually records, whilst being able to appreciate the fact that the Tamron 70-180mm weighs in at a whopping 670g less than Sony's equivalent lens. It's so small that it even weighs less and is shorter than Sony's f/4 70-200mm lens!

Other design choices that some may tut at then follow on from the overall size of the lens. The 70-180mm does admittedly extend by an extra 30mm when set to the longest focal length. There's no built-in vibration compensation, with the lens relying on the camera body for 4-stops of CIPA-approved OIS. And there's no tripod mount collar either, with Tamron claiming that the lens is small and light enough simply not to need one, and pointing out that it's much easier to fit this lens into a camera bag without one attached.

There's also no focus limiter or AF/MF switch, with the only notable feature on the exterior of the Tamron 70-180mm lens being the addition of a Zoom Lock switch to prevent creep during transportation.

We'd argue that the biggest drawback to the Tamron 70-180mm is the fact that it is not compatible with teleconverters - the ability to shoot at longer focal lengths at f/4 (1.4x) or f/5.6 (2x) would have been very welcome.

The all-new auto-focusing system proved to be reliably quick and accurate on the Sony A7 III that we tested the lens with, especially when using AF-C mode for moving subjects, and it's also fully compatible with all of Sony's focusing modes. This lens doesn't have a built-in optical image stabilisation system, instead relying on Sony's in-camera system, which will be fine for everyone except those who own a first generation Alpha camera (which don't have built-in OIS).

In terms of that all-important image quality, the 70-180mm F/2.8 Di III VXD is a great performer that consistently delivers sharp images with lovely bokeh when shooting wide open at f/2.8 thanks to the 9-blade iris diaphragm. In the centre of the image it's bitingly sharp throughout all of the zoom and aperture range. Performance isn't quite as good at the edges of the frame, though, requiring you to stop down to f/5.6-f/8 to get the best sharpness.

Build quality is good rather than excellent. It's not quite at the same level as the metal construction of Tamron's SP lenses or the better Sony zooms, but the polycarbonate construction does at least ensure that the 70-180mm F/2.8 Di III VXD is very light. It's also usefully weather resistant too, with leak-resistant seals employed throughout the lens barrel.

Overall, unless you really, really need the extra 20mm reach of a "true" 70-200m zoom, the new Tamron 70-180mm F/2.8 Di III VXD is a truly unique lens that performs exceptionally well in almost every regard, and is therefore a deserved winner of our coveted Essential award.