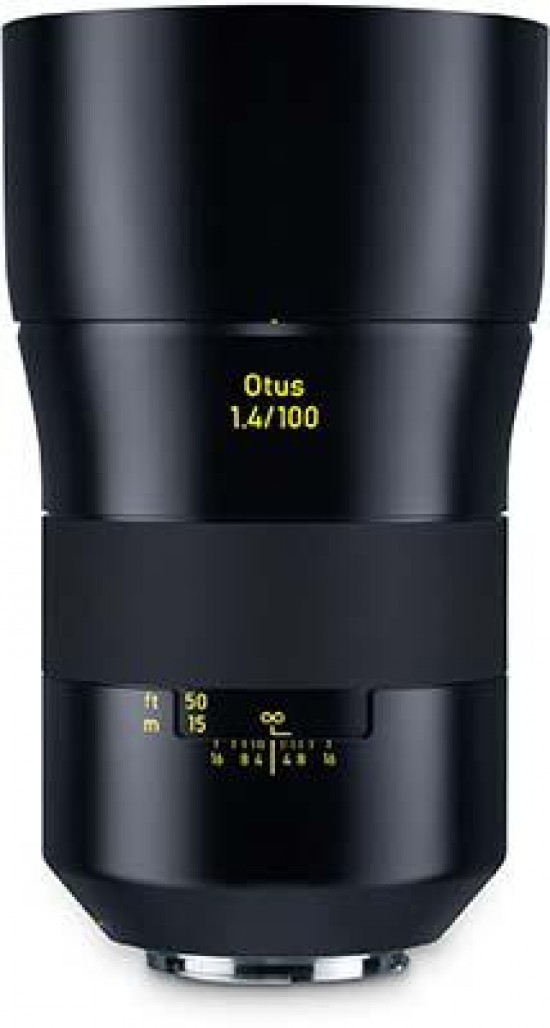 Announced in April 2019, the brand new Otus 100mm f/1.4 lens from Zeiss joins its existing line-up of manual focus DSLR lens in the Otus range. It is available in either Canon EF or Nikon F mount, but it can be used with mirrorless models via an adapter.

At launch, Zeiss claimed that the 100mm Otus lens is one of the best in its class thanks to a variety of factors including low sample variation, outstanding imaging performance and superior build quality. Indeed, Zeiss also says that the quality of the lens gives the look of using medium-format cameras, even though it is designed for full-frame sensors.

The lens design of the Zeiss Otus 100mm f/1.4 incorporates aspheric lenses and special glass which is designed to keep chromatic aberrations and distortion to a minimum. There are 14 lens elements in 11 groups. It’s claimed that even when shooting against light, T* anti-reflective coating keeps reflections and stray light under control.

For the purposes of this review, we have been using the Nikon ZF.2 mount version of the lens. There are some slight differences in the lens construction between the two models.

This is a lens which features the highest quality construction, something which is revealed by its all-metal construction. It feels like it can withstand some serious usage, while mount itself is also a high quality. To attach the lens to your camera, you need to align the blue dot on the lens mount with the white dot on your camera (may be slightly different with the Canon version), and lock it into place. 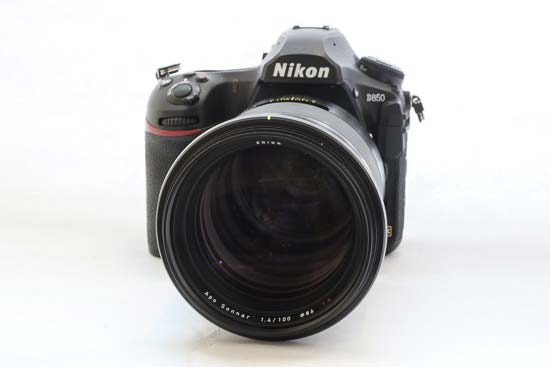 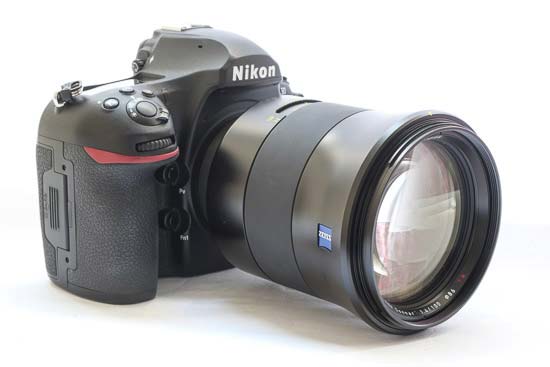 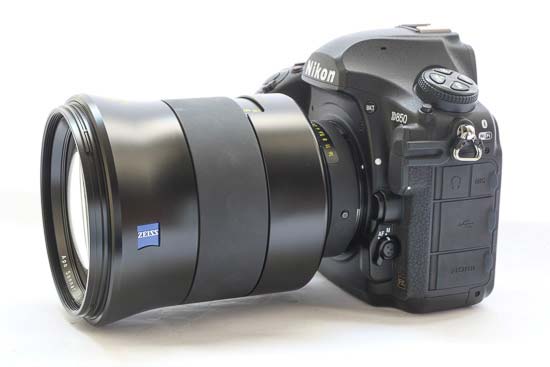 In terms of using the Zeiss Otus 100mm f/1.4, although it’s not “easy” to use, it is a relatively straightforward setup. At the base of the lens, you’ll find an aperture ring. If shooting with a Nikon DSLR, such as the D850, you’ll need to go into the settings menu and activate the aperture ring via the custom settings menu. You’ll find the option under “customize command dials”, and then “customize command dials.”

If you don’t do this, you’ll need to set the aperture ring to the f/16 position, and then use the dials on your camera to choose the aperture you want. You’ll notice that once you reach the f/16, the aperture lens locks in place, which is great for preventing accidental changes. If you need to release the aperture ring, a small pin can be pushed on the side of the lens to unlock it. When using the lens with the Z7 via an F-mount adapter, you won’t be able to use the aperture ring. 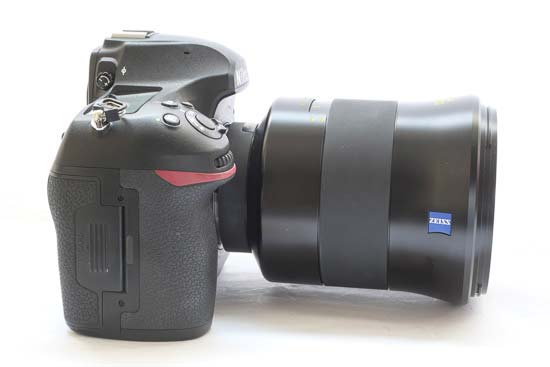 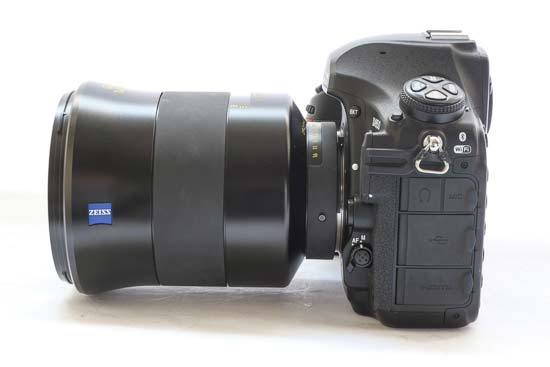 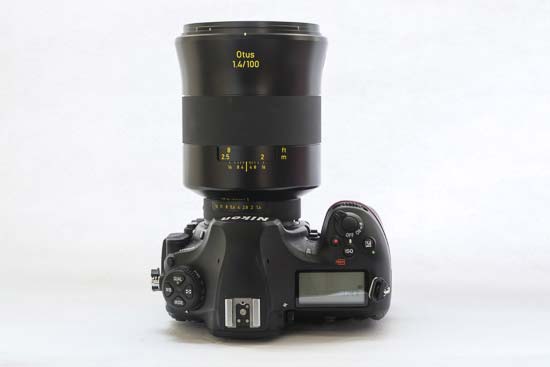 Moving forwards to the body of the Zeiss Otus 100mm f/1.4, focus distances are marked in both feet and metres, which is perhaps more useful for this lens than others considering it is manual focus only. A large focusing ring is found in the middle of the lens, which features a rubberised grip. There’s a decent amount of give to the focusing ring, which makes precise focusing a little easier.

If you’re not used to working with manual focus only lenses, using something like the Zeiss Otus 100mm f/1.4 lens is likely to come as a bit of a shock. It’s a completely different way of working that requires you to be a little more patient and precise. It can be very easy to miss focus when using a lens like this, especially when shooting at the widest aperture, but it is something you learn to get better at with enough practice. 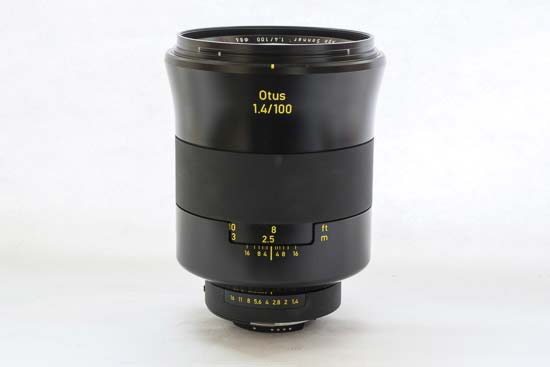 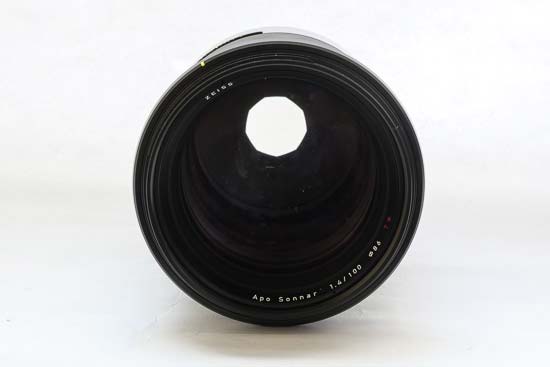 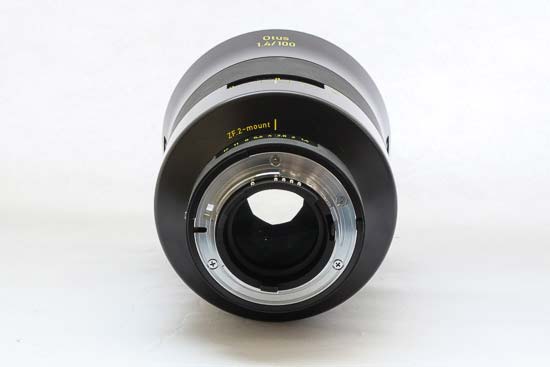 Probably the best way to ensure critical focus is to mount the lens on a tripod and switch to using Live View when working with a DSLR. This way you can zoom into the scene to make sure everything is sharp, as well as use other tools such as focus peaking to help ensure accuracy. For this reason, using this lens with a camera like the Nikon Z7 is helpful as you can magnify the scene in the viewfinder and switch on focus peaking to assist you.

The Zeiss Otus 100mm f/1.4 is a manual focus only lens, and as such you use the focusing ring around the centre of the lens to achieve sharp images. There are hard stops at each end of the focusing ring to help you realise when the closest focusing distance has been achieved, or infinity focus. Manual focusing takes precision and practice to get right, but you are rewarded with very sharp images if you can persevere. 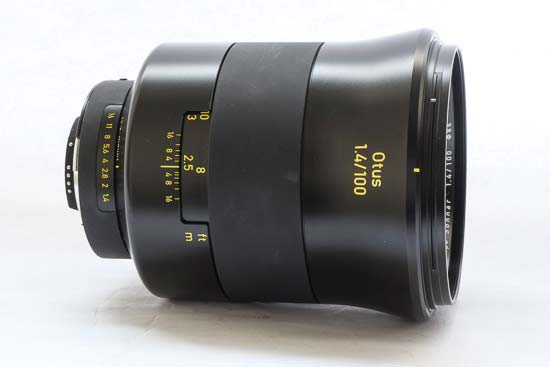 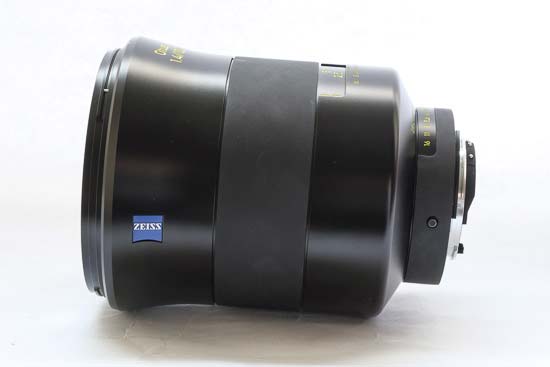 Thanks to the heavy weight and large size of the Zeiss Otus 100mm f/1.4, this is not really something to be used one-handed. You will almost definitely need to use your second hand to stabilise the lens - especially given that the lens does not include inbuilt stabilisation, and you may be using it with cameras such as the Nikon D850 or Nikon D5, which also don’t have stabilisation in the body. You might find sharper results with the Z7 at slower shutter speeds, as it does have IBIS baked into the body. Unless you have extremely steady hands, it’s recommended that you keep shutter speeds on the fast side (1/200 or quicker) to help ensure sharp images. Also included in the box is a metal lens hood. 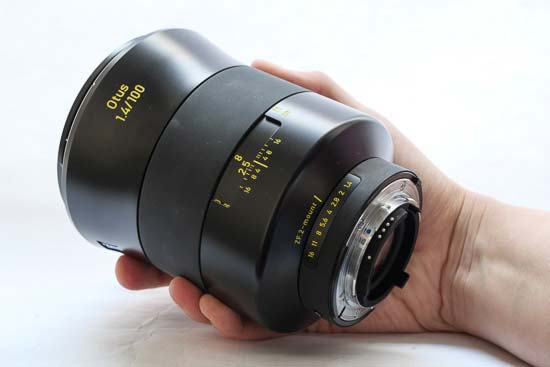 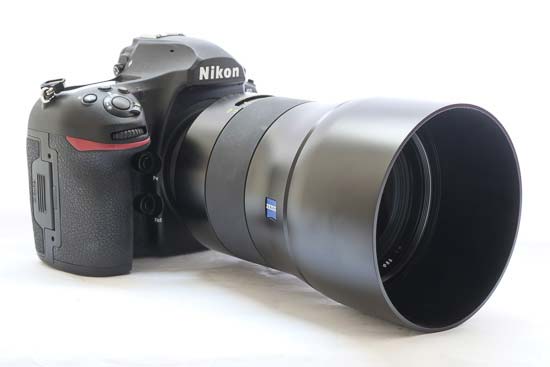 The focal length of the Zeiss Otus 100mm f/1.4 lens is 100mm. As it is designed for full-frame cameras, there’s no crop factor to consider. However if you either use the lens with a APS-C camera, or use it on a full-frame model with crop mode activated, you can expect a focal length equivalent of 150mm (Nikon), or 160mm (Canon). The angle of view is 20.2 degrees. 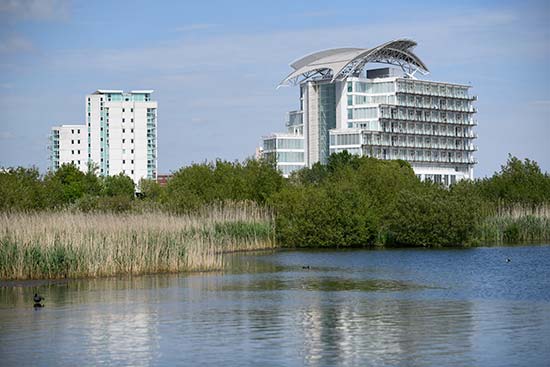 Usually characterised as purple or blue fringing alongside high-contrast edges in an image, chromatic aberration can be problematic for cheaper or lower quality lenses. We have found barely any incident of this happening with the Zeiss Otus 100mm f/1.4 lens, but on occasion you can find some very slight fringing if examining an image at 100% and are really scrutinising it. It’s unlikely you’d notice fringing like this at normal viewing and printing sizes.

As we’d expect from a lens with such a wide aperture, this is some vignetting to be seen when shooting at the widest aperture of f/1.4. This is mainly apparent when shooting a subject such as a white wall - in most normal circumstances, it’s not likely to be so obvious. Stopping down to f/2.0 removes the effect considerably, before becoming practically non-existent at f/4.0. 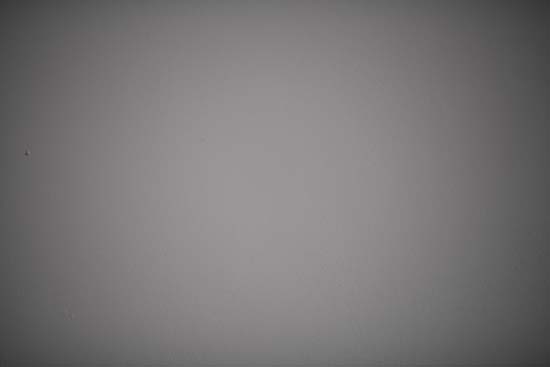 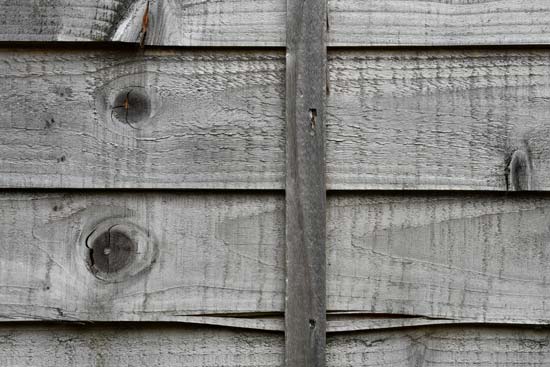 The Zeiss Otus 100mm f/1.4 lens is not designed as a macro lens, but thanks to its focal length, it’s a good option for typical macro type subjects, such as flowers. The closest focusing distance is one metre, while the maximum magnification is 1:8.6 at this distance. 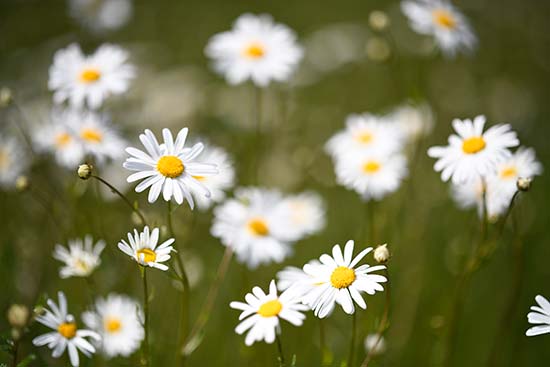 Typically defined in subjective terms, like creamy, smooth or pleasing, bokeh is the word for out of focus areas in an image. The Zeiss Otus 100mm f/1.4 lens has a very wide maximum aperture of f/1.4, and thanks to a superior lens construction promises superb bokeh, which it really does deliver. Out of focus areas are rendered both beautifully and naturally, while there’s no evidence of “onion ring” type markings in circular shaped bokeh. Since opinion of the quality of bokeh is often a subjective thing, we have included some sample images below for you to judge for yourself. 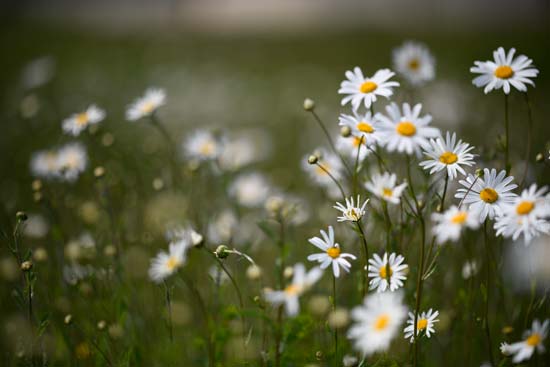 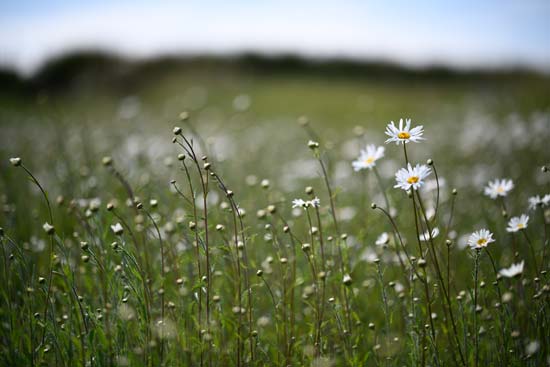 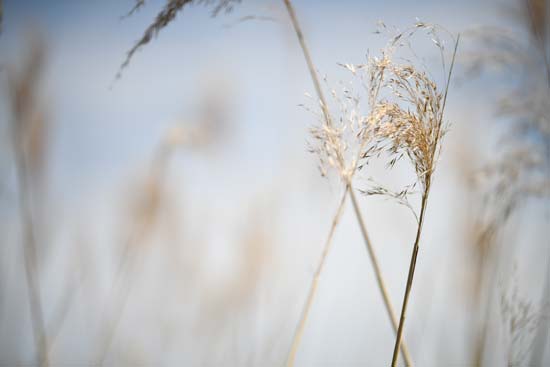 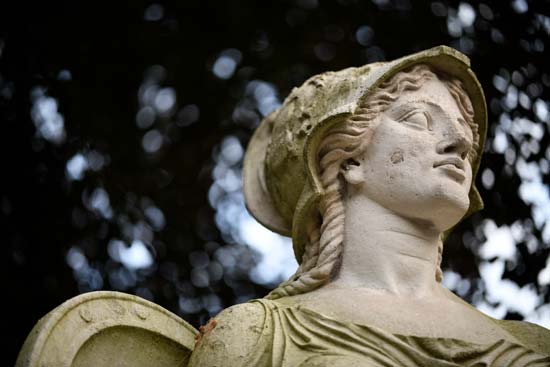