The Zuiko Digital ED 50mm f2 Macro is one of two macro lenses offered by Olympus for the E-system. With its environmental seals and fast maximum aperture, it belongs to the manufacturer's High Grade line of lenses, yet at less than $450, it is decidedly affordable for a wide range of photographers. It's also worth noting that, like most macro lenses, it doubles as a short telephoto prime, well suited to portraiture and a number of other uses. As an E-system lens, the Zuiko Digital 50mm Macro is compatible with all Four Thirds bodies (and, with an adapter, Micro Four Thirds cameras as well); but it won't mount on Olympus' OM line of 35mm film SLRs.

The Zuiko Digital ED 50mm f/2 Macro is slightly "fat" for a 50mm lens, but very compact for a fast tele. The slight fatness is due to both the optical design - which is considerably more complex than that of a typical 50mm optic -, and  the dust-and-drip-proof construction that is a hallmark of Olympus' High Grade - and Super High Grade - lenses. In "absolute" terms, the 50mm Macro still counts as a small and lightweight lens that does not look out of proportion on any Four Thirds body. 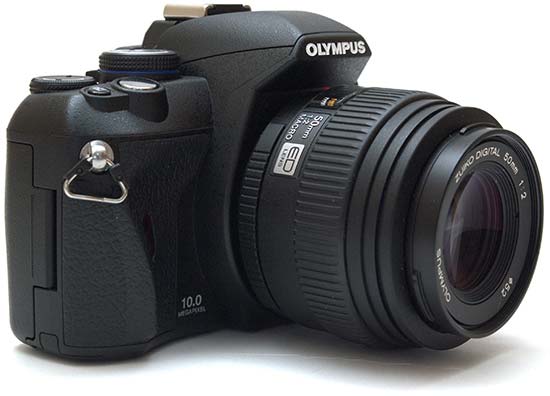 As befits a High Grade lens, the Zuiko Digital 50mm Macro has a metal bayonet mount, glass optics and good overall build quality. In light of this, its weight of 300 grams can be considered moderate. 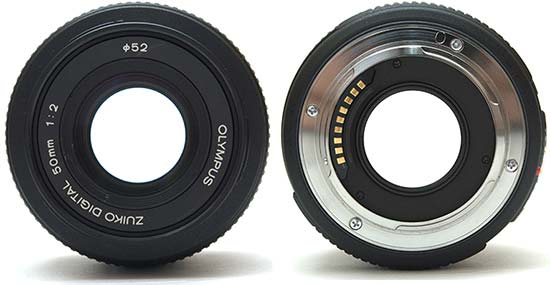 The front of the lens is threaded and accepts filters of 52mm in diameter. The front lens element does not rotate while focussing, but the barrel does extend quite a bit when going from infinity to close focus. This is quite typical of a macro lens - what is notable by absence is the indication of the magnification values on the extending part of the barrel, which we consider an odd omission; especially given that even Olympus' own (and cheaper) 35mm f/3.5 Macro does sport a magnification scale. 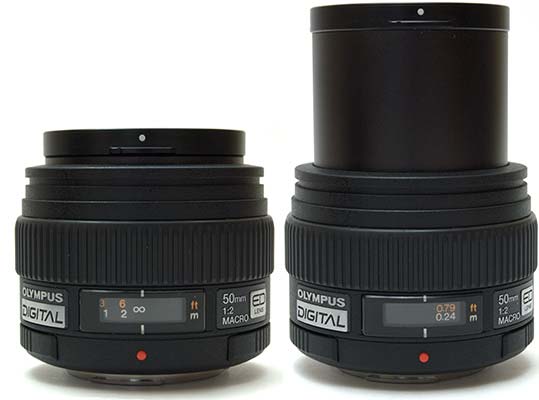 The focus ring is not mechanically coupled - by rotating it, you are actually giving impulses to the autofocus motor that moves the lens elements. This may sound disconcerting to photo traditionalists but in reality, about the only time you will notice this is when you reach either end of the focus range. In this case, the focus ring keeps on rotating, instead of coming to a hard stop. There's even a distance scale sheltered behind a window, although there are no deph-of-field marks.

Missing features include image stabilisation and a focus limiter. The former is arguably less important, given that many FourThirds bodies offer a sensor-shift anti-shake function anyway, but the latter can be a problem.

With respect to accessories, Olympus offers the EX-25 macro extension tube, the TF-22 twin flash and the RF-11 ring flash for the macro enthusiast, and the EC-14 for those who need a little more telephoto reach.

Macro lenses tend to autofocus in a relatively lazy fashion, and the Zuiko Digital ED 50mm f/2 is no exception to this rule. Your camera does matter a lot in this case though - AF speeds will be noticeably better with the lens mounted to an Olympus E-30 or E-3 than any other compatible body.

Autofocus accuracy is quite good, but when the system does miss the target, hunting will occur. This is when the aforementioned omission of a focus limiter strikes back - it takes quite a bit of time for the lens to rack through its vast focus range. Switching to manual focus is probably the best thing you can do in this case.

Lateral chromatic aberrations, often seen as purple fringes along contrasty edges, can be occasionally noticed in photos taken at maximum aperture, but stopping down cures the problem in this case too. The two crops below are representative of what you can expect in the worst case.

Longitudinal chromatic aberrations - false colours in the out-of-focus areas - can also be a problem sometimes, especially given that they cannot be corrected by in-camera processing. The following crops demonstrate the problem.

During our field testing of this lens, we did not encounter any field-relevant light fall-off in the image corners.

Olympus claims a maximum magnification of 0.52x for this lens, and our findings bear this out. The smallest area with which you can fill the frame is about 33x25mm, considerably less than the size of a Compact Flash card. Maximum magnification is achieved at a sensor-to-subject distance of 20cm. 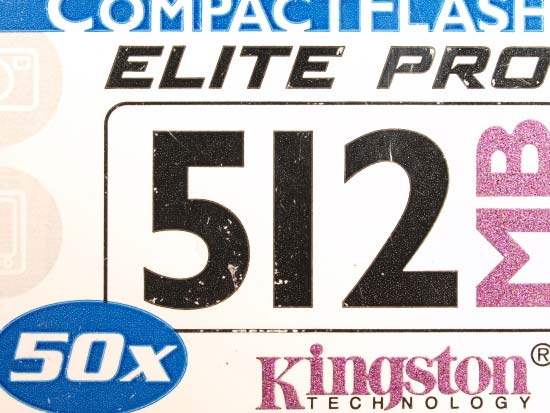 Bokeh is a word used for the out-of-focus areas of a photograph, and is usually described in qualitative terms, such as smooth/creamy/harsh etc. If the camera-to-subject distance is short, the subject-to-background distance is great and the background is fairly homogeneous in terms of colour and tonal values, you can achieve very smooth bokeh with virtually any lens. There is not much point in testing bokeh in such ideal conditions. It is usually only when you have to make do with less cooperative backgrounds that lens design comes into play. These examples are from the out-of-focus areas of photos where the camera-to-subject distance was a couple of metres, and the backgrounds were varied. Since bokeh evalutaion is subjective, these illustrations are provided with no comments, leaving it to you to draw your own conclusions from them.