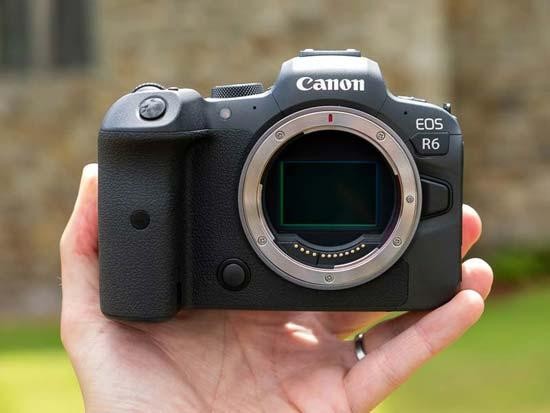 We've spent a little hands-on time with the brand new Canon EOS R6 mirrorless camera, so ahead of our full review, check out our first impressions now...

The EOS R6 has a 20 megapixel sensor that's very similar to the one found in the flagship EOS-1D X Mark III DSLR camera, but with a different low-pass filter construction.

The Canon EOS R6 can record 4K video up to 60p in 10-bit, achieved through oversampling from 5.1K.

Slow-motion footage is also available with AF support using Full HD at up to 120fps.

The next generation Dual Pixel CMOS AF II system on the EOS R6 offers the world’s fastest AF, with the camera capable of focusing in as little as 0.05 seconds. It has 6,072 selectable AF points, slightly more than the EOS R5.

Impressively the EOS R6 can also focus in light levels as low as -6.5EV, which is 0.5-stop better than the EOS R5.

Thanks to its Digic X processor, the EOS R6 offers exactly the same deep learning based automatic face, eye and animal AF tracking modes as the R5.

The design and ethos is reminiscent of the 60D and 7D DSLR lines being merged into one.

The EOS R6's back panel is exactly the same as on the EOS R5, but the top-plate is a little different.

Instead of the LCD status panel and Mode button found on top of the EOS R5, the R6 has a more conventional shooting mode dial on the right in place of the LCD panel, which we suspect some users will actually prefer.

The rear offers an array of controls that will be instantly familiar to anyone who has used an EOS 5-series camera before, including the classic Canon control wheel.

This means that the innovative / controversial (delete as appropriate) Mfn bar that made its debut on the EOS R is only conspicuous by its complete absence on the new EOS R6, with Canon explaining that a thumb-operated joystick was more appropriate for the new model's target audience.

While this may be true, we were struck by how high the joystick is positioned on the rear of the Canon R6 - almost inline with the centre of the viewfinder, rather than where the Info button is - which seems rather too high to find easily, especially compared with most other cameras that have this key control.

The Canon R6 also benefits from both a tilting LCD screen and dual memory card slots for the first time in Canon's fledging full-frame mirrrorless system (along with the R5).

Although not quite as highly specced as the EOS R5, the 0.5inch 3.69 million dot EVF on the EOS R6 is still impressive to look through, working up to 120fps.

Despite the EOS R6 having a polycarbonate body rather than the EOS R5's magnesium alloy body, impressively it still offers the same level of weather-proofing as the EOS 6D Mark II DSLR.

For the first time ever in the EOS series, the Canon EOS R6 incorporates 5-axis In-Body Image Stabilisation (IBIS), which has been designed to work collaboratively with the IS system of RF lenses.

This intelligent stabilisation system corrects at up to an incredible 8-stops – the world’s best image stabilisation – allowing you to hand-hold the camera for up to 4 seconds and still get sharp results.

Even better, the 54mm diameter of the of the RF Mount enables some non-IS RF lenses such as the RF 85mm F1.2L USM or RF 28-70mm F2L USM to also achieve up to 8-stops of image stabilisation.

The EOS R6 can also stabilise older, non-IS lenses including any EF lens that is fitted to the R6 via the Canon EF-EOS R mount adapter. Just think of all that vintage EF glass which will instantly be stabilized when mounted on the new EOS R6!

The EOS R6 offers continuous shooting at up to 20fps with the silent electronic shutter or 12fps with the mechanical shutter, both with full auto exposure (AE) and auto focus (AF) tracking.

With built-in Bluetooth and 2.4Ghz Wi-Fi (slower than the EOS R5), the EOS R6 can be easily connected to a smartphone and networks allowing high-speed file sharing and FTP/FTPS transfer.

The LP-E6NH is a new longer life battery supplied with both the EOS R6 and EOS R5. It's backwards compatible with all existing cameras that use the LP-E6 series batteries. LP-E6NH replaces LP-E6N, with an increased capacity of 14% reaching 2130mAh.

The same BG-R10 battery grip that the EOS R5 uses also gives users the ability to power the EOS R6 using two batteries (LP-E6/N/NH) and also offers duplicate controls for easier vertical shooting. Note that the batteries have to be charged whilst the grip is fitted on-camera.

Note that the new WFT-R10 Wi-Fi transmitter pictured above only works with the EOS R5, and not the EOS R6.

Somewhat inevitably the EOS R6 will be overshadowed at launch by the flagship EOS R5, but if you don't actually need 8K video, the R6 is a still very capable and much more affordable proposition that's a big step-up from the EOS R.

What do you think - does the EOS R6 set your pulse racing, or is it playing it too safe? Leave a comment below!